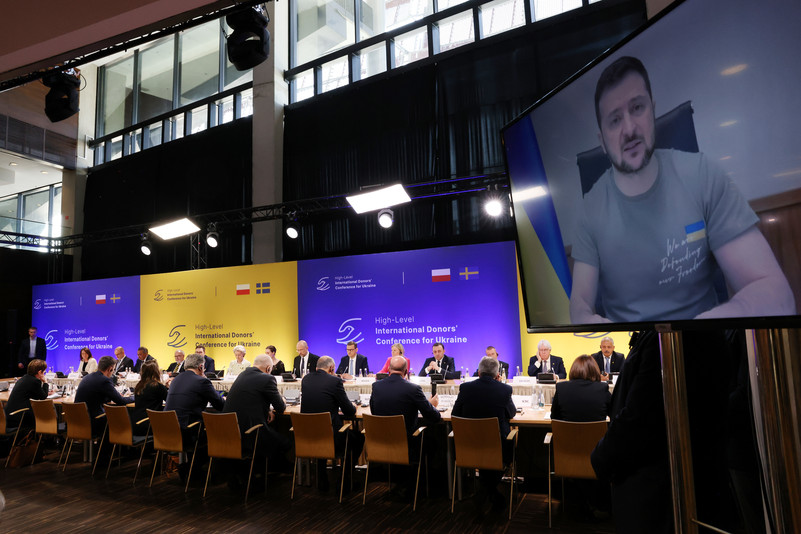 Countries such as Finland, France, the Czech Republic, Croatia and others pledged millions of euros to support humanitarian and military efforts in Ukraine as part of the conference hosted by Poland and Sweden.

“The humanitarian needs of the population and the economic situation of the country call for a new effort by the international community which meets the needs linked to the destruction of civilian infrastructure,” Macron said.

The EU Commission also pledged €200m in aid for displaced people in Ukraine, the executive said a statement.

“We will do everything in our power to stop Russia and sure Ukrainian victory,” Morawiecki said at the conference.

Poland’s government argued that Ukraine’s needs are huge as Russian aggression damaged the country and forced millions of Ukrainians to flee the country.

and only three thousand tonnes are delivered currently.

Ukraine needs €5bn per month to keep the state running, according to the International Monetary Fund.

The Polish premier said the conference shows that the world is not indifferent to Russia’s “genocidal war”.

“You are not fighting for you homeland, independence and freedom, but also ours,” Morawiecki told the conference.

“Together we will demonstrate that European values are not empty words but that they are backed with action,” he added.

“We want to build a new European country,” he said on after the war.

Companies such as Google and Covid-19 vaccine-maker AstraZeneca joined the nations in pledging aid.

Ukrainian president Volodymyr Zelensky on Thursday also announced the launching of a global crowdfunding platform to help Kyiv win the war with Russia and rebuild the country’s infrastructure.