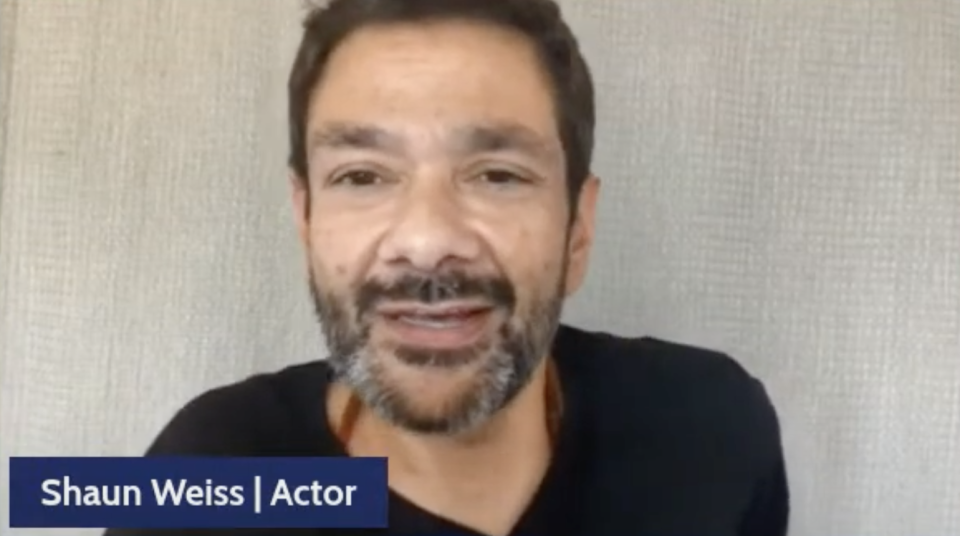 Shaun Weiss is candid about his addiction battle.

The former child star, known for his role as goalkeeper Greg Goldberg in the ducks film franchise, has struggled publicly in recent years. His addiction to methamphetamine and heroin led to homelessness and multiple arrests. He is making progress in his recovery, which he explained in conversation with Addiction Talk. Sober for two years now, he said he felt “reborn.”

Weiss admitted it’s “hard to see” that the photos of himself are unrecognizable from the three-year period he struggled with addiction.

“I looked terrible and deadly,” he said. At the time, he didn’t know what he looked like, explaining that he didn’t look at mirrors or his reflection for months. When he finally did, it was “shocking.”

He dropped to 96 pounds and “was infested with bugs in my hair,” he said. He would steal $1,000 worth of electronics a day to maintain his habit. “That’s not normal. That’s not like taking a few extra pills. This is a very serious problem… I was in a horrible condition. I would probably die if those nice sheriff cops didn’t step in and save me” , citing his arrest in 2020 for breaking into a car while high on meth (He had previously been arrested twice in 2017 for petty theft and possession of methamphetamine and twice in 2018 for public intoxication and shoplifting.)

Weiss said he drank alcohol and smoked weed in his younger days, but his world didn’t collapse into a perfect storm – his father died, he broke up with his fiancée, a job he’d worked on fell through and he couldn’t do it can’t afford a new place to live.

“It was like the perfect convergence of a lot of things,” he said. “And it was really too much for me.” He said he was heartbroken and felt like someone was sitting on his chest. The first time he tried meth, it “was instant relief” for those suffocating feelings.

He said: “It was very shortly after the first time I had ever seen a hard drug… to where it completely absorbed me. Within less than six months I was a real drug addict.”

While living on the street, he lost his phone – and his contacts. Besides, he admitted, he had already burned many bridges by then. Alone with only drugs, he had “nobody to hold him accountable.” Soon it got to a point “where I had so much shame about what I had become, what my lifestyle was like, that I didn’t want to reach those people. [anyway]. I didn’t want them to see me as I was.”

In those years, “What was literally going through my mind was: I’m going to get this next bag of dope… get high… [and then] I’m never going to use again… I’m going to climb out of here. I’m going to recover. And I had that mentality every day. Every bag I did for three years, [I’d tell myself] was the last bag I would ever do. It just went on and on and on.”

He said it had gotten to the point where he was “hopeless” and “didn’t think I’d live long.” He would think about writing farewell notes for his loved ones.

Weiss entered rehab in 2018 and then had a relapse. He attributes his arrest in 2020 as a wake-up call. He spent about 40 days in jail for the car break-in and couldn’t imagine doing it for three years, which was the sentence he risked. The judge placed him in a drug diversion program and he began to receive the treatment he needed.

He admitted his original plan was to placate people by getting sober for “as long as it took and then… go and get high again.” However, during treatment, things started to shift. He recalled watching the 2018 movie Julia Roberts and Lucas Hedges called: Ben is back in the group room during the treatment.

“There’s a scene where a heroin dealer throws a big bag of heroin on the table — and normally I’d see this bag and start fantasizing and wishing I could have it,” Weiss. “This time I saw the bag and I felt physically rejected… I thought, ‘Oh my God.’ I started to cry and cry.” He realized at that moment that ‘recovery is possible’.

He said part of his recovery had to do with taking care of himself. He focuses on religion and meditation and has developed a yoga practice. He has a hip injury, but loves to cycle and get out into nature. He writes and reads books that inspire him. What he learned during treatment was that he should try to “create a life you don’t have to escape from.”

Weiss said that child stardom — and that he got so much at a young age — played a part in his addiction.

“It made me an adrenaline junkie,” said Weiss, who lived in a frugal house after rehab. “Things were a lot more exciting for me than the average 13-year-old — traveling and flying to places and being in movies. So I was very addicted to the excitement of things. And when that went away, I didn’t. And I found that in drugs – not necessarily the drug itself, but I’m one of those guys who enjoys the feeling of doing something naughty that I shouldn’t be doing that. That was an important part of the high for me.”

Also: “I never really appreciated things before. I had a BMW, I wanted a Ferrari.” While today, after he’s survived everything he’s been through, he says, “I appreciate every breath. So that’s a shift too when you start living in gratitude.”

He said the period when he was addicted is now “a blur”. “I can’t even look back and imagine it was me. It’s like a different person. So I can’t imagine what would have to happen to get me back into a mindset where I no longer care about life and don’t longer to see my loved ones. I can’t imagine coming there again.”

In addition, he looks ahead. Weiss, who had a smile makeover to replace his drug-decayed teeth, is back in the act. In April he got his first movie role – Lionsgate’s jesus revolution – in 14 years. He hopes more roles will follow, but is also thinking about doing his own project in which he tells the story of his addiction.

He remains grateful ducks fans for supporting him at his low point, which kept him going through his sober journey.

“I was in a jail cell and the deputy came forward and he said, ‘Hey man, your fans really support you,’” he said. “I’m like, ‘What are you talking about?’ I didn’t know what was going on… I was doping sick, was in a cell and that was the little flash of light for me, knowing that there are people who care. That started to grow. I finally felt an obligation. .. to get better for them. I didn’t want to disappoint these people because they were invested in my recovery.”

He added: “I’m really sorry ducks fans wanted to see me like this, but i hope my story can be helpful. So it’s not just a sad event. I’m trying to do something with it.”

If you or someone you know is struggling with addiction, contact the Substance Abuse and Mental Health Administration Helpline Treatment Treatment at 800-662-HELP (4357)