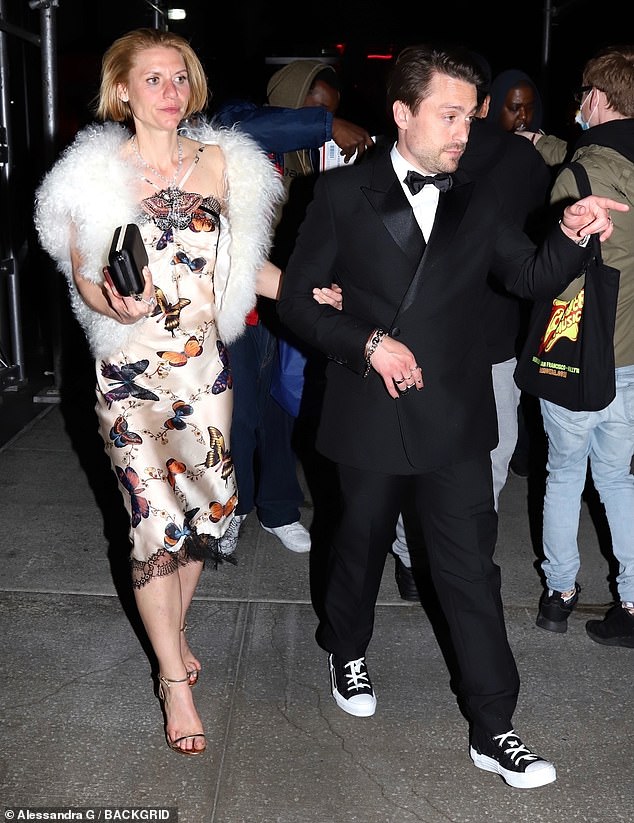 The actor, 39, dressed to impress in a dashing tuxedo, while keeping his feet comfortable in a pair of black high top trainers.

He looked effortlessly cool at the Met Gala itself earlier in the evening, sporting a pair of black sunglasses while posing at the star-studded event.

Looking good: The Succession star, 39, dressed to impress in a dashing tuxedo at the Met Gala itself earlier in the night, while keeping his feet comfortable in a pair of black high top trainers

Claire, 43, who starred alongside Kieran in Igby Goes Down in 2002, donned a satin dress with a butterfly midi dress which she teamed with a white shawl and gold heels.

Kieran, who is the younger brother of former child star Macaulay Culkin, has been married to his wife Jazz Charton since 2013 and they have two children together.

Earlier in the night, Claire arrived at the Met Gala with husband Hugh Dancy, 46, on her arm.

Exploration of the city: the talented couple then strolled through the streets of Manhattan

Exciting: They were heading to the Standard Hotel Met Gala afterparty

Pals: Claire placed a friendly hand on Kieran’s back as they reached the posh venue

Dashing: He looked effortlessly cool in a pair of black sunglasses while posing at the star-studded event

The Metropolitan Museum of Art Costume Institute Benefit, also known as the Met Gala, is considered by many to be the “Super Bowl of celebrity red carpets.”

Fashion’s biggest night is traditionally held on the first Monday in May to raise money for the Costume Institute in New York, with last year’s event being moved to September due to the pandemic.

Gorgeous: Earlier, Claire stood out in a stunning lemon dress for the Met Gala in New York, arriving with husband Hugh Dancy

Family: Kieran, who is the younger brother of former child star Macaulay, has been married to Jazz Charton since 2013 and shares their two children (pictured at the Golden Globe Awards in 2020)

Star-studded: Kieran met his stunning wife Jazz, who wowed in a chic ensemble after the main event

There it is: Kieran is best known for his role as Roman Roy in Succession

Vogue editor-in-chief Anna Wintour once again oversaw the benefit as chairwoman, a position she has held since 1995. Her fellow honorary co-chairs are designer Tom Ford and Instagram executive Adam Mosseri.

Wow! Cardi B showed off her killer curves in a plunging dress for her Met Gala afterparty

Star-studded: The Metropolitan Museum of Art Costume Institute Benefit, also known as the Met Gala, is considered by many to be the “Super Bowl of celebrity red carpets.”

As usual, the sartorial theme comes from the exhibition launched by the gala: “In America: An Anthology of Fashion”, which is the second of star curator Andrew Bolton’s two-part exhibition exploring the roots of American style. .

Bolton said eight directors created what he called “cinematic vignettes” in the period rooms of the museum’s American wing.

The other four are Ford, the famous fashion designer who is also an acclaimed director, Janicza Bravo (Zola), Julie Dash (Daughters Of The Dust) and Autumn de Wilde (who directed the Jane Austen adaptation of Emma and is also a photographer).

Throwback: Claire starred alongside Kieran in Igby Goes Down in 2002 (both depicted in character)

Similar to the September event, there were 400 guests this year, down from pre-pandemic highs of 500-600 attendees.

The first part of the exhibition will remain on display in the halls of the Anna Wintour Costume Center, as well as the second part, until September 5.

More than half of the pieces in the opening exhibition will be rotated and designer clothes that have not yet been presented will be displayed.

The Met Gala is a huge source of revenue for the museum and provides the Costume Institute with its main source of funding.