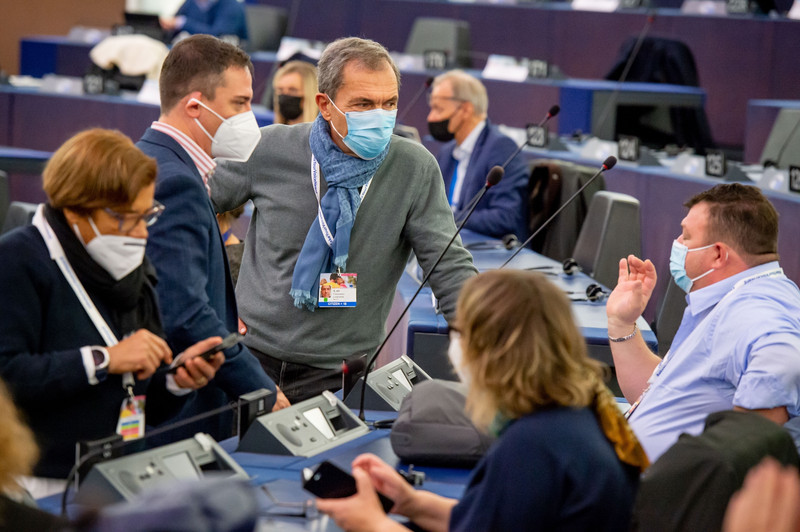 The European Parliament on Wednesday (4 May) adopted a resolution urging a change in the treaties — in order to implement the imminent conclusions of the Conference on the Future of Europe.

The call for a convention comes ahead of the closing event in Strasbourg on Europe Day (Monday, 9 May), where the outcome of the year-long conference will be presented in a report by EU leaders.

This democratic experiment was finally launched last year — after a Covid-delay — in a bid to bring Europe closer to citizens and give them the chance to express their opinions on the continent’s future.

But its success relies on what happens next — and it still risks backfiring if it does not deliver results.

“Let’s not be afraid of change,” Lithuanian centre-right MEP Andrius Kubilius said during the plenary debate in Strasbourg.

The EU Parliament’s committee on constitutional affairs has been tasked to start the procedure for a convention, with a vote expected in June.

If a majority of member states agree that the treaties should be revised, a convention will be then convened to reach an agreement on the changes required.

Nevertheless, such procedure is perceived as lengthy and laborious — and the limited success of the previous convention in 2003 calling for an EU constitution still lingers in people’s minds.

“The only way to be true to the conclusions of the conference is to call for a convention,” said Belgian MEP Guy Verhofstadt, pointing out that the EU parliament should “lead” on turning the recommendations of citizens into reality.

Verhofstadt said Wednesday’s resolution pushes “to maintain the ambition” and implement even the most difficult of citizens’ recommendations.

Overall, the conference has delivered 325 proposals based on recommendations from citizens’ panels, input from the national events, and contributions recorded on the multilingual online platform.

They include calls for adding European values in the school curriculum, the creation of an EU army, strengthening the role of the EU parliament, ensuring the full integration of all migrants and reopening the debate on an EU constitution.

Some of the recommendations would require treaty changes.

EU citizens, for example, have called for the abolition of the veto in several areas of EU decision-making that require unanimity and for a common health system in which healthcare is a shared competence between the EU and member states.

But the controversial debate on revising the treaties has proven to be highly divisive in the past.

And EU conservatives and Euro-sceptics have slammed the legitimacy of the conference — hoping the EU council will reject the calls for a convention.

Polish MEP Ryszard Legutko, one of the leaders of the European Conservatives and Reformists Group, said: “Ultimately, it will be the council which will decide”.