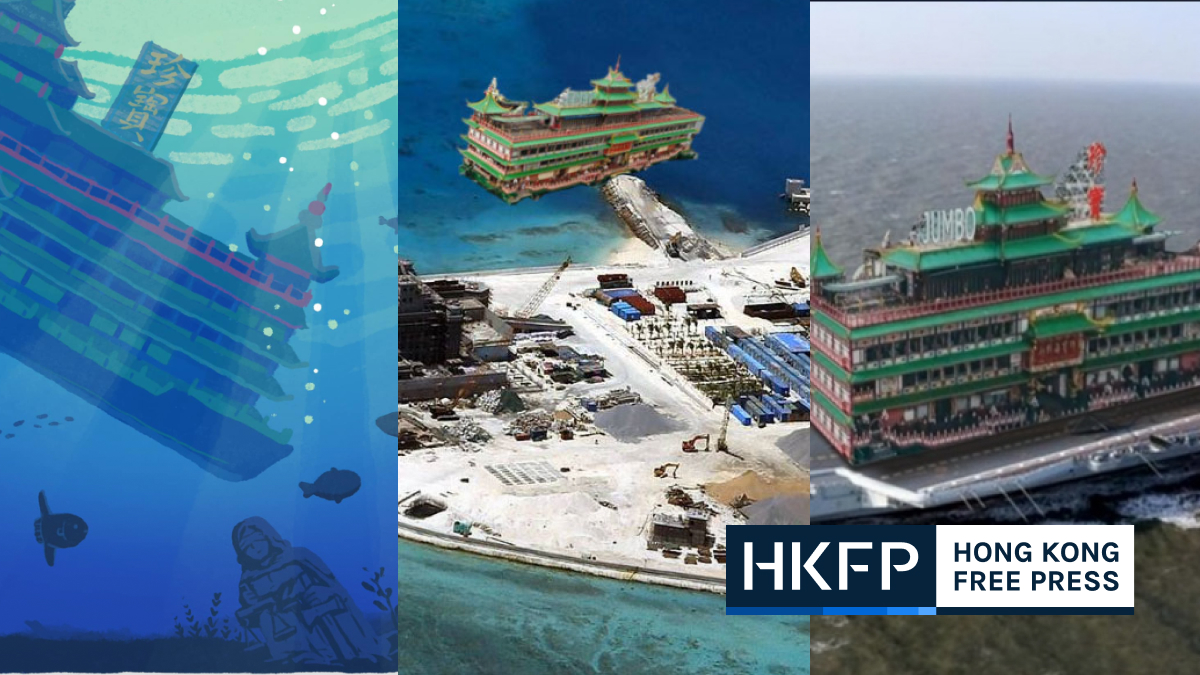 Hongkongers have been sharing memes and metaphors, as well as conspiracy theories, in reaction to the untimely demise of the Jumbo Floating Restaurant.

On Tuesday, the Marine Department requested a report into what happened to the iconic seaborne eatery, which sank in the South China Sea on Sunday when passing the disputed Paracel Islands – also known as the Xisha Islands.

Photoshop master SurrealHK was among two artists who appeared to predict Jumbo’s destiny.

He shared an image of Jumbo entering its watery grave on June 14. Self-exiled political cartoonist Ah To posted a picture of the restaurant beneath the waves on June 1.

On Tuesday, SurrealHK posted an updated image of the ill-fated Jumbo flotilla in its heavenly afterlife.

On Twitter, Transit Jam posted an image of Jumbo parked at the Chinese military base in the disputed archipelago.

One Twitter user said “Jumbo does a Titanic,” whilst another quipped: “Swear to God, if this thing shows up in the Spratlys with a helipad and a territorial sea claim I am going to lose it.”

Some suggested Jumbo’s fate was a metaphor for Hong Kong’s future, whilst others shared conspiracy theories that the incident was an ill-intentioned insurance claim.

Cartoonist All Things Bright and Beautiful shared an image of the sunken vessel with the quote: “[I] can imagine how happy the fish will be.”

On Tuesday, the Marine Department said it had demanded a report on the incident after it cleared the vessel to be towed to Cambodia, RTHK reported.

The department added that Jumbo’s owners had hired surveyors to ensure it was sea-worthy, though they had failed to inform the authorities of the accident before news of it was publicised.

“Despite the efforts of the towing company responsible for the trip to rescue the vessel, unfortunately it capsized on Sunday,” a statement from the restaurant’s owner, Aberdeen Restaurant Enterprises, said on Monday night.

The company added that, since the water depth exceeded 1,000 metres, it would be too difficult to carry out salvage work. No crew were injured.

The restaurant’s owners had suffered accumulated deficits of more than HK$100 million since 2013 whilst plans to revitalise it in Hong Kong fell through.

When approached by HKFP, the Hong Kong Observatory confirmed that weather conditions had been poor in the region where Jumbo sank over the weekend.

“According to our Marine Forecast over the seas near Paracel Islands on 18 and 19 June, there were moderate to fresh southerly winds, occasionally strong. Isolated showers and thunderstorms. Sea wave up to 3 [metres],” it said on Tuesday.

Aberdeen Restaurant Enterprises did not respond to HKFP’s enquiries on Tuesday.