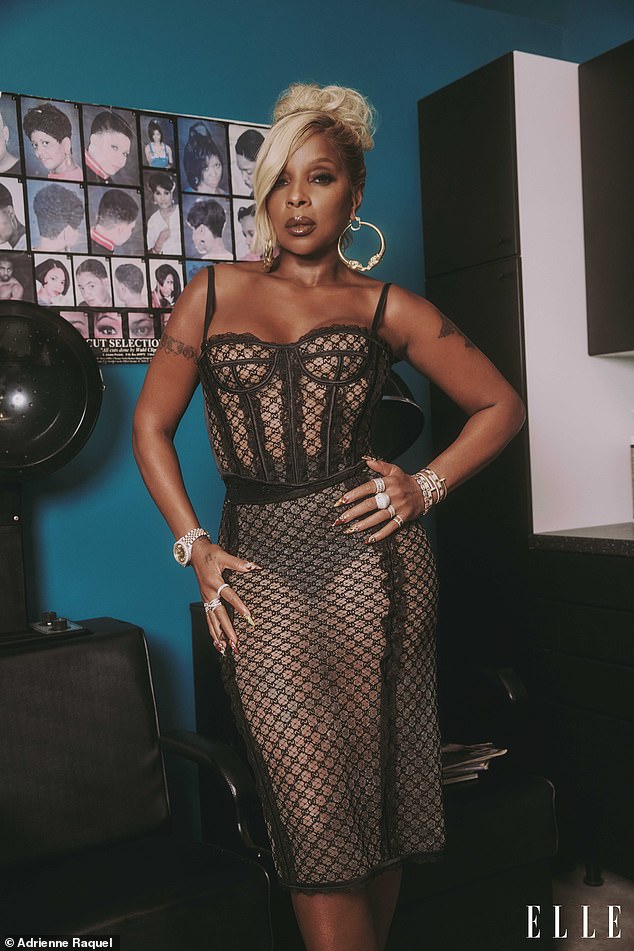 The singer, 51, looked stunning in a sexy corset dress with a sheer skirt that showed off her toned arms and legs.

The iconic entertainer talked about overcoming lack of confidence, discovering her true beauty, and performing at the next Super Bowl.

Strike a pose! Mary J. Blige looked fierce in a sexy corset dress with a sheer skirt that showed off her toned arms and legs during a cover shoot for ELLE magazine

“I didn’t feel beautiful — like for real for real, not just ‘Hey, I’m pretty’ but actually believing it — until about 2016,” she told Elle. “If someone beat you mentally, you’re never pretty enough. You’re never smart enough. Nothing is ever good enough.

Blige said she didn’t have “very much confidence” while filming the 2017 drama Mudbound, but overcame that by regularly complimenting herself in the mornings.

“When I shot Mudbound, I was at the point where I didn’t really have confidence anymore,” she said.

“This chick is beautiful,” she said to herself every morning. “So I started to believe in it and I started to congratulate myself for overcoming that feeling and that fear.”

Cover girl: Blige appears on the February 2022 cover of the fashion magazine

And thanks to her character Florence, Blige has learned to embrace her natural beauty and not put so much emphasis on wigs and makeup.

The pep talks have even found their way into her music, with her new song Good Morning Gorgeous inspired by the compliments she’s given herself on the Mudbound set.

“During Mudbound and when I was married, I felt so bad. I had to give myself the biggest compliments, even though I didn’t believe it, just so I could build myself up,” she said.

That works ! Mary exposed her body in the sexy sheer dress

“I would do it in the morning, because that’s when your hair isn’t done and you don’t wear makeup.” You’re just taking care of yourself for real.

To this day, she still says to herself in the morning, “Hello, Magnificent.” I love you. I got you. I need you.’

There’s no denying how amazing Blige looked in her glamorous salon shoot for ELLE.

The Be Without You singer looked amazing as she struck poses in an elaborate fur coat with her blonde hair cascading in loose waves and a pair of gold hoop earrings that brightened up the look.

Do not disturb! The singer flipped through a hairstyle book as she stepped back in her shiny purple boots

‘It’s like getting an Oscar nomination’: Blige, who was nominated for two Oscars for Mudbound, said of the Super Bowl halftime show

She was the epitome of cool as she sat in the living room wearing a pair of sunglasses.

Blige is now gearing up for her next big moment in the spotlight – the release of her Good Morning Gorgeous album, slated for release February 11, and the upcoming Super Bowl halftime show.

“It’s like getting an Oscar nomination,” Blige, who was nominated for two Oscars for Mudbound, said of the show.

Blige will only be able to perform one song as she is headlining with four other artists – Dr. Dre, Snoop Dogg, Eminem and Kendrick Lamar – and is considering her track Family Affair.

Blige’s last time performing at the Super Bowl was in 2001 when she sang just a few words during a mash-up with Aerosmith, NSYNC, Britney Spears and Nelly.

But this time, Blige will really be in the spotlight.

“This time I’m going to be front and center – Mary J. Blige, in her glory, her grandeur and her swagger,” she said.

Come back for more! Fans will soon hear even more new music from Mary with the release of her upcoming album Good Morning Gorgeous, due out February 11.

And thanks to her character Florence, Blige has learned to embrace her natural beauty and not put so much emphasis on wigs and makeup.