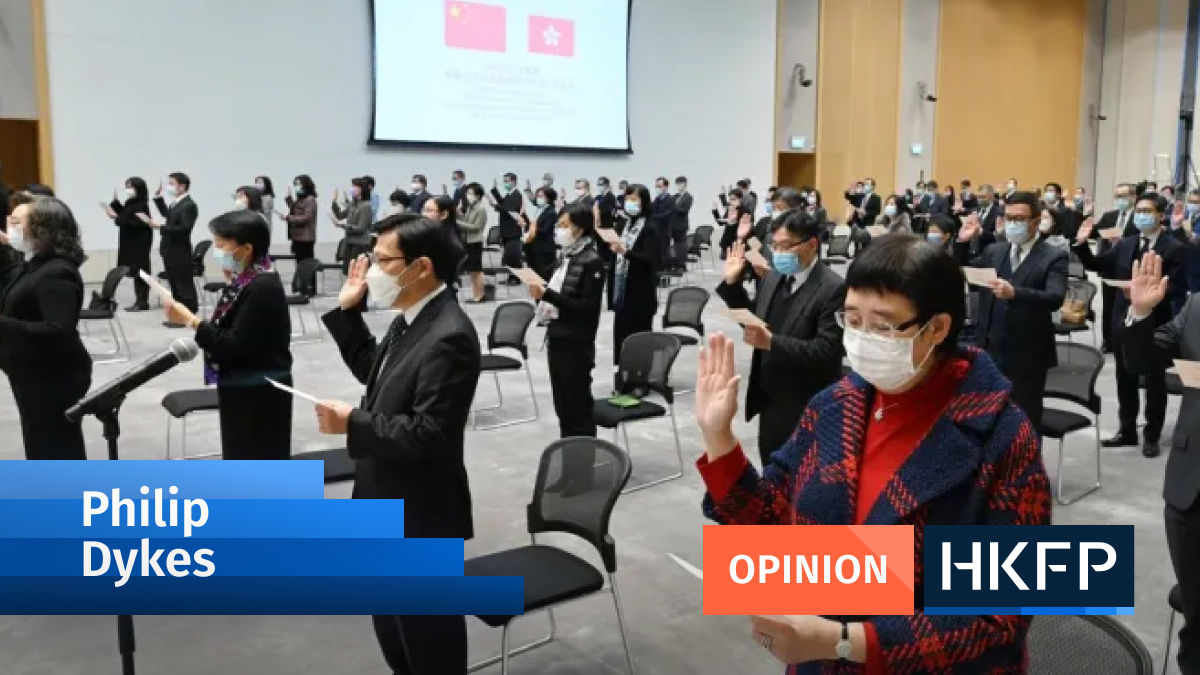 The requirement that native English teachers (NETs) working in public sector government schools declare allegiance to the Hong Kong Special Administrative Region of the People’s Republic of China has reignited the question of the need or utility of the performative act of promissory oath-taking or making solemn declarations.

There is a strong argument that such oaths and declarations are unnecessary because they depend on the conscience of the individual and add nothing to legal obligations. The 17th-century English political scientist, Thomas Hobbes, said this about oaths in his book Leviathan:

“It also appears that the oath adds nothing to the obligation. For a covenant, if lawful, binds in the sight of God without the oath as much as with it: if unlawful, bindeth not at all, though it be confirmed with an oath.”

The 19th-century English philosopher, Jeremy Bentham, was of the same view as Hobbes. He called oaths “false security for trustworthiness.”

Requiring foreigners to make promissory oaths of allegiance or declarations to the same effect are more problematic than regular oaths or declarations made by citizens. Quite apart from questions of personal conscience, there is the potential for conflicting legal and moral obligations to arise.

In July 1862, the war between the Union and the Confederate States of America was not going well for the Union. It had lost several battles in Virginia in the preceding weeks. Confederate envoys were in France discussing what foreign aid Emperor Napoleon III might provide to the Confederacy. US president Abraham Lincoln was just about to make his Emancipation Proclamation.

At this nervy time, Union commanders were suspicious of foreigners who, they thought, might be sympathetic to the Confederate cause. In the interests of what we would call “national security,” they required resident foreigners to swear allegiance to the USA.

Lincoln was a lawyer first and a politician second. He thought the practice of compelling oaths of allegiance from foreign nationals objectionable. On 21 July, 1862, he required his Adjutant General to issue an executive order stopping the practice.

“Representations have been made to the President by the ministers of various foreign powers in amity with the United States that subjects of such powers have during the present insurrection been obliged or required by military authorities to take an oath of general or qualified allegiance to this Government.”

“It is the duty of all aliens residing in the United States to submit to and obey the laws and respect the authority of the Government. For any proceeding or conduct inconsistent with this obligation and subversive of that authority, they may rightfully be subjected to military restraints when this may be necessary. But they can not be required to take an oath of allegiance to this Government, because it conflicts with the duty they owe to their own sovereigns.”

“All such obligations heretofore taken are therefore remitted and annulled. Military commanders will abstain from imposing similar obligations in future, and will in lieu thereof adopt such other restraints of the character indicated as they shall find necessary, convenient, and effectual for the public safety.”

In this short statement, Abraham Lincoln pithily identified the problem with requiring foreigners to pledge allegiance to foreign powers.

First, since the oath of allegiance incorporates an acknowledgement to be bound by the foreign country’s laws, it only restates the existing duty of the foreigner to “submit to and obey” the laws and respect the authority’ of the USA.

Secondly, since the pledge went further and required the foreign national to commit to the political and ideological beliefs of the host nation, it was unfair because those beliefs might be at variance with duty of allegiance owed to their home country.

Most foreign countries are lenient when their nationals are constrained to declare allegiance to another country if the pledge was through compulsion or, as in the case of NETs, the alternative to not making the declaration was the loss of employment.

A good example is the US case of Baker v Rusk. Morris Louis Baker was born in North Dakota, in the US, in 1905, but went to live in Canada when he was one. He did not naturalise to become a Canadian citizen and, in his 20s, became a barrister and solicitor in Alberta. He practised law in Canada until 1944, when he went back to the US to live there permanently.

The State Department objected to Baker asserting that he was a US citizen. Its lawyers pointed out that when he became a Canadian lawyer, he swore an oath of allegiance to King George V. That act meant that Mr Baker had given up his US citizenship or, in legal parlance, he had expatriated himself.

The US court was sympathetic to Mr Baker. It made a remarkably generous finding that Mr Baker, a lawyer, did not understand the significance of the oath. It found that, in the back of his mind, Mr Baker had always adhered to Uncle Sam even though his acquaintance with him as a babe in arms was fleeting.

It recognised that subjective reservations could inwardly qualify the external show of pledging allegiance or, more simply, that an oath means what the oath-taker thinks it means. It said:

“It seems to me, also, that, even if [Mr Baker] had been vividly cognizant of the words of the oath that he took, he might thereby have intended to acknowledge allegiance and swear loyalty to King George V as the symbolic head of the legal system and institutions to which he was hoping to devote his professional life, without claiming the King as his national sovereign and turning his back on his native land.”

However, the fact remains that international law recognises that a person can lose their nationality through pledging allegiance to another country. It all depends on the facts of the case, such as whether the pledge of allegiance was a preliminary step in acquiring nationality or the oath enabled the oath-taker to assume high office in a foreign government.

Nearly 100 countries have provisions in their laws that allow for the revocation of citizenship on the grounds of ‘disloyalty or treason. Whilst foreign oath-taking on its own will probably not be sufficient to constitute disloyalty, pledging allegiance to a foreign country may be some evidence of disloyalty.

It is unlikely that a hapless NET wishing to secure their job by bearing “allegiance to Hong Kong” will get into trouble when they return to their own country. As Lincoln has demonstrated, it is unnecessary to inflict this minor ordeal of conscience on foreign nationals, as well as being of limited utility.

The last word on oath-taking and making declarations should go to another English politician and lawyer, Thomas Selden. He wrote about the sometimes contradictory oaths office holders had to swear in the mid-17th century when one political faction succeeded another and political orthodoxy required public oath-taking.

“Now oaths are so frequent, they should be taken like pills, swallowed whole; if you chew them, you will find them bitter; if you think what you swear, it will hardly go down.”

Philip Dykes was an Assistant Solicitor General in the Attorney General’s Chambers between 1989 and 1991 with special responsibilities for human rights issues. He joined the private Bar in 1992. He was one of the last barristers to be appointed a Queen’s Counsel in 1997. He was the Chairman of the Hong Kong Bar Association between 2005 and 2007 and, more recently, he held the post between 2018 and 2021.