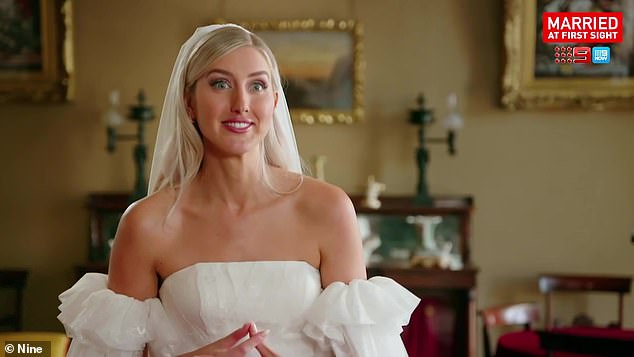 The secret kiss you didn’t see in Married at First Sight: Samantha Moitzi reveals she and Al Perkins locked lips while on their honeymoon

Married At First Sight’s Samantha Moitzi has revealed she shared a secret kiss with Al Perkins while on their honeymoon.

During Sunday’s episode of the dating show, the 27-year-old awkwardly stopped her new husband when he tried to kiss her.

But Samantha told Yahoo Lifestyle the couple shared a kiss while on their honeymoon, but their romantic moment was not shown on TV.

The secret kiss you didn’t see on Married At First Sight: Samantha Moitzi (pictured) revealed she and Al Perkins locked lips during their honeymoon

“I don’t have a problem with how things are portrayed…but I’m a little bummed that some elements were conveniently left out,” she said.

“Like, there was a promo video of us kissing in the river on our honeymoon, and the only thing they showed from the honeymoon was when we didn’t kiss.”

Samantha said the couple were paddleboarding when they ended up kissing.

Secret scene: Samantha said the couple shared a kiss on their honeymoon, but their romantic moment was only shown in a preview and not on TV

Married at First Sight took a major risk pairing the arrogant carpenter who was never in love with the confident fashion brand manager.

And while the couple originally seemed to get along, just minutes after saying ‘yes’, Samantha announced that she was ready to ‘divorce’ her chippie husband.

While walking out of their wedding, Al accidentally stepped on Samantha’s stunning white dress.

It’s strange! During Sunday’s episode of the dating show, the 27-year-old awkwardly shut her new husband down when he tried to kiss her

Samantha was red-faced again minutes later when her husband decided to drop to the floor and do push-ups while posing for their wedding photos in a bid to shake his nerves.

‘Oh my God! Help, she cried, not knowing how to react to his spontaneous behavior.

‘No… I want a divorce!’ she cried before walking away from her fiancé.

“I don’t have a problem with how things are portrayed in the sense that, you know, but I’m a little bummed that some elements were conveniently left out,” she said.