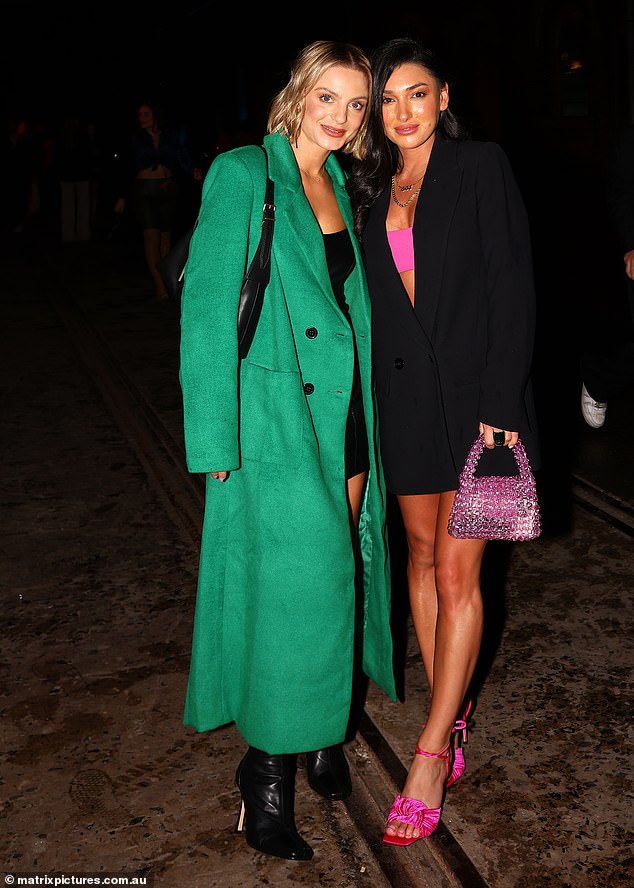 Olivia Frazer was the undisputed villain of this year’s season of Married At First Sight.

But according to TV wives Domenica Calarco and Ella Ding, the award for ‘most unfair editing’ goes not to Olivia, but to Kate Laidlaw.

Nutritionist Kate, 38, has been described as cold, ungrateful and completely indifferent to her ‘husband’ Matt Ridley – but Domenica and Ella insist she is in fact chatty and friendly in real life.

Have their say: Domenica Calarco (left) and Ella Ding (right) of Married At First Sight revealed which bride had the ‘worst editing’ of this year’s season – and it’s not who you are you’re waiting. Dom and Ella are seen here at Australian Fashion Week at Sydney’s Carriageworks on Monday

“Let’s talk about who had a bad edit, a real bad edit, and that was Kate,” Domenica, 29, told Yahoo Lifestyle of the intruding bride.

“Kate is a sweetheart who can actually hold a conversation and can hold meaningful conversations. So let’s talk about it. Let’s support Kate.

Bad girl: Olivia Frazer (pictured at Fashion Week) was the undisputed villain of this year’s MAFS season, but Domenica and Ella feel she didn’t have the ‘worst edit’ overall

Kate, who said in her audition tape that she’s never had a boyfriend or been told “I love you”, was edited to look like a cold fish on MAFS this year.

She didn’t hide the fact that she wasn’t attracted to the lawyer Matt and nothing would convince her to return his affection.

In a memorable moment, Kate seemingly ignored her ‘husband’ as he violently choked on a Tim Tam in their flat and focused all his attention on unpacking his luggage.

Stitched: According to Domenica and Ella, the ‘most unfair edit’ award goes not to Olivia, but rather to Kate Laidlaw (left, with her ‘husband’ Matt Ridley)

Edit: Nutritionist Kate, 38, has been described as cold, ungrateful and completely indifferent to her ‘husband’ Matt Ridley – but Dom and Ella insist she’s actually chatty and friendly in real life

She later insisted on The Kyle and Jackie O Show that she had “no idea” Matt was choking and would have helped him if she had realized the seriousness of the situation.

“I can’t believe any footage was actually shown, to be completely honest,” she said, after radio hosts Kyle Sandilands and Jackie ‘O’ Henderson accused her in joking about wanting Matt “dead”.

Kate then offered two seemingly contradictory excuses for her behavior.

Near-death experience: In a memorable moment, Kate seemingly ignored her ‘husband’ as he choked on a Tim Tam in their flat and instead focused on unpacking his luggage

She first tried to claim that the scenes filmed in the couples’ apartments were “acted out” and not real, before insisting that she just didn’t know it was Matt who was coughing.

“It’s acting scenes, really… no acting… but we do it with cameras on us, and I thought it was a coughing cameraman. So I was in my head thinking, “Just keep going,” Kate said.

‘In fact, looking back at him, I thought, ‘Gosh, Kate. You’re so cold!’ she laughed, before adding, “But no, honestly, if he was choking, I would have jumped to save him.”

What crisis? She later insisted on The Kyle and Jackie O Show she had ‘no idea’ Matt was choking and would have helped him if she had realized the seriousness of the situation.