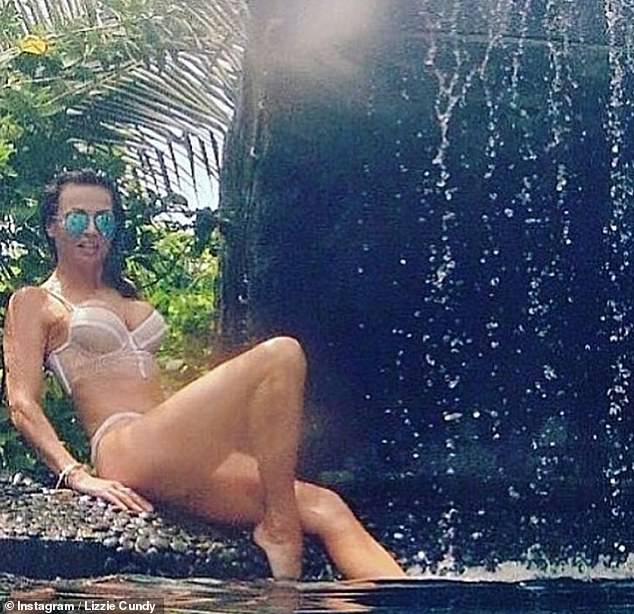 Lizzie Cundy took to Instagram on Wednesday to share a racy snap with her followers as she lay down under a waterfall.

The TV personality, 53, shared the image of her figure in a sexy two-piece and captioned the stunning photo, “Take me back to the beach and in a bikini.”

The image bears a striking resemblance to iconic presenter of the moment Myleene Klass showered in a white bikini, when she was a campmate on I’m A Celebrity Get Me Out Of Here.

Cheeky: Lizzie Cundy took to Instagram on Wednesday to share a racy snap with her followers as she lay under a waterfall

Lizzie wrote the caption: “Keep your memories alive because life changes so quickly. Happy days in a bikini in Barbados, I’m usually there this time of year, missing Barbs and all my friends there.

Fans have flocked to her page to leave comments on the sexy pic. with one fan posting “absolutely gorgeous” followed by two love heart emojis.

Sizzling: The image strikingly resembles the iconic moment Myleene Klass took a shower in a white bikini, when she was a campmate on I’m A Celebrity Get Me Out Of Here

Another wrote: “Wise words indeed” with a thumbs up emoji, continuing with “I miss my many lovely friends in Crete and hope to travel to see them soon”.

A friend added “absolutely stunning” followed by two love heart emoji and the third commented “gorgeous” and the fire emoji and a series of clapping hands.

The sexy comeback image comes as she recently made headlines after her fiery appearance on the Jeremy Vine show earlier this month.

Fun: Lizzie shared a reflection admitting that she yearns for a trip to Barbados

Where she angrily called for the resignation of Prime Minister Boris Johnson.

She said of the alleged party that happened last year during the Covid restrictions: “He can’t recover, I’m appalled.”

She then described how she spent Christmas alone last year and was not happy with the supposed party.

The influencer also turned heads when she posted another scantily clad image of herself that showed off her jaw-dropping figure as she posed in a white lace two-piece with floral detail.

Flaunting her sunny glow, the TV star let her honey blonde locks fall off her shoulders.

Fixing the camera with a sultry gaze, Lizzie looked amazing as she posed in front of a window.

Along with the snap she wrote: “St Nickerless is definitely coming !! Lace underwear! Love an early Christmas present [sic]. ‘

The brunette beauty split from former footballer Jason Cundy in 2010 after 16 years of marriage after meeting mezzo-soprano opera singer Hannah Pedley. The couple are now married and share a son.

Jason and Lizzie married in 1994 and their first son, Josh, was born two years later.

Finished: The brunette beauty split from former footballer Jason Cundy in 2010 after 16 years of marriage (pictured in 2007)