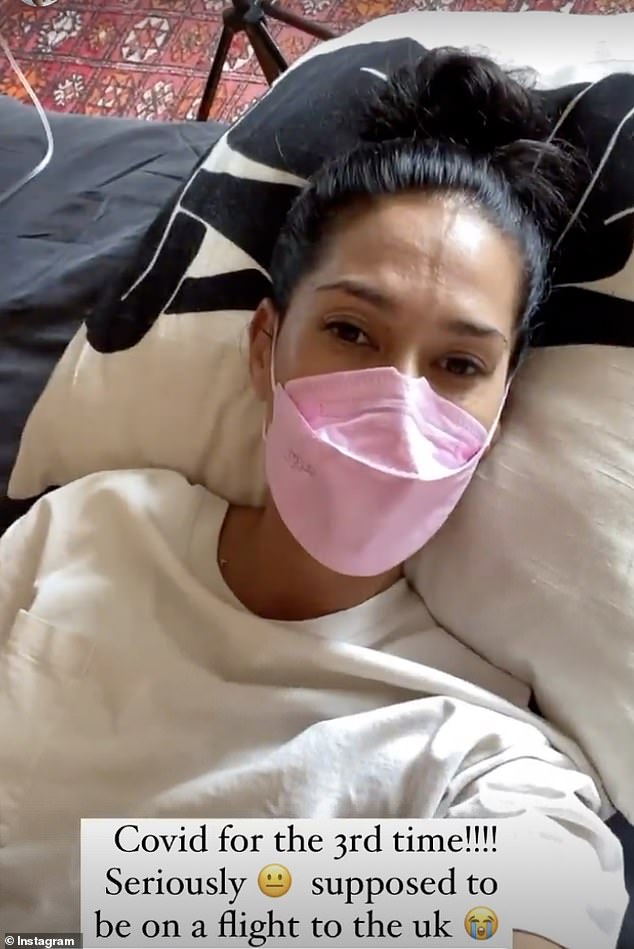 Lindy Rama-Ellis (née Klim) has revealed she has contracted Covid-19 for the third time.

The Balinese beauty – who is the ex-wife of Australian swimmer Michael Klim revealed she tested positive for the virus on Saturday.

Lindy shared a video on Instagram of herself and husband Adam Ellis strapped to IV drops and said: ‘They say third time is a charm but not when it’s Covid’.

Positive: Lindy Klim (pictured) revealed she had contracted Covid-19 for the third time

She explained that she was supposed to travel from her home in Bali to the UK, but had to cancel her plans due to the diagnosis.

She then posted images of Adam drinking a “traditional remedy” which she says helps with recovery.

‘One of our lovely friends from Indonesia sent us this lovely arak but there are red ants inside too. And apparently it’s supposed to work,” she said.

Bizarre: She revealed she had tested positive for the virus and posted images of her husband Adam Ellis (pictured) drinking a ‘traditional remedy’

Arak is a traditional alcoholic drink obtained from the extraction of anise seeds in grape brandy.

There is no scientific evidence that Arak or crushed ants can help a person recover from Covid-19.

Lindy currently resides in Bali but shares custody of her three children with her ex-husband, former Olympic swimmer Michael Klim, who lives in Australia.

“Apparently it’s supposed to work”: Lindy’s drink contained arrack – an alcoholic drink made by extracting anise seeds in grape brandy – and crushed red ants. There is no scientific evidence that Arak or crushed ants can help a person recover from Covid-19

She is also mother to three-year-old Goldie, whom she shares with her second husband, Adam.

Lindy and Michael’s marriage ended acrimoniously around six years ago, with Lindy describing the split as “painful” and “traumatic”.

The couple have since made amends for the sake of their children.

She recently told fans in her Q&A: “Yeah, especially [on good terms with Michael]. Like any relationship, it’s a work in progress.

On good terms: Lindy currently resides in Bali but shares custody of her three children with her ex-husband, former Olympic swimmer Michael Klim, who lives in Australia. Lindy is pictured with her children, husband Adam, ex-husband Michael and Michael’s new girlfriend Michelle Owen