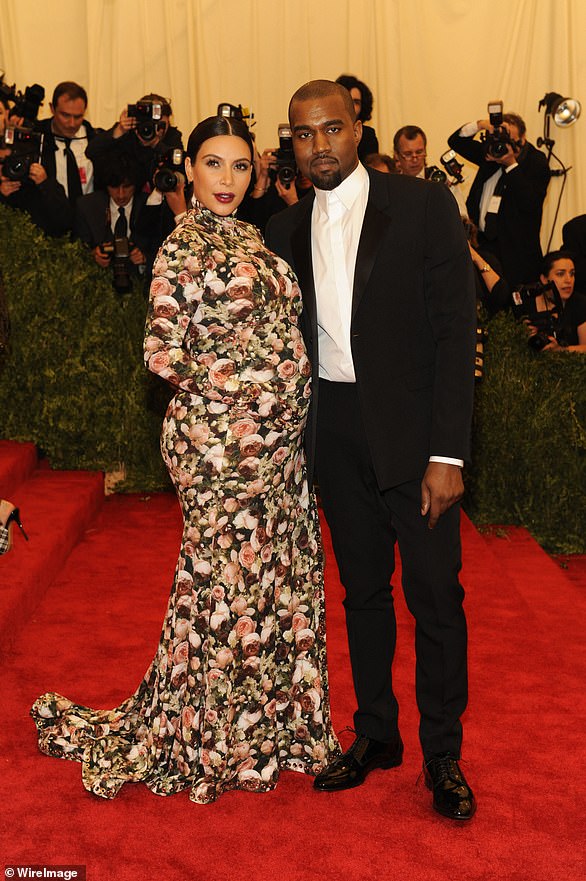 Kim Kardashian has made some pretty dramatic statements at the annual Met Gala in New York over the years.

During her first year at the splashy, star-studded event, she wore a tight floral dress that made the most of her heavily pregnant belly. Later, she would be seen wearing a dress with golden columns, a silver costume that made her look like a robot, a marvel of transparent lace and a dress so tight that she had to wear a corset during weeks in advance.

Last year, the 41-year-old star covered her face with a black cloth in a shocking move as she shared that she had a face full of makeup underneath for some reason.

Here’s a look back at the eight looks the Kardashian star tried on on fashion’s biggest night.

Her first time at the Met Gala was for PUNK: Chaos to Couture in 2013. She was pregnant with North and wore a floral print dress by Givenchy.

The California native said she wasn’t invited but instead was West’s plus one. Unfortunately, after the gala, she “cried” because she was so unsure of everything, she said.

‘2013 Riccardo Tisci for Givenchy. I was Kanye’s plus one and so nervous! I didn’t know anyone and I’m sure no one wanted me lol. I made my own lipstick and the color is so off. I came home and cried after the insecurity, but it’s one of my favorite looks now,’ the TV vet said.

In 2014, Kim wore a blue bustier Lanvin outfit that Kanye had on black. The theme was Charles James: Beyond Fashion.

She said it was the first time she was invited alone.

“My dress was originally made out of this amazing leather with metallic detailing,” Kim said earlier. “But we decided at the last minute to redo it in blue satin.”

She wore a very transparent and sexy lace and mesh dress by Roberto Cavalli for the May 2015 event. Her hair was slicked back and she modeled huge hoop earrings.

And the star posed with husband Kanye West who went with a black suit and boots.

The theme was Celebrating China: Through the Looking Glass.

Kardashian tried the silver at Manus x Machina: Fashion In An Age Of Technology in 2016.

She wore Balmain, a shimmering silver dress that looked like a futuristic dress with a side slit. Husband Kanye West was in the same designer.

She said: ‘2016 Olivier Rousteing for Balmain. I was back insecure this year because I hadn’t lost all my baby weight. Big mistake bleaching the eyebrows but Kanye looked so good this year with those blue eyes! It was super controversial that he wore denim.

Earlier, she noted, “I thought Balmain was the perfect fit for me and Kanye, in particular.” I think Kanye’s look is a bit more understated with the denim mixed in with all the Balmain bling.

This one in 2017 celebrated the opening of Rei Kawakubo/Comme des Garcons: Art of the In-Between.

The selfish author had on a white Vivienne Westwood off the shoulder dress without jewels and strappy heels.

During the bus ride to the event, she had to get up so the dress wouldn’t wrinkle and she said she was already sweating and had to go to the bathroom because she was so nervous.

Kris Jenner’s daughter said: ‘2017 Vivienne Westwood. It was my first year solo. I was so nervous going there on my own that I almost threw up on the way and had to pee every second. I was FaceTiming my sisters to meet at the top of the stairs. Vivienne made me this beautiful dress from her archives.’

She said this gold mesh Versace her dress fits her like a “glove”.

Kardashian added: ‘I knew exactly what I wanted and was the most confident this year. 90’s, chainmail, sexy and simple.’

Kardashian was in a wet look for Camp: Notes on Fashion in 2019.

She had to wear a corset to keep her abdomen as small as possible to pull off this Thierry Mugler dress.

The look was supposed to be “wet”, which is why she had crystals that looked like raindrops coming out of her. Her hair also looked wet because she had oily skin.

Kim shocked fans when she wore a head-to-toe black look that covered her famous face.

Later, the red carpet luminary said she was fully made up under that face sock, which seemed like a lot of effort without reward.

Turns out that wasn’t his favorite move.

“I fought against that. I was like, I don’t know how I could wear the mask. Why would I want to cover my face? she told Vogue this year.

‘But Damna [Gvasalia, Balenciaga’s creative director] and the crew was like, “It’s a costume gala. It’s not a Vanity Fair party where everyone looks good. There’s a theme and you have to wear the mask. It’s the look.” ‘