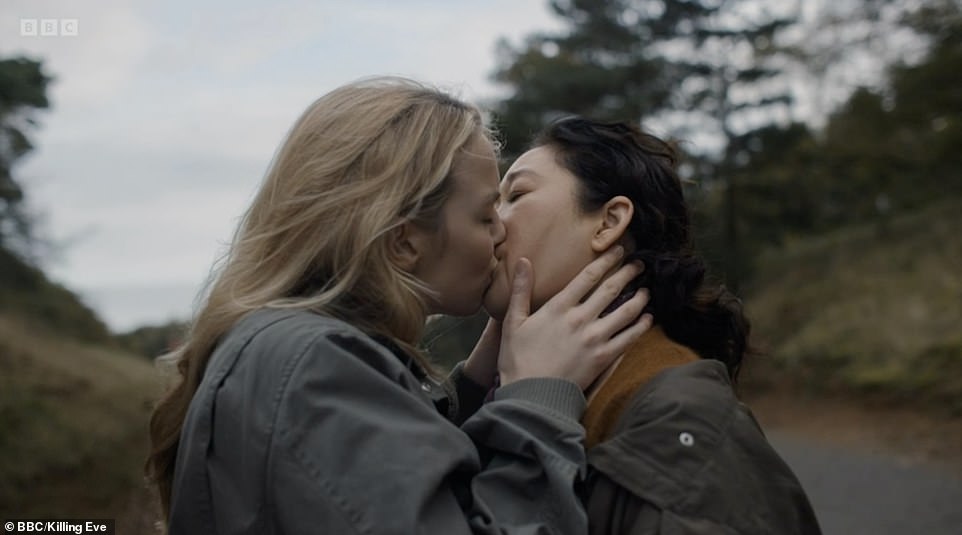 After four seasons, a love affair they don’t want, and a seemingly endless body count, the latest episode of Killing Eve ended with less sparkle and more splash on Sunday night.

Viewers of the popular TSWT show saw Villanelle, Jodie Comer’s enigmatic Russian slayer, meet a watery end after finally overthrowing the Twelve – a group of deadly international assassins of which she was once a part.

As the couple are finally ready to embark on a new life together, the eerily likeable Villanelle is shot dead by a gunman in hiding, her body crashing into the River Thames moments after it appears she is ready for a life of happy freedom with former MI5 agent Eve. Polastri, played by American star Sandra Oh.

Everywhere: After four seasons, a love affair they don’t want and a seemingly endless body count, the latest episode of Killing Eve ended with less glamor and more splash on Sunday night

But many were left disappointed by its closing scenes after spending the past four years watching their stuttering, unrequited love story slowly unfold – only to see happiness snatched away from them at the last moment.

Expressing their feelings on social media, some called the two-part finale unsatisfying, while others criticized writer Laura Neal for her poor treatment of LGBTQ+ characters.

Taking to Twitter, one raged: “I feel so cheated…like I spent four years watching this show…and this is the conclusion??? I’m so f* * crazy king.

A second added: ‘1 day has passed and I’m still angry, annoyed and heartbroken!!! And a reminder that it’s all thanks to Laura Neal, the dog who didn’t know the series and the characters at all!!!’

Devastating: Viewers of the popular TSWT show saw Villanelle, Jodie Comer’s enigmatic Russian killer, shot dead after finally overthrowing the Twelve – a group of deadly international assassins of which she was once a part

Horror: Sandra Oh’s Eve quickly realized her lover was seriously injured, but it was too late to save his life

Watery end: A dying Villanelle crashed into the Thames after being hit by a bullet in Sunday night’s final

Alone: ​​A desperate Eve dove into the water with the Russian killer, but couldn’t save her from a brutal end

Clearly agreeing, a third compared the ending to the HBO drama Game Of Thrones – the show that sparked an online petition demanding a new ending be filmed – writing: ‘Worst ending to a show since GoT, I said what I said.”

A fourth also took aim at the writer of the final episode, adding: “Killing Eve had such a special place in my heart, the show was unlike any other for me…but the finale was like Laura Neal ripped me off the heart, tore apart and killed Eve painfully and viciously forever… a bit dramatic, yes, but so was what she did.

Others criticized Neal’s decision to kill Villanelle, depriving her and Eve of an opportunity to find happiness after finally venting their feelings for each other.

Close: Eve and Villanelle appeared to be embarking on a new life together, but viewers raged after their short-lived relationship ended in tragedy

“It’s disturbing that 6 years after the issues raised by Lexa’s death, writers on television still don’t realize the problems they cause by killing off a lesbian character for drama and they also seem oblivious to doing something about it. wrong and honestly, it’s shameful,” one wrote, comparing Villanelle’s death to the fate of a popular gay character on US show The 100.

A second added: “I thought we were past this damaging trope of killing gays in TV shows. This finale just proves that show runners and writers don’t care about their characters or their LGBTQIA+ representation. It matters. Do better.’

A third wrote: They planned for Villanelle to die this way early on because someone thought “oooh watery footage is going to give the season a cohesive cinematic feel.” I lost track of which interview, but add it to the writers room list of war crimes.