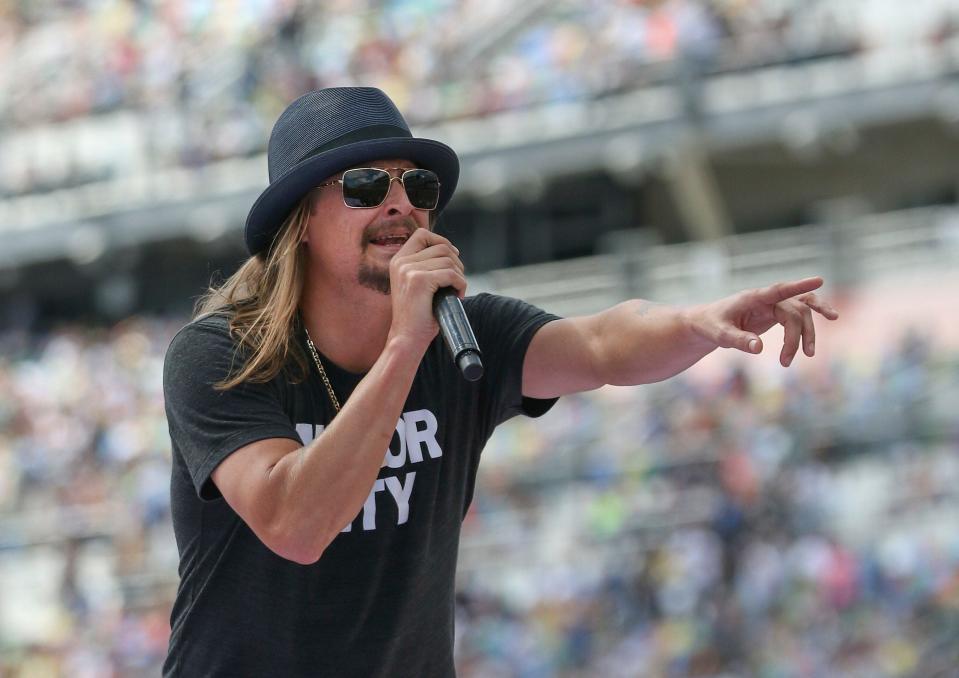 EVANSVILLE, Ind. – Former President Donald Trump made an appearance – of sorts – at the launch of Kid Rock’s latest tour.

Thousands of fans in attendance for Wednesday night’s launch concert at Ford Center were greeted with a video of Trump, one of the rocker’s best-known golf partners.

Trump’s video message has gone viral, with more than 700,000 views since it was posted on TikTok two days ago by a concert attendee.

“Hello everyone, I love you all,” Trump says in the clip, which preceded the show’s first guitar hits. “You’re going to have a great time at the Kid Rock concert tonight. Frankly, he’s amazing. All of you in attendance are the true backbone of our great country: hardworking, God-fearing, rock ‘n’ roll patriots. “

Kid Rock to Tucker Carlson: “You can’t cancel me, I love it when they try”

Trump called Kid Rock “one of the greatest entertainers of our time. Not the greatest golfer, by any means. His golf game could use a little work. But a great, great entertainer, and that is why you are here.

“Let’s all continue to love one another, fight for our God-given freedoms, and above all, rock America again!” concluded the former president.

Wednesday’s concert was the first of Kid Rock’s “Bad Reputation” tour. At the start of the show, he played the politically charged song “We the People,” which fires profane shots at Dr. Anthony Fauci, the Black Lives Matter movement, Facebook, Twitter and the news media, and the expression “Let’s Go Brandon” used to attack President Joe Biden.

‘Trump talks off the cuff, I get what it is, sometimes you get it wrong,’ the star told Carlson, saying he appreciates that Trump isn’t ‘contrived’ or ‘scripted’ like other politicians . “I stood next to him in the White House with the notes prepared and watched him read like a sentence, and then it’s like, ‘Let’s go.’ You’re like, that’s awesome.”

From ‘Bawitdaba’ to ‘Allons Brandon’: Kid Rock’s History of Political Hits and Controversies

This article originally appeared on USA TODAY: Kid Rock concert opens with Trump’s video message: ‘I love you all’