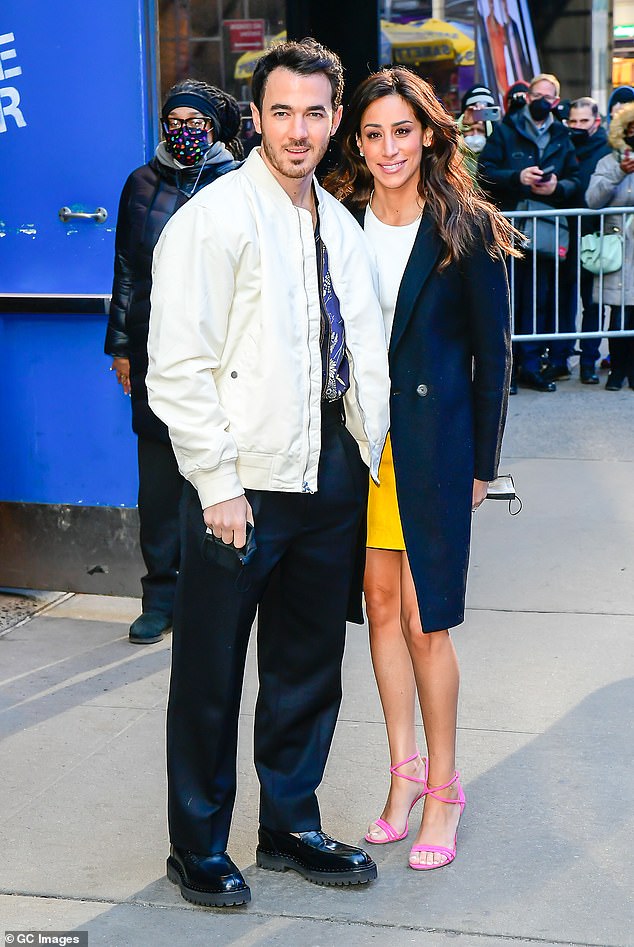 He is one-third of the Grammy-winning pop group Jonas Brothers.

But for his latest adventure, Kevin Jonas has teamed up with his wife Danielle Jonas to write a children’s book about the joys of making music, the power of family unity and facing fears.

And on Tuesday, to coincide with the release of There’s a Rock Concert in My Room, the pair embarked on a promotional spree that included stops at Good Morning America and The View.

Writing duo: Kevin Jones, 34, and his wife Danielle Jonas, 35, kicked off promotion for the release of their first children’s book – There’s a Rock Concert in My Room; the couple are seen outside the Good Morning America studio on Tuesday, March 29

Kevin and Danielle were seen before and after their spot on GMA, with the multi-instrumentalist looking dapper in black pants and a white jacket over a blue patterned shirt and black boots.

His wife looked stylish in a yellow skirt and white blouse paired with pink heels.

The book’s storyline, illustrated by Courtney Dawson, is based on a real-life event in the Jonas’ lives, involving their two daughters, Alena and Valentina, who are now nine and six years old, respectively.

“Working together is great because, you know, working with your best friend is always wonderful,” Kevin told the GMA hosts.

Outside the GMA studio, Danielle looked stylish in a yellow skirt, white blouse and pink heels, while her hubby looked dapper in black pants and a white jacket over a blue patterned shirt and slippers. black boots.

Inspiration: The Jonas Brothers star revealed that the idea for the book came about after their two young daughters practiced for a dance recital and became nervous and started to practice too much which left them unable to enjoy.

The idea came about after their daughters were training for a dance recital and got nervous and started over-training which kept them from having fun.

“So we just turned on the music and started dancing and having a good time, and kind of used that as inspiration for the story,” he added.

When asked if they would like to do another book after working so closely on this one, they both agreed.

“Oh sure,” the musician said as his wife nodded, adding, “We’re really excited about this book and I can’t believe it’s out today. It’s so awesome to feel that way, but I’d like to continue the stories of these people, this big family that we have in this book that we’ve done. There’s a lot of stories to tell, that’s for sure.

New music: The couple also made an appearance on The View on Tuesday morning, which included Kevin explaining how the Jonas Brothers band will be reuniting in the near future

Wardrobe Change: For their place in The View, Danielle donned a hot pink minidress and black heels; they are pictured outside the studio after

The couple also made an appearance on The View on Tuesday morning, prompting a wardrobe change for Danielle, who slipped into a hot pink mini dress and black heels.

While they were talking a little more about their children’s book, the ladies on the show asked how things were going with the Jonas Brothers band. It turns out that the boys will be reuniting in the near future to make new music.

‘It was great. We are living individual lives right now. We hope to be back in the studio very soon,” the New Jersey native said. “We have shows in Vegas in June which will be really great. We love to play, we love to be out there. The fact that we’re making music together again after so many years is great.

The group enjoyed huge success during its first broadcast from 2005 which continued until 2013.

After a six-year split to pursue other projects, Kevin, Nick and Joe would reunite the band and release the Billboard Hot 100 chart-topping song Sucker on March 1, 2019. This led to the release of their fifth studio album – Happiness Begins. – in June 2019, which would also reach No. 1 on the US Billboard 200 chart.

Promo mode: The couple stopped for a photo on the set of The View

Promo trail: Kevin and Danielle also shared a quick video on their respective Instagram pages which they shot in The View’s studio

Promotional blitz: The proud mother of two also snuggled up with her husband on the set of GMA

Big Messages: Kevin and Danielle’s children’s book, illustrated by Courtney Dawson, talks about the joys of making music, the power of family unity and facing fears