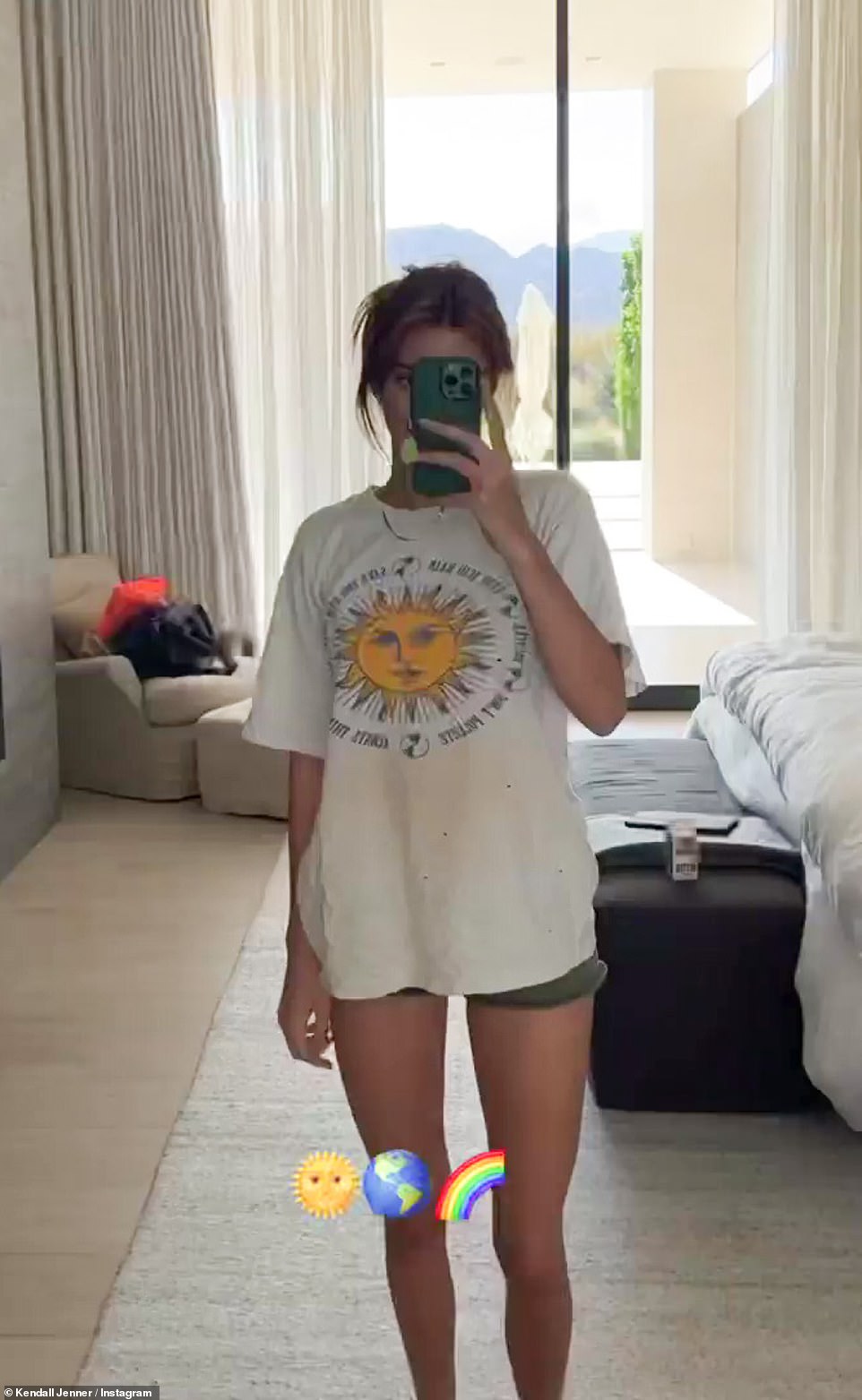 Held annually on April 22, the festivities now consist of a wide range of events globally coordinated by EarthDay.org (formerly Earth Day Network), which would include 1 billion people in more than 193 countries.

The growing movement to shine a light on a range of environmental issues has attracted people from all over the world, including celebrities to use their platforms for the betterment of planet Earth.

Kendall Jenner, Hailey Bieber and Selena Gomez are among many celebrities who took to social media on Friday in recognition of Earth Day.

With the official Earth Day theme titled “Investing in Our Planet” for 2022, Jenner gave a nod to Mother Earth by posting a video of herself wearing a white t-shirt with a sun that has a face on the front.

Surrounding the sun are a number of quotes, including: “Save the Rainforest”; “Stop Acid Rain” and “Don’t Pollute”.

The supermodel, 26, appeared to be in the bedroom of her Los Angeles home, dressed in nothing but this t-shirt and skimpy shorts, and her long dark tresses pulled back into a loose bun.

Along with the short clip, Jenner also shared sun, earth, and rainbow emojis.

Subtle statement: Jenner, 26, appeared to be in the bedroom of her posh Los Angeles home as she honored Earth Day in her skimpy t-shirt and shorts combo

Making a statement: The supermodel’s shirt featured several quotes around the sun, including ‘Save the rainforest’

She also made a point of revealing that the production of her new brand 818 Tequila is environmentally friendly.

“Earth Day: A Shared Earth,” reads the top of a promotional photo showing an arm holding a bottle of 818 Tequila.

“We choose our packaging partners based on an ongoing commitment to protecting our planet,” read, in part, the caption below the image.

Glowing: The former Keeping Up With The Kardashians star flashed an infectious smile in the short clip

Eco-friendly: Jenner was keen to share that her 818 Tequila brand packaging is ‘dedicated to protecting our planet’

Bieber (née Hailey Rhode Baldwin), 25, took to her Instagram page to pay tribute to planet Earth with an eight-image series that includes herself and husband Justin Bieber.

“Thank you beautiful planet,” the model wrote in the caption of the post, which begins with a clip of beautiful blue ocean water, apparently taken in an undisclosed tropical location.

In a darker photo, the in-demand model appears to be tilting her cup in a cheering position while standing in front of the vast ocean.

Mother Earth: Bieber, 25, took to her Instagram page to pay tribute to planet Earth with a series of eight images that includes herself and her husband Justin Bieber

Cheers Mother Earth: In a darker photo, the in-demand model appears to be tilting her cup in a cheering position while standing in front of the vast ocean

Revealing: Ms Bieber also made herself the center of attention standing in crystal clear water decked out in a green bikini

Four-legged family: The much-requested model also featured Earth’s water, mountains and sky with a photo of her hugging her beloved dog

Ms Bieber also made herself the center of attention standing in crystal clear water decked out in a green bikini; and another where she hugs her beloved pooch.

There are also random shots of the forest; her husband, the pop star, marveling at tall, massive trees; and a moored kayak with beautiful water and blue skies as a backdrop,

And finally, there is an image of the couple holding hands on a walk in the desert with white clouds in the middle of the blue sky.

Magnificent wonders: Bieber also posted some images of the wonders of nature

El natural: Justin Bieber could be seen in awe of Mother Nature’s creations

Charming: There is more natural beauty on the planet that showcases the water, trees, and sky

Wonders of the desert: The last image of Beiber’s post shows her and her pop star husband holding hands while walking in the desert

With 314 million fans and followers on Instagram, Gomez can easily make an impact when she supports a cause or movement.

For Earth Day 2022, the former Disney star posted a short video of herself, decked out in a colorful floral ensemble, trying to rally her social media followers to try and make a difference in terms of Earth.

‘Happy Earth Day. I reflected on the magnitude of our planet’s healing needs after reading this amazing book called Monarca by Leopoldo Gout,’ the actress and singer began in the clip.

“I think we all need to try to do more, even small efforts in our daily lives can have an impact on improving the planet. I know that’s something I will try to do, and maybe we’re all trying to do a little more.

She ended the post by sharing, “Love you guys.”

Gathering her fans: Selena Gomez spoke directly to her 314 million Instagram fans and followers in a video where she urged people to try to make a difference in terms of the environment

Educate yourself: “I thought about how much care our planet needs after reading this incredible book called Monarca by Leopoldo Gout,” the actress began in the clip

Lindsay Lohan kept it short and sweet in recognition of Earth Day on her Instagram page on Friday.

The 35-year-old actress posted a photo that captured the immense beauty of the planet’s oceans, with the sun as a backdrop and the simple caption, “Happy Earth Day!”

Earth Day is celebrated annually on April 22 as a reminder to protect the environment, restore damaged ecosystems, and lead more sustainable lives.

The Premise: Written by Leopoldo Gout and Eva Aridjis, Monarca tells the story of a “Mexican-American girl who transforms into a monarch butterfly and undertakes the great migration to Mexico, Monarca weaves together the values ​​of heritage, ecology and personal transformation”.

Make a difference: “I think we all need to try to do more, even small efforts in our daily lives can have an impact on improving the planet,” Gomez said, adding, “I know it’s ‘is something that I will try to do, and maybe we all call trying to do a little more’

Dreamed up by Senator Gaylord Nelson and inspired by the protests of the 1960s, Earth Day began as a “national environmental workshop” and was held on April 22 to maximize the number of students who could be reached. on university campuses.

EarthDay.org shared its most recent mission statement at the top of its website: “For Earth Day 2022, we must act (boldly), innovate (widely) and implement (equitably).

He continued: “It will take us all. All-in. Businesses, governments and citizens – everyone is responsible and everyone is accountable. A partnership for the planet.’

Join the movement: Lindsay Lohan was also among the celebrities to honor Earth Day 2022

Here comes the sun: Lohan, 35, kept it short and sweet with a gorgeous shot of the ocean and the sun in the backdrop