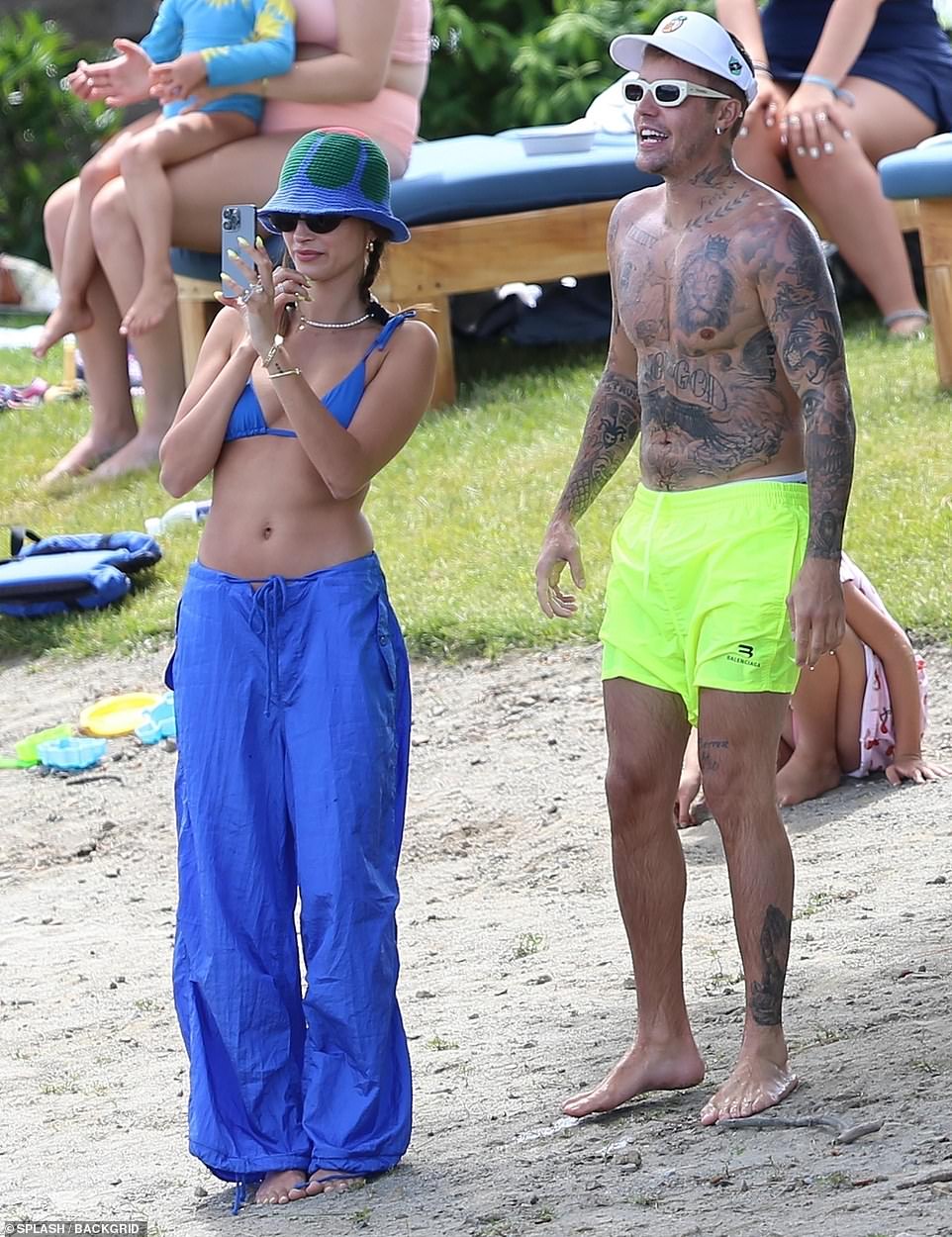 Justin Bieber has been pictured smiling once again after battling temporary facial paralysis from Ramsay Hunt syndrome – which forced him to postpone the US dates of his tour last month.

The 28-year-old Canadian pop star was seen in high spirits while on vacation in Idaho on Tuesday, as he was accompanied by his wife Hailey Bieber, longtime friend and mentor Usher Raymond, and pals Jason Kennedy and his wife Lauren Scruggs.

Justin alarmed fans last month when he explained his diagnosis, which is a complication of shingles that can lead to facial paralysis, in a shocking video where it was apparent that he was unable to move the right side of his face.

However, while enjoying a much-needed break with his wife and friends, it seemed as though the musician is now showing vast improvement as he flashed a grin and appeared animated while chatting amongst the group.

Justin Bieber smiles again after facial paralysis: The 28-year-old singer is enjoying a wet and wild holiday with his bikini-clad wife Hailey after canceling all US tour dates amid battle with a rare Ramsay Hunt syndrome syndrome

The pop star’s vacation comes just weeks after he opened up about his diagnosis on Instagram (left), revealing that he was struggling to eat because of the condition, while asking fans for their ‘prayers’

In his initial video when he broke the news to fans, Justin explained: ‘Hey everyone Justin here, I wanted to update you guys on what’s been going on.’

‘Obviously as you can probably see with my face. I have this syndrome called Ramsay Hunt syndrome and it is from this virus that attacks the nerves in my ear and my facial nerves and has caused my face to have paralysis.’

He then added a worrying update on his Instagram Story writing: ‘Been getting progressively harder to eat which has been extremely frustrating, please pray for me [tearing up emoji]’

‘So there is full paralysis on this side my face. So for those who are frustrated by my cancellations of the next shows, I’m just physically obviously not capable of doing them. This is pretty serious as you can see’ he continued.

In high spirits: The 28-year-old Canadian pop star was seen in high spirits while on vacation with his wife Hailey Bieber, in Idaho on Tuesday

Feeling back on top form: Justin and pal Jason Kennedy climb up an inflatable assault course on holiday

Back in the swing of things: Justin appeared animated as he enjoyed a ride down an inflatable slide

And he’s off! It seems as though the pop star has got his strength back following his health battle

Giving him a reason to smile: Justin certainly appeared to be enjoying himself on his day of fun

According to FacialPalsy.org.uk if antiviral treatment is given within 72 hours of developing symptoms approximately 70 percent of people will experience a virtually full recovery and if damage to the nerve is mild then recovery should take place within a few weeks.

Justin concluded by saying that he is doing all that he can, including resting, in order to address the issue but was honest as he said he doesn’t know how long it will take him to recovery.

He said: ‘I love you guys. Thank you for being patient for me and I am going to get better. I’m doing all of these facial exercises to get my face back to normal and it will go back to normal.

In each other’s arms: Hailey and Justin packed on the PDA during their time off together

Stylish: His wife Hailey wore a cool bikini top and matching blue trousers as she took snaps of her hubby enjoying himself

Kissing him all better: Hailey was not shy when it came to packing on the PDA with her man

Smiles all round: Justin looked happy as his wife took some holiday snaps on her phone

A few weeks later, Hailey, 25, assured fans he was ‘doing really well’ when appearing on Good Morning America, revealing: ‘He is getting better every single day.’

She added: ‘He’s feeling a lot better. Obviously, it was just a very scary and random situation to happen, but he’s going to be totally okay and I’m just grateful that he’s fine.’

While on his day of fun in Idaho, Justin was seen wearing fluorescent yellow shorts while Hailey looked stylish in a blue bikini top and matching trousers.

Proving that he’s back in good health, the Baby singer put on an animated display as he enjoyed a ride down an inflatable slide.

Later he was seen hugging his pal Usher, 43, who is credited with helping make Justin into the household name he is today.

Couple goals: While on his day of fun in Idaho, Justin was seen wearing fluorescent yellow shorts while Hailey looked stylish in a blue bikini top and matching trousers

Smiling again! Justin showed off a grin that signals a vast improvement on his condition

Time with his pals: Justin was seen relaxing with his longtime friend Usher, who is credited with helping discover the pop sensation when he was younger

Counting his friends: Justin gave singer Usher Raymond a big hug as they relaxed together on sun loungers

From the beginning: Usher, 43, is credited with helping make Bieber the household name he is today

Also pictured on the fun day out was Jason Kennedy and his wife Lauren.

Earlier this week, Justin and Hailey were seen posing with Jason’s newborn son Ryver Rhodes, who they lovingly referred to as their ‘nephew.’

In late April, Justin shared a photo snugging with Ryver with a sweet caption vowing to protect the baby ‘for life.’

During an interview with Access Hollywood in May, Justin gushed he has always had ‘a love for kids.’

Sad news: Justin revealed last month in a shocking video he has was suffering from facial paralysis from Ramsay Hunt syndrome just days after cancelling dates on his Justice World Tour

WHAT IS RAMSAY HUNT SYNDROME? THE RARE COMPLICATION OF SHINGLES THAT LEADS TO FACIAL PARALYSIS

Ramsay Hunt syndrome is a complication of shingles, caused by the same virus as chickenpox (VZV), that can lead to facial paralysis.

The virus becomes reactivated after laying dormant for years and causes inflammation and irritation on the facial nerves.

VZV is harmless unless it is reactivated and should this happen new symptoms will appear.

The virus can be reactivated when the immune system is weakened, and less able to fight off infection. Stress is often a trigger.

Figures suggest that five in every 100,000 adults in the US will develop RHS. It poses a similar threat in the UK, according to the NHS.

Children are rarely affected by RHS, as the complication most often affects adults in their 60s.

What are the symptoms?

Earlier this year, Hailey spoke about her eventual plans to expand her family while telling WSJ Magazine: ‘I think ideally in the next couple of years we would try. But there’s a reason they call it try, right?’

‘You don’t know how long that process is every going to take. Definitely no kids this year, that would be a little hectic, I think,’ Hailey added.

‘There’s this thing that happens for women when you get married. Everybody assumes it’s: ‘First comes love, then comes marriage, then comes the baby,’ she explained.

Strong: The star showed off his muscled physique while atop of an inflatable slide

In crowd: The famous couple were joined by friends Jason Kennedy and his wife Lauren Scruggs (both pictured above)

Group fun: Hailey appeared to be enjoying herself as she documented the day out on her phone

Leaning on each other: Hailey has been giving fans an update on Justin’s condition throughout the past month

Busy time: His wife has also been preoccupied with launching her own skincare line called Rhode, but now appears to be taking some time off

Justin and Hailey met in 2009 after her dad Stephen Baldwin introduced them; They became friends and dated for a short time in early 2016 before they parted ways.

He went on to date Sofia Richie and briefly reunited with ex girlfriend Selena Gomez.

Cheese! Justin takes a snap of Jason’s newborn son Ryver Rhodes, who they lovingly referred to as their ‘nephew’

Feeling broody? Justin and Hailey seemed enthralled with the little one on their day out

Feeling better: Justin appeared to be tucking into a plate of fries

Feeling fresh: The singer put on an animated display as he went for a dip

Improvement: Earlier this month Justin struggled to fully move his face due to the condition

The lovebirds got their marriage license from a New York City courthouse in September 2018.

They tied the knot in an extravagant wedding in South Carolina on September 30, 2019 at the Montage Palmetto Bluff resort in front of 154 guests that included Kendall and Kylie Jenner.

Hailey said about married life with Justin: ‘Behind closed doors, we’re two really normal people that just have not-normal lifestyles and careers. I think given the magnitude of Justin’s career, he’s a very normal person, and I don’t think that always happens.’

After their brief split in 2016, Hailey said she felt like an outcast at her church she attended at the time: ‘There were a lot of people in the church world that made me feel very outcast. When did church become a social club? That was such a bad feeling.’

Cuddles: Justin and Hailey seem more in love than ever