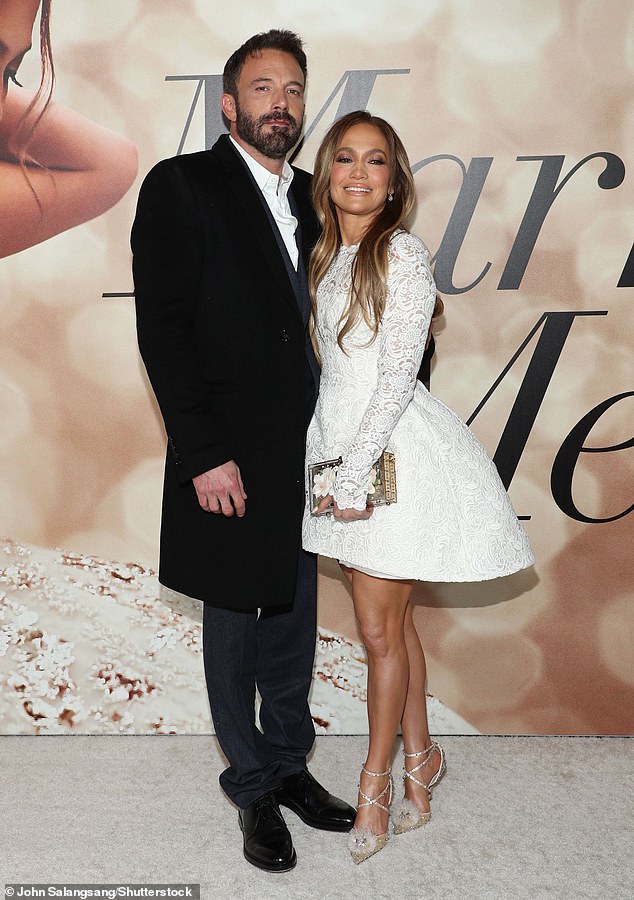 Jennifer Lopez and Ben Affleck are “not talking” about getting married at this time.

The 52-year-old star announced the couple were engaged in a clip posted to her website, but a source close to her says a wedding is not yet planned.

An insider told PEOPLE that JLo “loves her ring” and “can’t stop staring at it,” but adds that Jennifer and Ben are “not talking about marriage” yet.

Take it one day at a time! Jennifer Lopez and Ben Affleck ‘not talking’ about getting married yet; photographed in February 2022

The source said: “It’s so cute how excited she is. Ben makes her incredibly happy.

The insider also revealed that the couple wanted to keep their engagement “quiet for a few days” before going public with the news.

Jennifer and Ben rekindled their romance last year after dating from 2002 to 2004.

The duo first got engaged in 2003 but split the following year after postponing their wedding.

She said yes again! JLo showed off her breathtaking lime green ring as she announced her engagement last week

Go back on! Jennifer and Ben rekindled their romance last year after dating from 2002 to 2004

The couple’s rekindled relationship came as a shock to fans; they reunited in May 2021 – 17 years after their failed engagement.

In April 2021, Jennifer confirmed the end of her relationship with Alex Rodriguez, a former New York Yankee after the pair dated for four years and were engaged for two years.

In mid-May, Jennifer spent time in Los Angeles with Ben, sparking rumors that they had in fact reunited.

“Jennifer was only in Los Angeles for a few days,” a source told People. “She’s been spending time with Ben. They’ve stayed in touch every day since their trip to Montana.

Tender and loving care: The couple shared a hug on a walk in the Hamptons last year

The couple went Instagram official with their relationship in July while vacationing in Europe in honor of their 52nd birthday.

The power couple have continued to grow stronger in their relationship since then, attending red carpet events and spending time together across the world.

Jennifer recently suggested things were different this time as they are older and wiser than they were two decades ago.

The On the Floor singer told People: “We’re older now, we’re smarter, we have more experience, we’re at different times in our lives, we have kids now and we have to be very aware of these things.’

The quirky romance between the couple has garnered huge media attention and the nickname “Bennifer,” but JLo thinks they’ll face the spotlight this time around.

She explained: “I think we’re strong enough now to know what’s real and what’s not, whereas when we were younger some of those outside voices were maybe a little bit harder to hear. reconcile and survive.”

Pop culture sensations: Jennifer and Ben rekindled their romance last year after being a couple between 2002 and 2004.