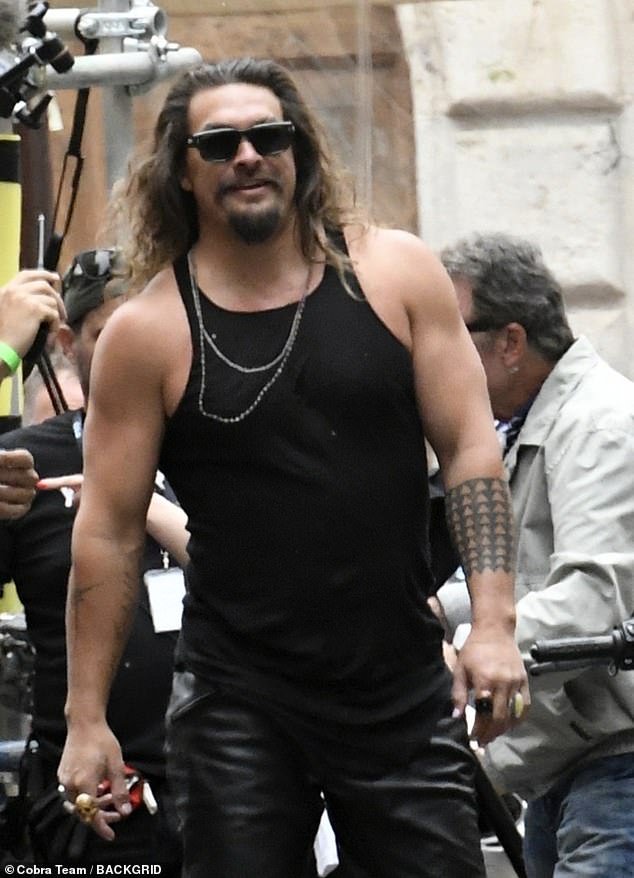 He is shooting in Rome for the next Fast and Furious 10: Fast X.

And Jason Momoa upped the ante on Saturday as he was pictured riding a custom-built Harley Davidson motorcycle, filming for the sequel.

Ripped: Jason Momoa, 42, flaunted his muscular figure on Saturday while filming Fast and Furious 10 in Rome

He paired the look with black boots and silver chains, later adding a snakeskin leather jacket on top.

Jason shielded his eyes with a pair of black sunglasses – as his long locks fell freely behind his shoulders.

The Aquaman star showed off his tattoos during filming, including a geometric family crest ink that covers his forearm.

High speed: He was photographed on a bespoke Harley Davidson motorcycle while filming the sequel

All black: The actor donned skintight leather pants and a black tank top – showing off his bulging muscles

He seemed to make the most of the film’s stunts, riding a red and black Harley Davidson motorbike through the streets of Italy.

The snaps showed a dolly camera following Jason on the motorbike as he speeded along.

Jason recently revealed he’s set to play a villain in the 10th installment of the film franchise.

Hunky: Jason shielded his eyes with a pair of black sunglasses – as his long locks fell freely behind his shoulders

Action: The snaps showed a dolly camera following Jason on the motorbike as he speeded along

Speaking about his role on Entertainment Tonight, Jason said, “It’s fun, I’m playing the bad guy, which I haven’t been able to do in a while.”

‘Now I can be the bad boy. A very flamboyant bad boy. A bit of panache!

Meanwhile, Jason shared his excitement about working with Charlize Theron, confirming her return to the movies as the villainous Cipher.

Scene: He teamed his look with black boots and silver chains, as the production team surrounded him in the Italian city