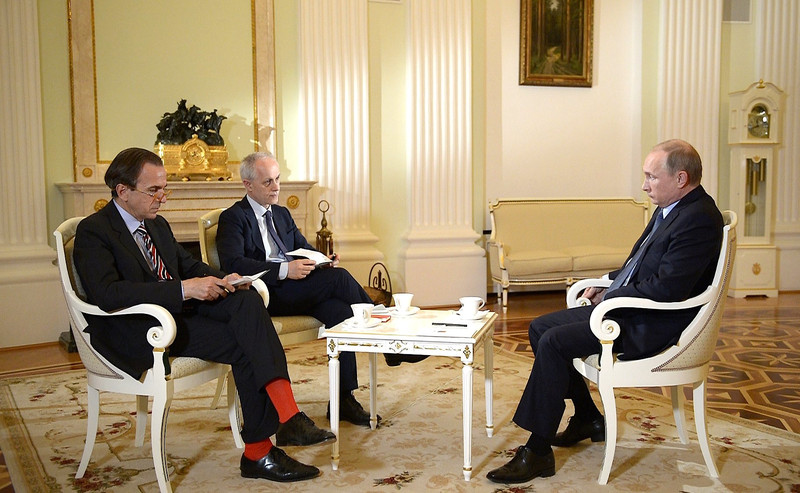 As in most of Europe, talk shows on Italian TV focus heavily on the Ukraine war, but instead of devoting time to politicians and specialists, they rarely invite real experts on the subject.

Instead, they ask celebrity commentators specialising in soccer or Italian politics, philosophers, writers, newspaper editors, and in general, well-known people who know little about the situation in Ukraine and have limited knowledge of Russian history, Ukrainian history, or international relations.

And they always invite at least one guest who is either pro-Russian, or who equally blames Russian president Vladimir Putin and Ukrainian president Volodomyr Zelensky, Moscow and Kyiv, for the conflict.

“In the 1990s, [the Italian scholar] Umberto Eco used the expression ‘infotainment’ to say that television was increasingly making information in the form of entertainment,” says Anna Maria Lorusso, associate professor of semiotics at the University of Bologna.

“Today, information and entertainment are very much overlapping and, in my opinion, this is particularly true in the case of the war in Ukraine.”

Also in the 1990s, historian Nicola Tranfaglia pointed out “the tendency toward ‘television sensationalism’ that favours every opinion that causes a scandal, every thesis that arouses controversy”.

In 2022, the situation does not seem any better: the more that commentators indulge in sensationalism, the more they are invited to talk shows — and the media culture is having an impact on public opinion.

EUobserver spoke to some pensioners outside a supermarket in Padua, a wealthy city in the country’s northeast. When asked who was to blame for the war in Ukraine, two of them answered “Putin” and “Russia”, while a third said “Nato”.

When asked why he thought Nato was responsible, he replied: “The TV says so”.

In Italy, as in many parts of Europe, people are reading fewer and fewer books and newspapers. Many Italians — especially the elderly and blue collar workers — keep informed through talk shows and news broadcasts, which often rerun talkshow highlights.

Social media are also heavily influenced by what is said on talk shows (and influence them in turn).

“Italian TV has become unwatchable. Talk shows keep inviting Russian propagandists, which only causes confusion. Sometimes, they even make things up”, says Yaryna Grusha Possamai, a Ukrainian-born author and a professor of Ukrainian language and literature at the University Statale of Milan.

In one recent, infamous, example, several Italian media reported that Nato secretary general Jens Stoltenberg had opposed Zelensky’s offer of ceding Crimea to Russia — in fact, Zelensky never made such an offer and Stoltenberg had said nothing on the subject.

Another feature of Italian coverage of the war is the long interview, with few interruptions or questions.

A private Italian channel aired one with Russian foreign minister Sergei Lavrov on 1 May which caused outrage, but which appealed to those who already followed the numerous pro-Russian accounts on social media.

This constituency is mostly far right, despises Italian prime minister Mario Draghi, dreams of Italy’s exit from the EU, and frequently quotes talk shows to back their views.

“I think Italian talk shows give so much space to Russian propagandists and pro-Moscow commentators because they are always chasing audience attention, therefore they always try to make a fuss, to stir up a scandal,” said Grusha Possamai.

Fabio Giglietto, an associate professor of Internet studies at the University of Urbino Carlo Bo, agrees.

“Our political talk shows have peculiar characteristics,” he says. “There are so many of them, so there is fierce competition for an audience. But they all use the logic of staging, of the polarised contrast between two factions as an element of sensationalism”.

For Fabio de Nardis, professor of political sociology at the University of Salento, there is a wider “tendency to polarisation in Italy, and not only on the war in Ukraine. The media welcome and encourage such polarisation because it generates debate and attracts an audience.”

Social media also have something to do with it — “because the media need audiences, they build their priorities based on the debates unfolding on social networks, which often are not based on accurate information,” de Nardis says.

Many talk shows often discuss even the risk of a nuclear war with a good dose of hysteria. This frightens viewers, especially the elderly, who have not forgotten the tensions of the Cold War and used to vote for anti-Nato parties such as the communist PCI or the neo-fascist MSI some 40 years ago.

Italy’s economic slowdown, which affects first and foremost blue-collar workers and the unemployed (categories that often vote for populist parties such as the far-right League), also contributes to a growing critical attitude toward Kyiv and Nato.

For example, on 20 May some trade unions called a strike “against war, the war economy” and what they called the “war government”.

And according to a recent poll published in the daily La Stampa, 24.5 percent of the League voters thought sanctions against Russia were dangerous, and 30.4 percent thought they were useless. Almost 73 percent of League voters opposed sending arms to the Ukrainians.

In the same hothouse media culture, more than one in three Italians fears that the world is on the threshold of a third world war and that food, especially pasta and bread, could run out in the coming months because of the conflict — a nightmare prospect for a nation that always fancies a good plate of spaghetti.