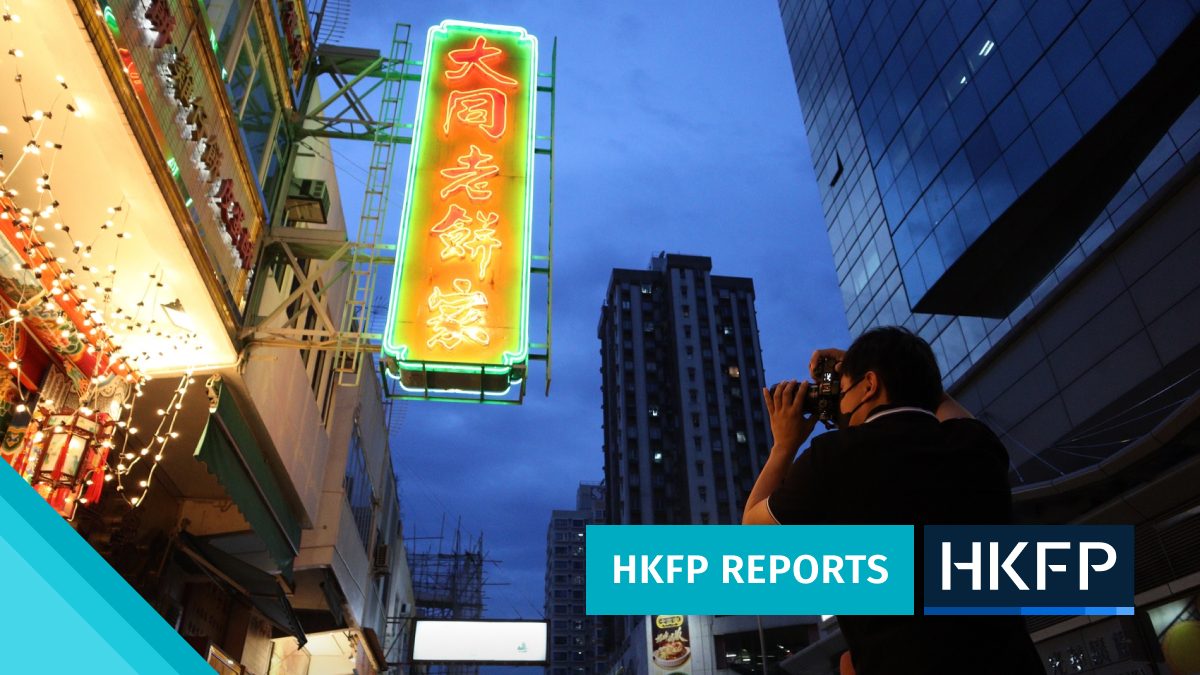 When night falls, a different coloured glow comes from Yuen Long’s Fau Tsoi Street than in the rest of the New Territories town, as the 79-year-old Tai Tung Bakery proudly displays its history in bright red, green and yellow neon lights.

A horizontal sign at the top of the three-storey shophouse that reads “Tai Tung 1943” makes sure every customer knows when the bakery below was established. While a second sign, a vertical guidepost bearing the name of the shop, protrudes from the second floor of the building, catching the eye of every passer-by.

But soon, this iconic pair will have to break up. The decades-old bakery announced on its Instagram account on September 1 that the vertical sign would be removed in one or two months. After glowing for more than half a century, it is now unable to satisfy regulations set out by the Buildings Department.

Under the current rules, signboards erected without prior approval from the department are regarded as unauthorised and should be removed, unless they undergo a safety check every five years to satisfy the voluntary Signboard Validation Scheme.

“I only need one word to express how I feel – pity!” Mr Tse, the 89-year-old owner of the cake shop, told HKFP.

Wearing a long-sleeved white shirt and a dark-coloured mask decorated with gold feathers, Tse was working tirelessly in a small corner of the shop when HKFP visited on Thursday.

Despite his old age, he was still able to handle the long lists of orders and distinguish customer calls from promotional spam.

He said he handed the business over to his son years ago, and would only come in from time to time to have a chat with the neighbours or fill in for his son when necessary.

As the neon sign would soon be gone, Tse said he had taken photographs with his family under it as a memento.

‘A feature of Hong Kong’

With just a couple of days before the Mid-Autumn Festival, Yuen Long’s oldest bakery had a steady stream of customers wanting to buy its renowned mooncakes.

Among them was 70-year-old Ms Cheung, who came prepared with a shopping trolley to collect her box of mooncakes and left in under a minute.

She told HKFP that Tai Tung Bakery products had been a family staple for festive celebrations for around 10 years, and she loved them for their authentic flavours.

Cheung did not know about the upcoming fate of Tai Tung’s iconic neon sign and initially worried about its safety when HKFP informed her it would be removed.

But she said it was a shame it would be taken down. “After all it is a feature of Hong Kong. It is quite beautiful as well,” she added.

Mr Tse and his regulars were hardly the only people who felt nostalgia for Tai Tung’s neon sign.

On Thursday evening, dozens of Hongkongers set up outside the cake shop and raised their cameras to capture the sign’s bright neon glow. Some simply took out their smartphones, while others brought their full photography gear to capture the occasion.

Dickson Cheung was among the earlier arrivals. He positioned himself opposite the bakery with a camera in hand.

The 28-year-old said Tai Tung’s neon sign was “a piece of Yuen Long’s history,” and he wanted to keep a record of it with his photography.

“Since the 1960s and 70s, every shop made their neon signs as big as possible and as pretty as possible to promote themselves,” he said. “But now as the government seeks to regulate everything, Hong Kong is losing its unique features.”

“If the most basic characteristics of Hong Kong are gone, is this even Hong Kong anymore?” he asked.

The amateur photographer told HKFP that he would migrate overseas in a year and he wanted to seize his remaining time in the city to preserve the traces of old Hong Kong.

“So that in the future, when [the features of Hong Kong] only exist in memories, you can still recall them with these photographs,” he said.