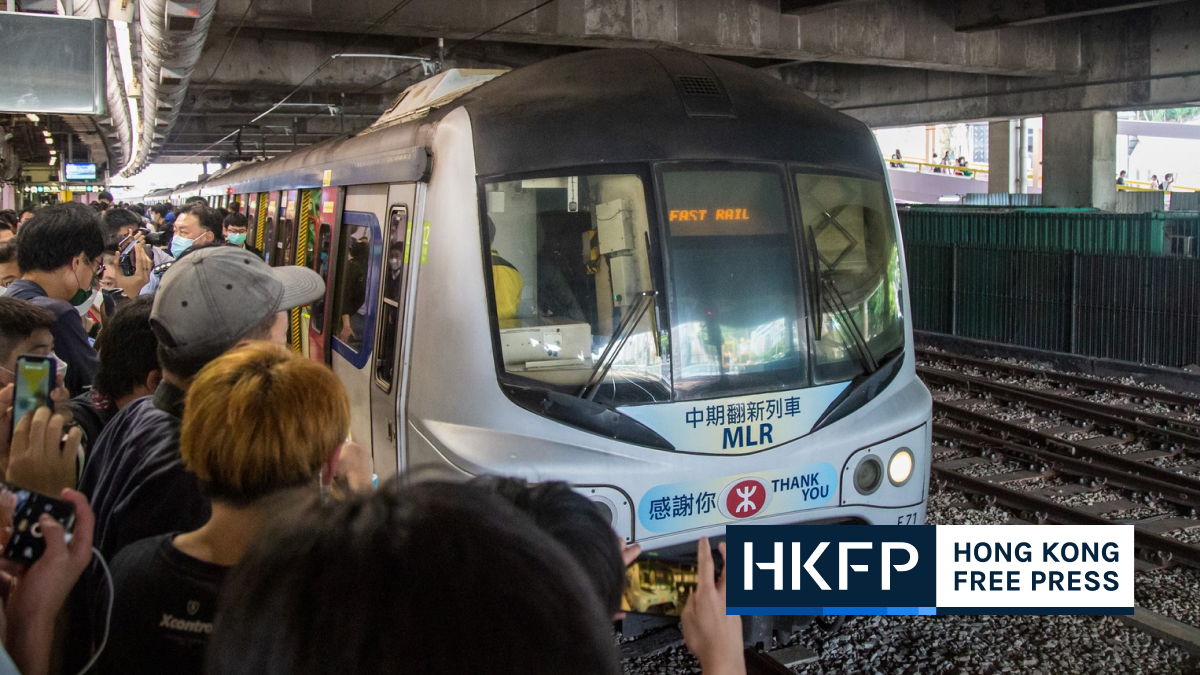 Hundreds of railway fans in Hong Kong bid farewell to the last 12-car electric train on Friday, as the decades-old East Rail Line vehicle was retired ahead of the opening of new stations.

The Hung Hom MTR station was unusually packed on Friday afternoon when train fanatics gathered at the platform to hop on the last ride of a Mid-Life Refurbishment Train (MLR-train). Many brought cameras, placards and other souvenirs to mark the final journey of this cherished train model that has operated in the city since 1997.

The 12 train compartments were crammed, as many people recorded the trip from Hung Hom to Sha Tin, where the train was parked for two hours for rail fans and passengers to admire the iconic “fly headed” vehicle for the last time.

Many people waited in line to take photos with the front and back of the train, which vaguely resembles an insect’s head. Some also whipped out MLR-train replicas, postcards and old leaflets that documented the introduction of the fleet more than two decades ago, when it was still managed by the Kowloon–Canton Railway Corporation.

The train, which ran on the line that stretches from Hong Kong’s border with China to the city’s Kowloon side, was gradually phased out in light of the new cross-harbour Sha Tin to Central Link that will open next Sunday. The farewell ceremony on Friday marked exactly 40 years since the predecessor of the MLR-train – the First Generation Electric Multiple Unit Train – went into service in Hong Kong.

MLR-trains played an “indispensable” role in facilitating the city’s development and connecting people’s lives, MTR Operations Director Tony Lee said on Friday. He led the crowd at Sha Tin station to sing “Happy Birthday” to the retired train fleet and thanked its service over the years.

“The MLR-trains will be retired as the East Rail Line cross-harbour extension passenger service will commence soon. But the successor trains will carry on their dedicated spirit while providing a ‘smarter’ and more extended railway service to Hong Kong Island for passengers,” Lee said. Railway fans clapped and cheered in response.

Aaron Kei, found of rail fan group Train Not Arriving, told HKFP that the MLR-train was a “collective memory” for a lot of Hongkongers, especially those who lived along the East Rail Line. The 28-year-old said he was pleased with the retirement ceremony arrangement, with the MTR Corporation putting up decorations and playing train announcements that briefly introduced the history of the train.

“It was quite thoughtful,” he said.

Mr and Mrs Yip were among those who took a day off from work to join the affectionate send-off. They also brought their four-year-old daughter who became a train fan after watching British cartoon series Thomas & Friends, and gave her a compact camera to take snapshots of the vehicle.

Both Mr and Mrs Yip said they had travelled on MLR-trains since they were children. Years later, the train remained their primary transportation, and they wanted their daughter to have fond memories of the vehicle.

“The retirement of the train is like the end of an era,” Mrs Yip said, while Mr Yip added he was glad that the Covid-19 pandemic had eased over the past few weeks, allowing the farewell ceremony to go ahead.

At 3 p.m., railway fans raised their cameras and phones to film the MLR-train slowly leaving the station. Many chanted “thank you” and applauded until the “fly head” train end vanished from sight.

The MTR said the retired train fleet would be handled “in a sustainable way” under the Legacy Train Revitalisation Programme, which would donate train parts to different community partners for education purposes.