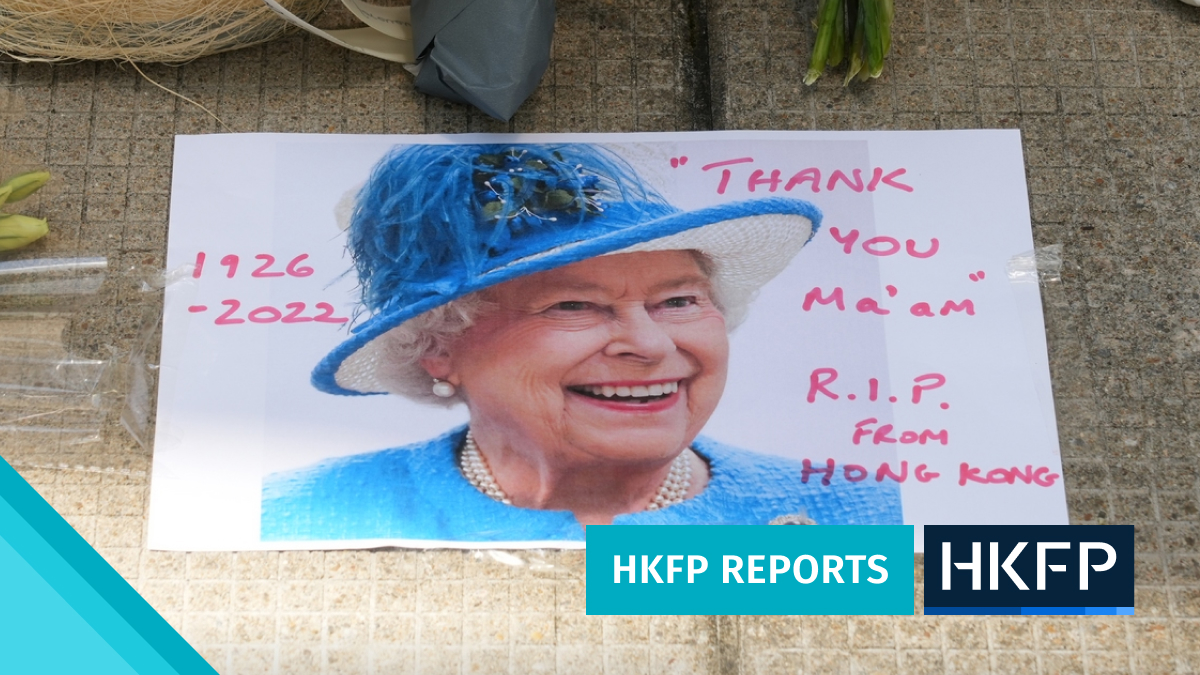 Hong Kong residents have begun to pay tribute to Britain’s longest reigning monarch, Queen Elizabeth II, after waking to the news of her death on Friday.

Buckingham Palace announced her death in the early hours of Friday. The Queen “died peacefully” at Balmoral Castle, a royal residence in Scotland.

On Friday morning, people – some dressed all in black – started to lay flowers outside the British Consulate-General in Hong Kong in Admiralty.

Michael Jones, a Briton who has lived in Hong Kong for over a decade, said he learned of the Queen’s passing when he woke up.

“I think she was a great servant, not only to the UK, but also to the Commonwealth, and globally,” said Jones, who brought a bouquet of flowers and a card to the British consulate.

“These are very difficult times and [I’m] very proud of what she did, she dedicated her life to the UK and the causes,” he said.

Around noon, consulate staff set up a book of condolences at the consular entrance and put up signs to guide those who wished to leave a message to the book. Members of the public can visit the consulate until next Friday. The flag at the consulate flew at half mast.

Hong Kong was under British colonial rule until 1997. During Queen Elizabeth II’s reign, the monarch visited the city twice, in 1975 and then again in 1986, two years after the Sino-British Joint Declaration was signed.

Hongkongers often called the Queen “boss lady,” and many attribute the city’s welfare policies, such as public housing and public schools, to the colonial government.

Mr Fung, who went to the consulate with his wife, said he could still remember the Queen’s coronation, which took place when he was six.

“We were given a lot of presents [during her coronation],” the 76-year-old said.

“[She] helped and loved the people,” Fung told HKFP. “[She] contributed a lot to Hong Kong, through welfare such as housing.”

Mr Chan, who said he was born in the 1990s, said that the Queen “had done a lot for Hong Kong people.”

“I am a British-Hongkonger,” Chan said. “I hope that the successor of the British royal family will inherit the Queen’s humility and friendliness.”

Following a statement from China’s leader Xi Jinping expressing “deep condolences” and “sincere sympathies to the British government and people” to the Queen’s passing, Hong Kong’s John Lee published a short statement on Friday afternoon expressing his “profound sadness” at the monarch’s death.

“On behalf of the people and the Government of the Hong Kong Special Administrative Region, it is with great sadness that I express our profound condolences on the passing of Her Majesty Queen Elizabeth II of the United Kingdom,” the chief executive’s statement read.

“Having reigned for 70 years, she was the longest reigning monarch of the United Kingdom. She was greatly respected, admired and praised by the British people,” the statement continued.

“We send our deepest condolences to the people of the United Kingdom during this time of national mourning and reflection.”