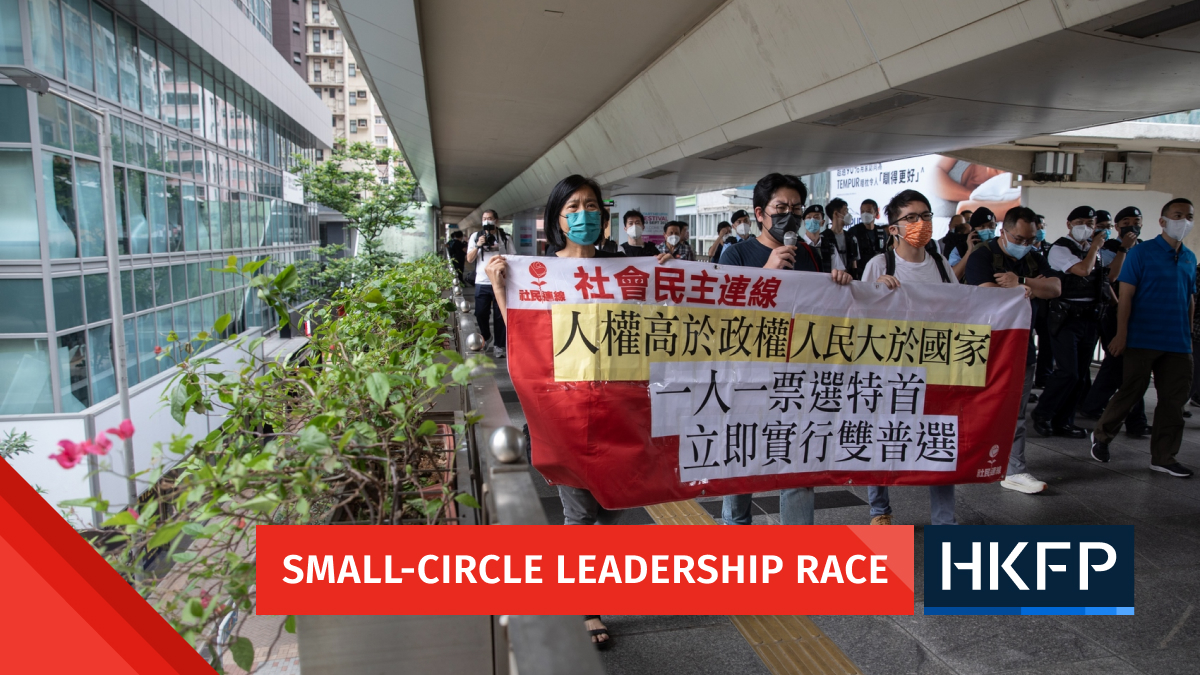 Hong Kong should implement one man, one vote, a local pro-democracy group has said during a brief protest hours before unopposed leadership hopeful John Lee was set to secure the city’s top job.

The League of Social Democrats (LSD) staged a brief demonstration in Wan Chai on Sunday morning. The 64-year-old former chief secretary Lee is expected to secure more than 750 votes from the Election Committee with ease to become the next chief executive of Hong Kong.

Three representatives of the group, including chairwoman Chan Po-ying, walked from the Wan Chai MTR station towards the Hong Kong Convention and Exhibition Centre, where over 1,400 committee members would cast their ballots in the small-circle election.

The LSD said more than 4.47 million voters in Hong Kong were “deprived” of their right to choose the city’s leader, while Lee’s candidacy was described as “perfectly demonstrating the Chinese-style single-candidate election.”

They urged the Hong Kong government to implement universal suffrage, saying the chief executive should be elected by one person, one vote, instead of being selected by the “all-patriots” committee that was vetted by Lee himself back when he was the city’s No.2 official.

Lee had a limited electoral base, the LSD said, adding that the demands and aspirations of most Hongkongers were “completely ignored and oppressed” under the electoral system that was revamped last May to ensure only “patriots” hold power in the city.

“Human rights are above the regime, people are greater than the country,” the LSD’s banner read.

The group also criticised Lee’s election manifesto as “uninspiring,” saying his push for the enactment of the controversial Article 23 of the Basic Law and the “fake news” law would amount to “supressing” the freedom of speech and press freedom in Hong Kong.”

“[R]ed lines are constantly shifting, the legal provisions are ambiguous and everyone is in danger… the presumption of innocence, the right to bail, the jury, sentencing discount after a guilty plea – they all exist in name only under the national security law,” the group said.

Around 20 police officers walked with the LSD, they could only reach Central Plaza as most streets around the voting venue were sealed off.