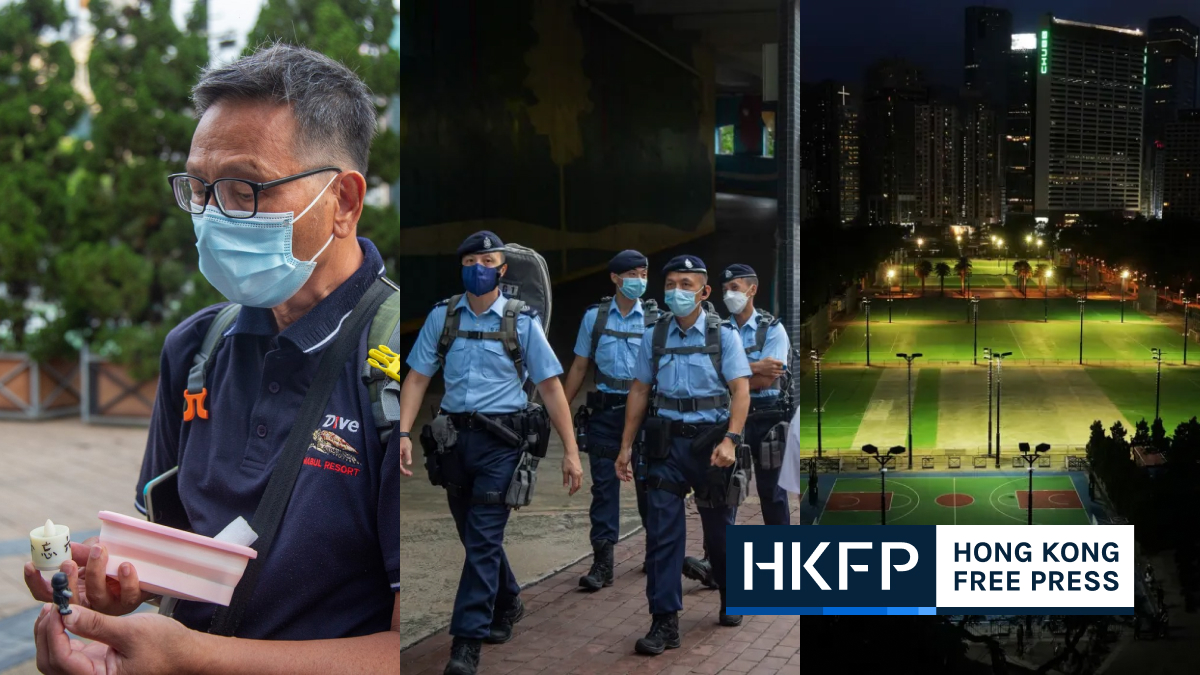 Police carried out a large security operation during the 33rd anniversary of the Tiananmen crackdown that resulted in multiple arrests on Saturday, as individual Hongkongers attempted to stage mini acts of defiance around Victoria Park on Saturday.

On Friday, police cordoned off parts of the park in Causeway Bay, which for some 30 years was the site of annual candlelight vigils to remember those who died during the 1989 crackdown.

This year, commemorative masses have been axed and police have warned Hongkongers that they risk five years in prison if they illegally gather.

In 2020, many Hongkongers defied a ban imposed on Covid grounds and went ahead with the annual candlelight vigil in Victoria Park. A number of prominent veteran activists, such as Lee Cheuk-yan, Albert Ho and Chow Hang-tung – former leaders of the group that organised the vigils – have been jailed for organising or taking part in an unauthorised assembly.

Hundreds, perhaps thousands, died when the People’s Liberation Army cracked down on protesters around Tiananmen Square in Beijing 33 years ago.

On Saturday, officers were seen stopping people wearing black t-shirts with “Hong Kong” on them and masks with a popular protest slogans. Their ID cards were checked in a cordoned-off area.

Mr Chan, 61, brought a plastic electronic candle with the Chinese words “Never forger June 4” to the Victoria Park at around 5 pm. Using the sealed-off football pitches and dozens of police officers as a background, Chan took photos of the candle. He told HKFP that has commemorated the Tiananmen victims in Victoria Park forever three decades aside for a period when he was abroad. “I’m not scared of being arrested. I’m a cancer patient. It would be a trouble for them to take me to the hospital…” Chan said.

He went on to say that the crackdown in 1989 had been criticised by Beijing-backed newspapers Ta Kung Pao and Wen Wei Po at the time, as he asked why his act of mourning would be deemed “illegal.” When asked whether the 2020 and 2021 vigil ban, together with its absence this year, would mean Hongkongers may “forget” about the crackdown, he said: “It has not been that long… I will remember [the crackdown] until I die.”

Shortly after he spoke to the press, around 20 police officers asked Chan to step aside for a stop-and-search. The Force inspected his belongings, including a collapsible food container with the candle and some figurines inside. One of them appeared to be a miniature riot police officer. Chan was released around 10 minutes later, saying police told him that his actions may “incite people to gather.” He left the park on police orders.

Earlier on in Causeway Bay, activist Chiu Yan-loy – previously jailed over the 2020 Tiananmen gathering – brought six white flowers and four red flowers to the scene. Chiu told HKFP he was not attempting to commemorate 1989, but was “attending a lunch date with a friend.”

As he was surrounded by reporters, police stopped and searched Chiu, then escorted him to an MTR station. When asked if he was banned from the area, a Police Public Relations Branch officer said: “We’re not sure either,” and refused to give details. Chiu later told HKFP that police called him a “suspicious person” and claimed his flowers could be “seditious.” Chiu said he is likely to pay tribute privately after being warned to leave: “This is no surprise at all in today’s Hong Kong,” he said.

A man who was wearing a face mask with the Chinese words “Never forget June 4” was led away by the police at Victoria Park where the annual vigil for remembering the victims who died in the 1989 was previously held. Local media later reported that he had been arrested.

Australian Louis McCloud – who wore an electronic candle on his hat – said he wanted to mark the crackdown anniversary and was not concerned about arrest as he was doing nothing wrong.

As night fell, the police presence outside Sogo, which is near Victoria Park, increased. A reminder about Covid social distancing rules banning gatherings of groups of more than four people looped in the background.

A scene of chaos emerged outside Victoria Park at around 7.45 pm, when police officers surrounded League of Social Democrats’ chairwoman Chan Po-ying and vice-chair Yu Wai-pan. Both Chan and Yu wore a white face mask with a black “X” on it. Yu was taken into a police vehicle, but it was unclear whether he was arrested.

Police removed a row of electronic candles from a phone booth in Causeway Bay and ordered dozens of reporters to move citing Covid-19 rules.

Throughout the evening, tensions flared between police, journalists, passers-by and those appearing to mark the Tiananmen anniversary. Police used cordon tape, loudspeakers and warned those gathered to disperse.

Police stopped a man driving a Porsche with a license plate reading US8964 outside Windsor House near Victoria Park. When asked by HKFP, a traffic cop said he did not know why the driver had been stopped. The driver told reporters that he lives nearby and had come to have dinner. A passer-by told him cheerily that his car had a “really nice license plate.”

Some people near Victoria Park turned on the torches on their phones and held them up as they walked along. One woman, who asked to be identified by the initial “V,” told HKFP that she did not wish for history to be erased. She said the act of turning on her phone light was a way of showing that she had not forgotten about the Tiananmen crackdown 33 years ago.

“I hope kids out in Causeway Bay tonight will see the light on our phones and ask their parents or teachers about it,” V, who is in her 20s, said. She admitted that she was “a bit scared” about lighting up her phone, but added that it was “ridiculous” that she was even feeling fear for such a small act. “I came out here deliberately tonight,” V said. “I think it’s our civic responsibility.”

As evening arrived in Mong Kok, groups of police officers patrolled around Nathan Road and Langham Place, where two people were stopped by officers and had their identification documents checked.

See also: Explainer: How Hong Kong sought to erase the memory of the 1989 Tiananmen Massacre

One 80-year-old man was arrested in the Causeway Bay-Wan Chai area on Saturday, police said. It is unclear if the arrest was linked to the crackdown anniversary, but police said he was acting “suspiciously” and refused to cooperate.

Other acts of resistance

During Saturday’s anniversary, the US consulate in Admiralty again displayed commemorative candles in its windows, despite warnings from Beijing.

The European Union office in Hong Kong and Macau also displayed candles in its window.

At least two performance artists were seen in Causeway Bay on the eve of the Tiananmen anniversary. One male artist silently lay on the ground with what appeared to be some plants in his mouth as a woman sat and did mathematics. They were later approached by police.

Earlier in the week, anonymous students at the Chinese University of Hong Kong hid miniature Goddess of Democracy statues – a symbol of the 1989 student movement – around campus. The move prompted an operation by campus security on Friday, whilst some people left white funeral flowers on Saturday at the site where a large democracy goddess statue once stood.

Foreign consulates also paid tribute to the dead on social media earlier on Saturday, defying requests from Beijing to refrain from remarking on the crackdown.

Commemorating the crackdown is often seen as a barometer of free speech in Hong Kong. Amnesty International and other rights groups have planned events and memorials overseas during the weekend.

On Tuesday, Chief Executive Carrie Lam invoked the national security law and Covid-19 restrictions when asked about the legality of Hongkongers commemorating the crackdown.

There are fears that the vigil could formally be made illegal next year under Article 23 – local national security legislation which the city’s next leader, John Lee, has vowed to enact.