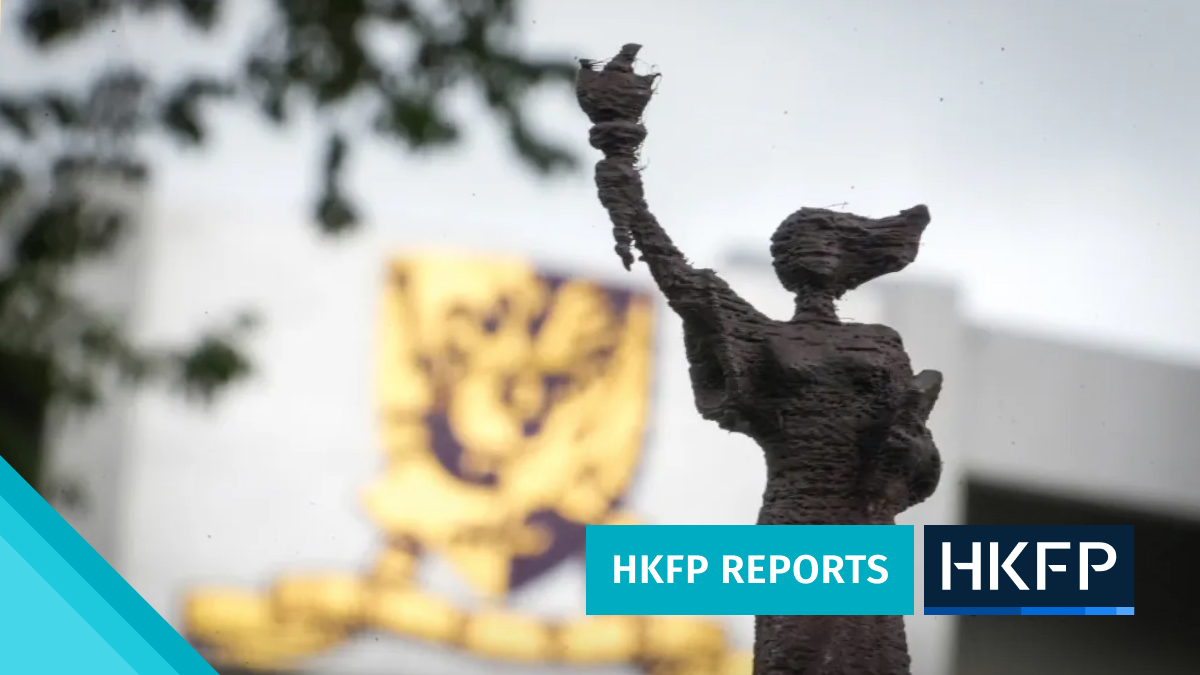 In the run-up to the anniversary of the Tiananmen crackdown, students at a Hong Kong university are searching their campus for small figurines created to mark the event – months after authorities removed a full-size statue commemorating the 1989 bloodshed.

The 3D-printed models of the Goddess of Democracy have been created to keep the memory of the original statue alive as the latter was removed from the Chinese University of Hong Kong (CUHK) campus last December after 11 years.

Ahead of the 33rd anniversary on Saturday, four university students opened an Instagram account called @finding_manneoi – “manneoi” is the Romanisation of the Cantonese for “Goddess of Democracy” – and invited fellow students to search for the miniatures hidden around campus.

“This is kind of a rebellion. The university ‘stole’ the statue from its students, so we’ve decided to make our own versions of it and put it back,” one of the organisers, who asked to be identified as Luna, told HKFP.

The four students have been planning the move since the original sculpture was removed from its spot near the MTR University Station on December 24, 2021.

“To us, the Goddess of Democracy is more than just a political statue, it is also a CUHK landmark. We have emotional attachments and connection to it,” Luna said.

They considered various ideas , such as a gigantic handmade paper-wrapped version of the original. These ideas were abandoned as it would be “too easy to get caught.”

The group settled on 3D printing but soon encountered another difficulty.

“We needed the exact measurements and proportions of the statue. Her waist and chest, the length of her arm, the size of her book…Basically, we need photos that cover 360 degrees of the Goddess,” Luna said.

“However, I personally had never taken any picture with the statue. This idea never crossed my mind – I thought she was going to be there forever.”

They emailed the sculptor who created the statue, Chen Wei-ming, asking for exact measurements. Despite not having the data, Chen thanked them for their dedication.

“I can see this generation’s desire for democracy, and the commitment to social justice – I can see hope for Hong Kong’s democracy in you,” the US-based Chen said in an email to the student organisers, added that he supported their campaign wholeheartedly.

The students eventually managed to collect enough photos of the statue, and built a 3D model. “A lot of people helped us. No one really cared about the cost or workload – everyone just wanted really badly to do this,” Luna told HKFP.

At least nine 10-cm miniatures had been created as of Thursday and three are being hidden in various corners of the campus every day from May 31-June 5. The organisers are posting hints on their instagram account, which has already gathered over a thousand followers.

Brian, an 18-year-old freshman who found one of the tiny Goddesses, said he thought it was a good way to commemorate the Tiananmen crackdown in Beijing.

“I remember I was talking to my friend when we’ve read the news of the Pillar of Shame being torn down by the University of Hong Kong (HKU). I asked my friend, ‘How do you think CUHK students would react if they tore down the Goddess as well?’ It turns out, the university did that only a day afterwards,” Brian recalled.

HKU cited safety issues and legal concerns for the removal of the Pillar of Shame. Officials have also banned the annual Tiananmen vigil in Victoria Park for the past two years, citing Covid concerns, and arrested more than 20 people.

Brian told HKFP he thinks there is little that students or the wider public can do to commemorate the crackdown this year but the miniatures were a way of remembering.

“Congratulations on finding this tiny Goddess of Democracy! Bring her home, and do not forget the meaning behind it!” read a note left by the organisers next to every miniature.