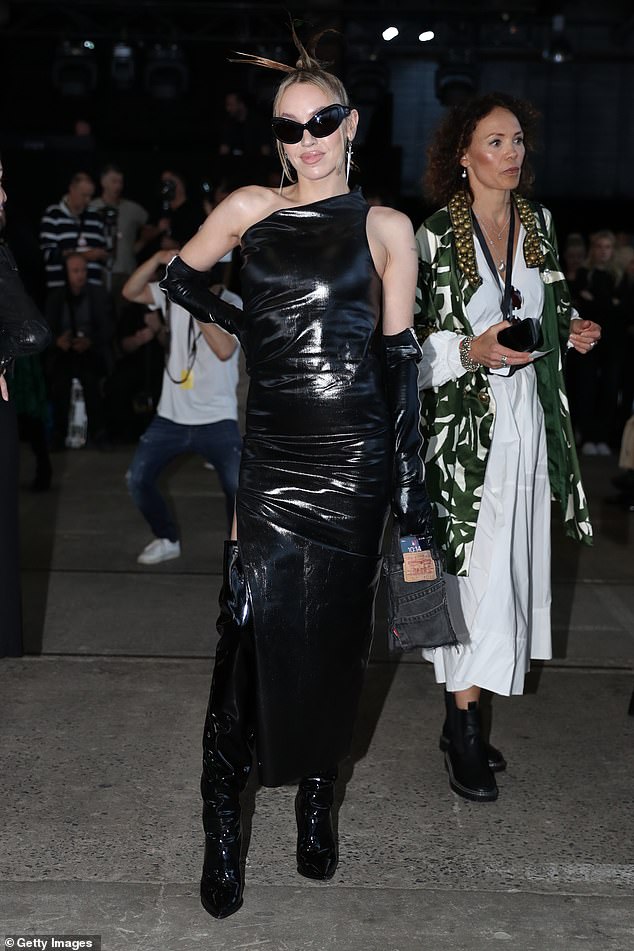 She is well known for her daring looks at Australian Fashion Week.

And Imogen Anthony was back on Wednesday when she attended AFW’s third day in a leather dress, complete with matching gloves and thigh high boots.

Back to black: Imogen Anthony attended day three of Australian Fashion Week in Sydney on Wednesday wearing a leather dress and matching gloves and thigh-high boots

Imogen’s blonde tresses were styled in a spiky half updo and she was accessorized with sword earrings.

She sported the bold look while attending The Innovators TAFE NSW design show at the Carriageworks site in Eveleigh.

It was just the latest head-turning ensemble for Imogen, who previously wore a barely there top with a black corset, ripped jeans and denim boots.

She completed her quirky ensemble with a pair of futuristic wraparound sunglasses and styled her long blonde hair loosely.

Kyle, 50, and his new partner Tegan Kynaston, 36, revealed in February that they were expecting their first child together.

However, the usually outspoken Imogen, who dated Sandilands for eight years before their 2019 split, decided not to comment just yet.

After giving the couple 24 hours to bask in the announcement, she released a classy statement wishing them both well.

“Wishing them nothing but love and happiness,” the socialite wrote on Instagram.

The look: It was just the latest head-turning ensemble for Imogen, who previously wore a barely there top with a black corset, ripped jeans and denim boots