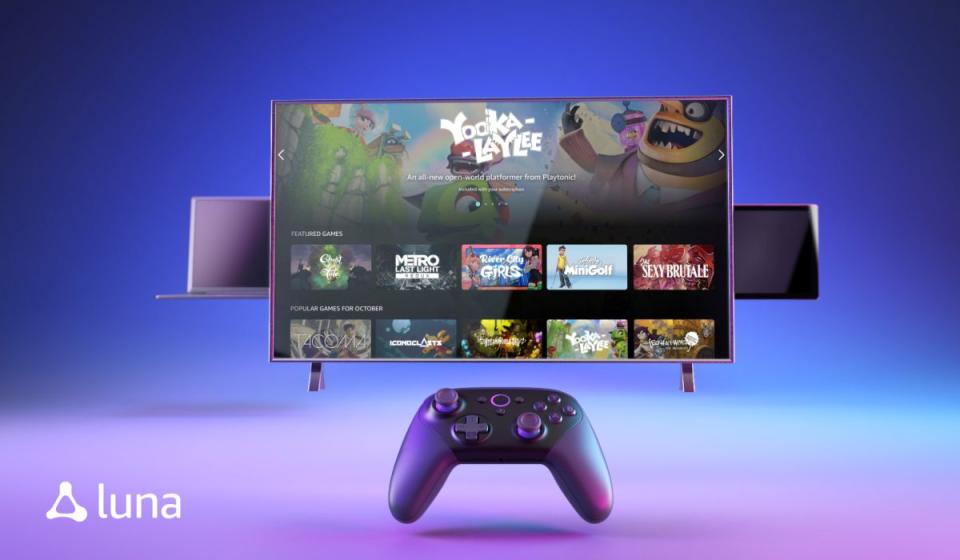 We may receive commission from purchases made via links on this page. Pricing and availability are subject to change.

Remember when we used to buy DVD players so we could watch DVD movies? Then streaming came along and eliminated the need for both.

Now it’s coming for gaming. Believe it or not, a fast internet connection is all you need to play some amazing console games — no console required. That’s awesome for anyone who doesn’t have, say, $500 to drop on the latest PlayStation or Xbox, or just doesn’t want all that gear cluttering up the décor.

Amazon’s new Luna cloud gaming service joins the likes of Microsoft Xbox Game Pass Ultimate, Nvidia GeForce Now and Google Stadia, aiming to bring top-tier games (as well as plenty of classics and family fare) to your PC, mobile device and couch. It’s an exciting prospect to say the least, though there are a few problems with the execution.

The good news is that if you have an Amazon Prime subscription, you can try a handful of games free of charge (though you’re likely to want a game controller; see below). Beyond that, the various Luna subscription-channel options start at a reasonable $5 per month. Here’s everything you need to know about Amazon Luna — and whether it’s going to change gaming forever.

Amazon Luna: What you need to get started

The Luna service streams games to a variety of devices: Windows, Mac and Chromebook PCs; Android and iOS phones and tablets; Amazon Fire tablets; and Fire TVs. Basically, all you need is a screen; Luna serves as the console, but operates entirely behind the scenes. It’s much like Netflix for gaming: You just navigate a list of the available titles, then click “play” to get started.

There is, however, at least one piece of hardware you’ll probably want to add: a game controller. Although many games can be played using a mouse and keyboard or, in the case of mobile devices, an onscreen controller, the best experience requires the real deal.

Good news: You can use Luna with a PlayStation DualShock 4 or Xbox One controller if you have one. If not, you can buy the Amazon Luna controller ($70, though often on sale for $50), which of course was built specifically for this service (and promises the least amount of lag). That’s what I used in my testing; I found it as comfortable and sturdy as any console controller.

I also tested Luna on a TV equipped with Amazon’s Fire TV Stick 4K Max ($55), though it’s compatible with just about every Fire TV Stick as well as Insignia and Toshiba Fire TV Edition TVs. As noted previously, if you have an Amazon Prime membership, you could try it out on, say, your PC or phone with absolutely no extra hardware needed.

The joy of a game-streaming service lies not just in the freedom from pricey console hardware, but also in the speed of the gaming experience. See, it feels like every time I fire up my Xbox One, I have to wait while it downloads and installs a software update — which takes forever. Installing a new game can take even longer (literally hours in some cases). And even just launching a game often leaves me drumming my fingers for minutes on end.

With Luna (and services like it), no more waiting. Any updates happen on the back end. And when you launch a game, it usually takes no more than 10-15 seconds before you’re greeted with the start menu. That’s utterly glorious, a huge point in favor of streaming over consoles. (The downside, of course, is that you’re subject to the whims of server overload, poor connectivity and other variables.)

OK, but what games can you actually play? Amazon currently offers half a dozen “channels,” each with different selections. You can subscribe to as many or as few as you like, with no contracts or obligations. Here’s a rundown:

Even if you were to subscribe to all the channels, you’d be looking at $44 monthly — less than the cost of a single new-release game. Of course, I suspect most users will opt for just a couple at a time, in which case Luna feels like a very affordable option.

However, it also feels lacking in some important ways. I’m disappointed it doesn’t currently support the games I already have in my Amazon library, a pretty big oversight. I also wish I could access my other external game libraries, like Origin and Ubisoft. (Ubisoft+ doesn’t allow me to stream games I already own.)

Indeed, the holy grail for any cloud gaming service would be easy, no-additional-charge access to personal game collections. If I already bought something, either for PC or console, I want to be able to stream it. Unfortunately, that’s not in the cards, at least for now. And if you want to play new releases, well, you’re mostly out of luck there as well.

Luna’s dashboard is thoughtfully designed and easy to navigate; anyone with even a little console experience will feel right at home. I tried a variety of games, including the dazzling horror shooter Metro: Exodus, racing sim Dirt Rally 2.0 and fighting game The King of Fighters ’98. Each one exuded console-quality looks and gameplay — but with zero time needed for installation and lighting-quick load speeds.

In this respect I’m a total convert. Luna is also incredibly easy to travel with: Just pack your Fire TV Stick and controller and you can bring your games to just about any TV. Of course, you can travel even smaller than that with a phone or tablet. As long as you’ve got fast Wi-Fi, you’re all set.

That’s where things can get a little dicey, though. I have very fast internet service in my house, but I did encounter occasional stutters during gameplay. Any such lag can seriously diminish the experience, especially during multiplayer games; it’s one area where consoles have a big advantage. During one particularly tense moment in Metro: Exodus, there was a hiccup right when a monster jumped out — and I died as a result. Granted, I died lots of times in that game, but that was due to poor aim.

Speaking of multiplayer, the Luna Couch feature allows co-operative play with others who aren’t, well, on your couch. It effectively takes the co-op experience nationwide, allowing for remote sessions that would normally have to be local. Thankfully, this works even for players who aren’t Luna subscribers.

Hardcore gamers may take issue with one particular Luna limitation, however, and that’s resolution: It currently tops out at 1080p (at 60 frames per second), while modern consoles can deliver 4K. Does that matter? Not to me; I’m utterly dazzled by the graphics on display in games like Metro and Dirt Rally. That said, Google’s Stadia service can do 4K. So can Netflix, for that matter. But for now, Amazon Luna can’t. I’m fine with that.

As it exists right now, Amazon Luna is an intriguing but flawed product. Cloud-based gaming, as a concept, is fantastic. No hardware to buy (except a controller or two), no games to download or store. You can sit down at your TV and start playing Immortals Fenyx Rising inside of 60 seconds. You can also liven up a party with any number of Jackbox games and pay just $5 for the privilege

However, Amazon needs a larger selection of titles, and newer ones at that. There’s currently no option to buy or rent new releases, nor can you tap any library of games you already own.

Personally, I haven’t found enough compelling content for me to want to continue. But if I had younger kids, the Family channel for $5/month would be a no-brainer. If I was fairly new to gaming and wanted to explore the big hits of yesteryear, I’d be all over the Retro and Luna+ channels.

In other words, there’s plenty to like here, all of it very reasonably priced. My advice: Wait for the next sale on the Luna Controller, then enjoy what the service has to offer. Hopefully it will offer even more in the months to come.

Looking for more great Amazon deals? Check these out: