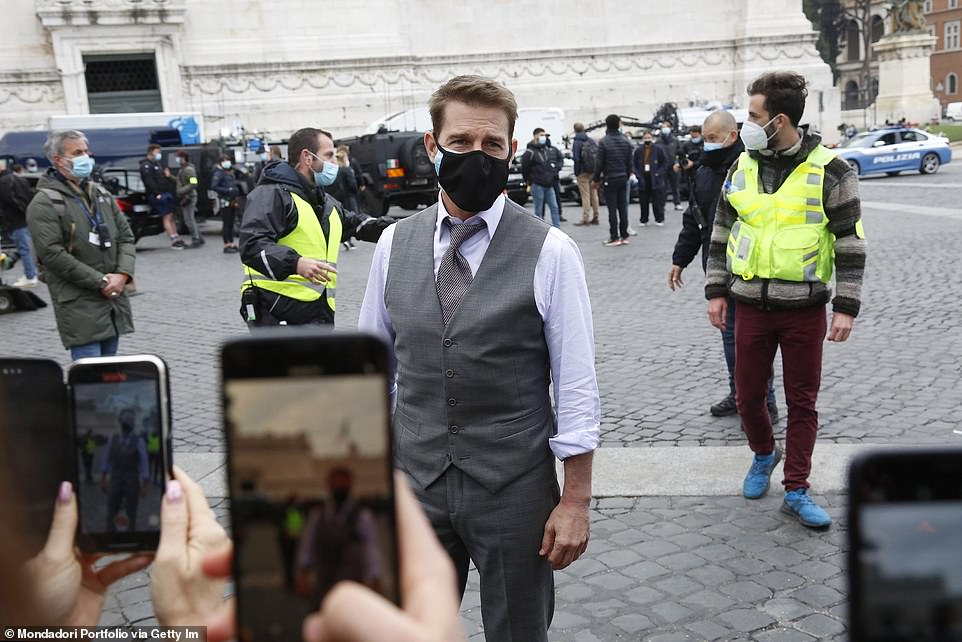 After several delays, one very public meltdown and countless attempts to work across multiple countries during a global pandemic the seventh instalment in the Mission: Impossible franchise may well be the most costly in its 26-year history.

The film will hit cinemas in July 2023 following a turbulent production, during which the returning Ethan Hunt – played by a seemingly relentless Tom Cruise – and an inflated studio budget both drove off a cliff.

For Cruise – who regularly performs his own daredevil stunts as central character Ethan Hunt – the opportunity to ride a motorcycle off a Norwegian rockface during one of the film’s more pivotal scenes was ‘something he wanted to do’ since childhood.

Coming soon: After several delays, one very public meltdown and countless attempts to work across multiple countries during a global pandemic, the latest Mission: Impossible film has been hit with spiralling costs (pictured: Tom Cruise on set in Venice)

Filming his own stunts: Hayley Atwell and Tom filming Mission Impossible in Rome, Italy in November 2020

But for concerned Paramount and Skydance Media bosses pulling off the stunt meant digging even deeper into increasingly threadbare pockets after the ongoing pandemic resulted in spiraling costs, Variety reports.

One notable factor in the film’s enormous budget has been the global pandemic, which swept across mainland Europe shortly after principal photography got underway in Venice in February 2020.

Action man: Cruise pulled of his most ambitious feat yet in November as he was seen hanging upside down from the wing of a World War II biplane while preparing for scenes for Mission Impossible 8 at Duxford airfield in Cambridgeshire

Lockdown and a desperate attempt to work around COVID-19 resulted in the production enduring an inauspicious start – with cast and crew forced to stop work after Northern Italy closed its doors.

The first day of principal photography was supposed to be filmed with the annual Carnival Venice serving as an elaborate backdrop, but after the event was cancelled director Christopher McQuarrie and his team relocated to Rome – only to be shut down once again when COVID cases in the Italian capital started to rise.

Sources claim constant infections, coupled with national health restrictions and the pandemic’s refusal to die down resulted in more costs, because crew members needed to be paid, given expenses and offered hotel accommodation during extended quarantine and lockdown periods.

The relentless pressure to finish the film may well have been the catalyst for Cruise’s high-profile meltdown on set in December 2020 after a crew-member breached COVID protocol – putting the production in further jeopardy.

Train wreck: In April 2021 Tom and co-star British actress Hayley Atwell were pictured filming on top of a moving train while shooting scenes in Yorkshire

Making a run for it: Tom dashed about on top of the train as it sped along at speed along the Yorkshire railway

That’ll be expensive! A dramatic scene featuring another steam train falling off a cliff was filmed in Derbyshire in August

‘We are the gold standard!’ A frazzled Cruise is heard yelling in a recording of the incident. ‘They’re back there in Hollywood making movies right now because of us!

‘I’m on the phone with every f— studio at night, insurance companies, producers, and they’re looking at us and using us to make their movies. We are creating thousands of jobs… we are not shutting this motherf***ing movie down. Is that understood?’

Sources claim there were further issues in 2021, when Paramount were confronted with a bill for $50million in overages, caused by co-producer Skydance declining to exceed their pre-agreed contractual requirement regarding financial contributions.

Meanwhile the film’s release date has been subject to change, with its original September 2022 launch pushed back to July 2022, with Paramount citing “delays due to the ongoing pandemic.”

The delay adds interest to an already overblown budget while having a domino effect on work-in-progress Mission: Impossible 8, which is now expected to launch on July 24 2024 instead of its intended release date, July 7 2023.

Daredevil: In September 2021 Tom parachuted from a helicopter in the Lake District for another set of high-adrenaline scenes

Getting involved: The actor is famed for performing his own stunts. Here he is racing a motorcycle through Venice in Mission: Impossible 7

Shut down in Europe: Lockdown and a desperate attempt to work around COVID-19 resulted in the production enduring an inauspicious start – with cast and crew forced to stop work after Northern Italy closed its doors

Head for height: Tom has also been seen multiple times during filming flying helicopters around London and York

Tough at the top: One of his more iconic scenes involved climbing Dubai’s Burj Khalifa – the world’s tallest building at more than 2,700 feet – in Mission: Impossible – Ghost Protocol

Rather you than me: The stunt sees Hunt attempting to reach the building’s 130th floor with the aid of suction gloves, before rappelling back the way he came

Work on the eighth instalment began last year, with the production so far experiencing few difficulties during location shoots across England.

In November Cruise appeared to pull off his most ambitious feat yet as he was seen hanging upside down from the wing of a World War II biplane while filming scenes as Ethan Hunt.

The actor was seen filming the death-defying stunt at Duxford Airfield in Cambridge, with the 1941 Boeing B75N1 Stearman biplane performing a stomach-churching loop-the-loop and nose-dive with the actor onboard.

A head for heights: Cruise films another thrilling scene for 1996 film Mission: Impossible

Cruise, dressed in a brown jumpsuit and helmet, clung onto the wing of the 80-year-old aircraft as it performed a nosedive and an array of aerobatics in a jaw-dropping stunt.

Other stunts performed by the veteran actor included  a 25,000 foot jump out of a plane as it flies above Paris in Mission: Impossible – Fallout.

He also climbed an astonishing 1,700 feet in the air for a high-flying stunt on Dubai’s Burj Khalifa – the world’s tallest building at more than 2,700 feet.

The stunt, filmed for 2011 release Mission: Impossible -Ghost Protocol, sees Hunt attempting to reach the building’s  130th floor with the aid of suction gloves, before rappelling back the way he came.

Speed demon: The actor showed off his process on a motorcycle while filming 2015 release Mission: Impossible – Rogue Nation

Don’t look down: Cruise had no problem scaling a cliff-face for a scene in 2000 film Mission: Impossible 2

It’s that man again: The actor is suspended upside down in a scene from 1996 film Mission: Impossible

In 2000 blockbuster Mission: Impossible 2 he climbed a 2,000-foot cliff in Utah, with little more than a safety rope in order to film a scene in which Hunt leaps from one cliff to another.

And then there is the divisive motorcycle sequence in Mission: Impossible 7, filmed on a clifftop in Norway – a scene that even Cruise admitted was riskier than anything else he’s managed to pull off.

‘This is far and away the most dangerous thing I’ve attempted,’ he told Variety at the time. ‘I wanted to do it since I was a little kid.’

Mission: Impossible 7 will be released in the United Kingdom and United States on July 14, 2023.