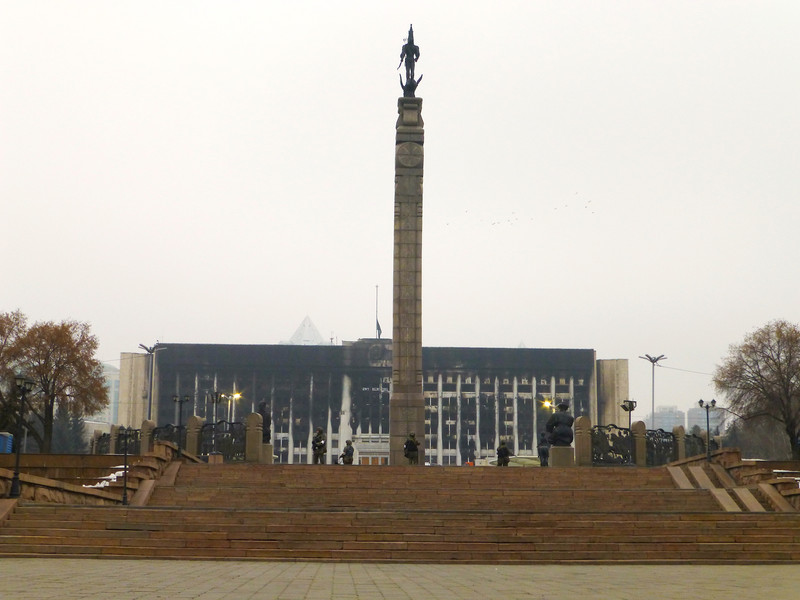 The events in January in Kazakhstan, previously known as an island of stability in an otherwise turbulent region, have received little follow-up attention, largely as a result of Russian president Vladimir Putin’s February invasion of Ukraine.

Civic protests swept Kazakhstan at the turn of the year, resulting in president Kassym-Jomart Tokayev issuing a “shoot to kill without warning” order.

Hundreds of innocent lives were lost, and thousands more were subjected to torture and arbitrary detention.

What role did Moscow play in ‘Bloody January’? Was Tokayev’s consolidation of power orchestrated from the start, or did he simply manipulate a crisis to isolate former president Nursultan Nazarbayev and secure all levers of power?

In early January, the Kremlin offered Tokayev Russian troops under the banner of the Collective Security Treaty Organisation (CSTO), putting Putin’s thumb on the scale in favour of Tokayev.

Putin does not see Russia’s security as being enhanced by stable and prosperous neighbours. Instead, his actions show that he prefers neighbours that are vulnerable and dependent.

In Georgia and Moldova, frozen conflicts prevent Tbilisi and Chisinău from fully integrating into European institutions.

Putin invaded Ukraine, when his choice of leader, Viktor Yanukovych, was replaced by Petro Poroshenko and then Volodymyr Zelenskiy — leaders who seek greater Western integration.

One would think Putin would be comfortable with the power-sharing deal that had been struck between Tokayev and Nazarbayev.

However, the last two years have seen this dual leadership yield relative stability.

It became clear that a move to distance the ageing Nazarbayev, leaving Tokayev in power, would make the latter both more fragile and dependent on Putin.

For those who didn’t follow the events in detail, a blow-by-blow account indicates that Russian intervention was planned well in advance.

At 6:54PM, a pre-recorded video of Tokayev was broadcast, announcing himself as chairman of the National Security Council. This step, in violation of Kazakhstan’s constitution, removed Nazarbayev from his powerful lifetime position.

For Tokayev to consolidate power, former prime minister and chairman of the National Security Committee, Karim Massimov, also had to be taken off the chessboard.

In this way, government officials, receiving an order from Tokayev, could not confirm with Massimov that Tokayev’s orders were also Nazarbayev’s wishes. Massimov was arrested immediately following the National Security Council meeting and remains in solitary confinement today.

At midnight, on the start of 6 January, president Tokayev said that he had requested CSTO troops “to help in overcoming [the] terrorist threat.”

At other points, Tokayev spoke of the existence of 20,000 foreign-trained terrorists, supposedly commanded by a special centre in Central Asia. These bandits were allegedly raping women, beheading police officers, and stealing bodies from morgues to hide the existence of fallen terrorists.

While no terrorists ultimately materialised, Tokayev’s order to “shoot to kill without warning” resulted in the deaths of 230 people — and that’s just going by the government of Kazakhstan’s own numbers.

At 1AM on 6 January, Armenian prime minister Nikol Pashinyan, then the Head of the CSTO, began consultations with its member states, announcing the official agreement to deploy troops to Kazakhstan at 3:26AM.

However, Belarusian news outlet Belta, reported that there had been a call between Belarusian president Alexander Lukashenko, Putin, and Tokayev, well in advance of Tokayev’s televised request — at 10:14PM on 5 January.

Lukashenko later even bragged that the operation “down to the details, was developed by two presidents — [those] of Russia and Belarus — within one hour.”

At 12:14PM on 6 January, elements of the 45th Spetznaz brigade, as well as other Russian troops arrived in Almaty, totalling 2,235 across 70 sorties.

Russian troops arrived a mere 9 hours after Armenia’s Pashinyan had announced the decision by the CSTO — this despite the fact Almaty is four times farther away from Moscow than is Kharkiv in Ukraine.

Given what we have recently seen of Russian military logistics, it strongly suggests that the military action by Moscow, with Tokayev’s compliance, was planned well in advance of Pashinyan’s announcement.

Later, when the Kazakhstani parliament was meeting to discuss the introduction of Russian troops, Azamat Abildayev, an MP, stated the obvious, saying: “There are 300 thousand armed forces in Kazakhstan … Why were the authorities waiting for 2,000 CSTO peacekeepers to arrive?”.

His microphone went dead and the government gave no response.

According to Tokayev’s own website, prior to the January crackdown in Kazakhstan and the February invasion of Ukraine, from December 2021 to February 2022, Tokayev held at least 11 executive-level meetings and calls with Russian authorities.

Tokayev has since publicly thanked Putin for sending in Russian forces under the CSTO banner, calling him a “comrade.”

Where does this leave Kazakhstan and Tokayev? In Putin’s debt.

And while Lukashenko’s role is for Belarus to be a staging ground for invasion, Putin may use a vulnerable Tokayev as an economic satellite to assist Russia in avoiding Western sanctions by rerouting trade and other deals via his new satellite country in Central Asia.