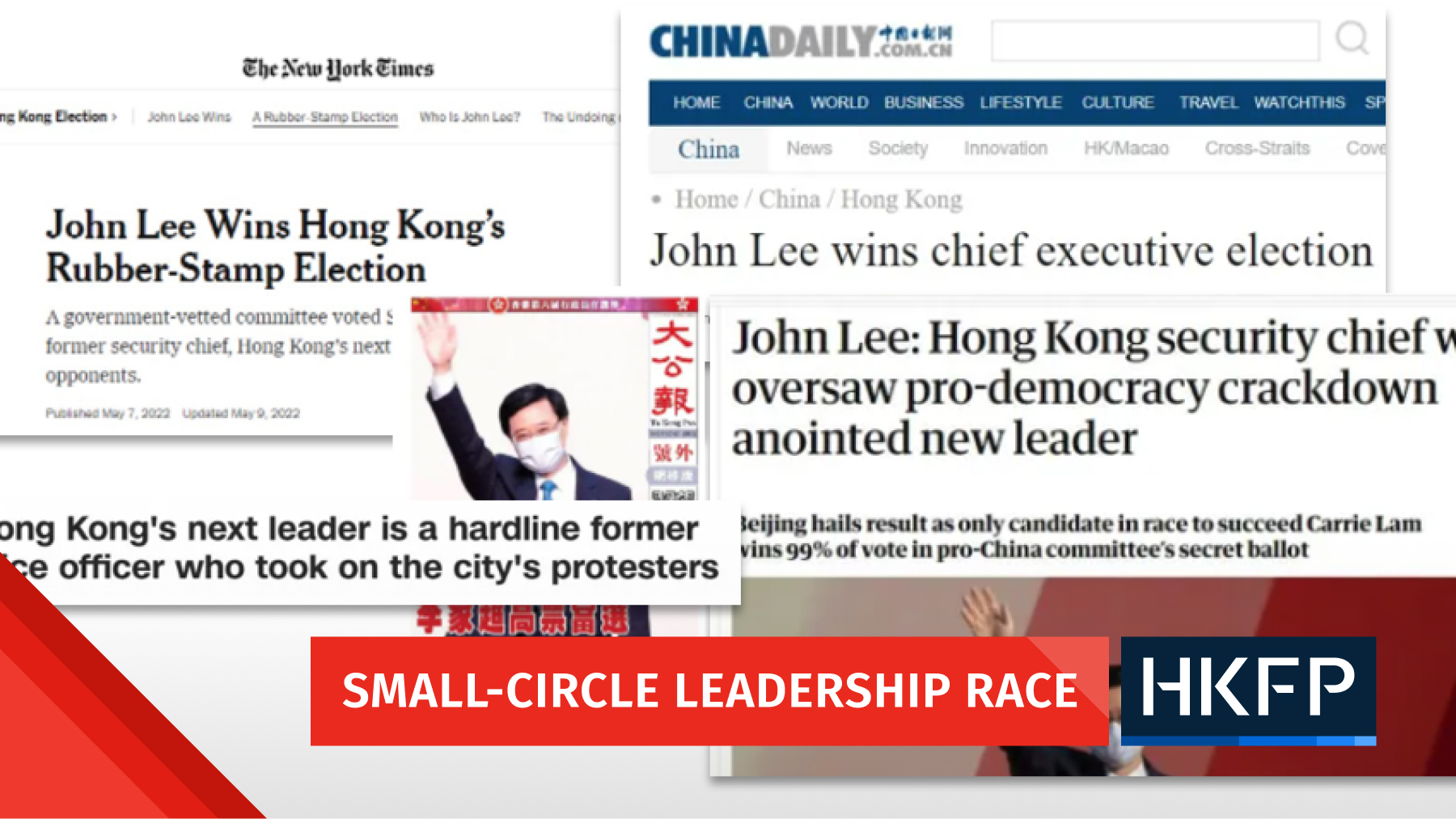 Hong Kong’s small-circle leadership race made headlines not only in the city but around the world. Local newspapers focused on the large proportion of votes received by former chief secretary and security chief John Lee, while overseas outlets emphasised Beijing’s role in his ascension to the city’s top post.

HKFP rounded up how local and international media outlets covered the chief executive election, after 99 per cent of a government-vetted committee selected Lee to lead the city.

The local newspaper, often described as centrist, also calculated that 33 Election Committee members did not vote in the race on Sunday.

On Monday, its print edition led with: “Lee’s election vow: Safeguard the rule of law, abide by bottom line thinking.”

The paper said that Chinese leader Xi Jinping said during a visit to Hong Kong on July 1, 2017, that there are three “bottom lines” that cannot be crossed under “One Country, Two Systems,” including endangering national security, challenging Beijing’s authority and the Hong Kong Basic Law, and using Hong Kong for infiltration and subversion activities.

When asked by reporters what the phrase meant on Monday, Lee said that it referred to “preparing for the worst as best as we can.”

Following the forced closures of pro-democracy outlets Apple Daily and Stand News, as well as the shuttering of Citizen News, InMedia has became one of the few remaining independent Chinese outlets in Hong Kong.

The online version of Ta Kung Pao, one of the city’s Beijing-controlled newspapers, published the headline “John Lee elected with high votes as Hong Kong SAR’s sixth chief executive” for its coverage of the small-circle leadership race on Sunday.

The next day, the print edition of the Ta Kung Pao devoted almost the entire front page to a photo of Lee and his wife, Janet Lam, after the election results were announced. The headline read “John Lee elected with a high number of votes, to lead Hong Kong to start a new chapter,” the second line a reference to his campaign slogan.

The piece cited the speech Lee made after ballot counting was completed, saying that he hoped every one could “happily welcome this historic day.”

The paper also published a 30-page supplement on Lee, looking into his 45 years in public service and his aims as Hong Kong’s top leader-to-be.

The South China Morning Post (SCMP) ran a live blog of the selection process, updating the story’s headline as events progressed. As of Sunday evening, the article was headlined “As it happened: John Lee confirmed as Hong Kong’s next leader with 1,416 votes, vows to recruit talent.”

On Monday, SCMP devoted its front page to the leadership race under the headline “Lee confirmed as city’s next leader.” The subtitle read: “Chief executive-elect vows to form a ‘passionate’ team to unite society still divided by turmoil of 2019.”

The piece also cited the only self-proclaimed non-pro-establishment member in the Election Committee, Tik Chi-yuen, saying that he voted in support of Lee “to show goodwill.”

Monday’s print edition of Oriental Daily led with a full page on Lee being selected as the city’s next leader featuring the headline “John Lee [elected] with 1,416 votes; the road is long and the burden heavy [for the] new chief executive.”

Below the newspaper’s fold, Oriental Daily published two more headlines, one saying that Lee has just a month and a half before taking the reins and needed to recruit figures for his administration, and the other stating that Lee was expected to be officially appointed by the central government within the week.

“[Lee] has actively exchanged opinions with various sectors since joining the race,” the piece read, adding that the chief executive-elect held “numerous meetings” with industry representatives, and that he had “reached out to communities to listen to the demands of grassroots residents.”

The piece published on Sunday described Lee’s “appointment” as “being widely seen as a move by the Chinese government to tighten its grip on the city,” adding that he was “known to be a staunch Beijing supporter.”

“For many, Lee’s ascension speaks volumes about the direction Hong Kong — once world-renowned for its robust press, flourishing civil society and democratic aspirations — is headed. Lee has already indicated that he will look to introduce further national security legislation and possibly a law against fake news,” the piece read.

“The elevation of Lee, subject of US sanctions, places a security official in the top job for the first time after a tumultuous few years for a city battered by political unrest and debilitating pandemic controls,” the piece, which was reported by AFP in Hong Kong, read.

“John Lee, a former security chief known for his staunch loyalty to the Chinese government, was chosen as Hong Kong’s next leader on Sunday, through a selection process tightly controlled by Beijing in which he was the only candidate,” the piece read.

“Hong Kong’s leader-in-waiting, John Lee, was endorsed for the city’s top job on Sunday by a committee stacked with pro-Beijing loyalists, as the financial hub attempts to relaunch itself after several years of political upheaval,” the article read.

AP described Election Committee members as “carefully vetted by the central government in Beijing,” and that “the elaborate arrangements surrounding the pre-determined outcome speak to Beijing’s desire for a veneer of democracy.”

The piece also said John Lee was “formally confirmed” to the city’s next leader, and that it “solidifies an era of more direct Chinese political control over the once-freewheeling financial hub.”