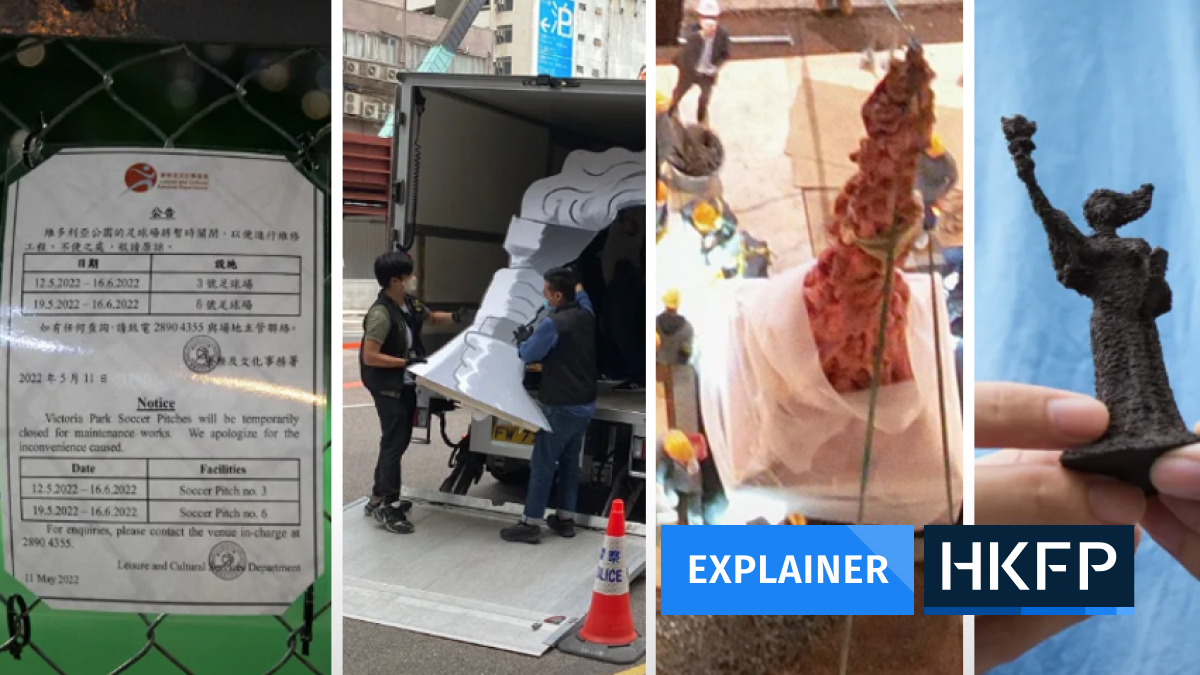 Mourners in several cities are scheduled on Saturday to mark the 33rd anniversary of the Tiananmen crackdown, when China’s military killed hundreds and perhaps thousands of protesters in Beijing. But for the first time, commemorations in Hong Kong are set to be largely muted.

Over the past two years, authorities armed with the Beijing-imposed national security law and citing Covid curbs have made dozens of arrests related to banned vigils and have erased physical mementos of Tiananmen. HKFP examines key moments.

Saturday is the first anniversary without the presence of the group which, for decades, organised mass mourning – the Hong Kong Alliance in Support of Patriotic Democratic Movements of China.

Formed in May 1989,the Alliance had organised annual candlelight vigils since 1990 in Victoria Park, where tens of thousands solemnly gathered for a de facto funeral, protest songs and speeches. It had five goals: release the dissidents, vindicate the 1989 pro-democracy movement, demand accountability from Beijing, end one-party dictatorship, and build a democratic China.

But after the national security law came into force, the city’s then-security chief John Lee, a former policeman who will take over as leader this July 1, said the calls to end one-party rule violated the sweeping legislation.

The Alliance disbanded after a vote by members last September following the prosecution of its leaders.

Seven former leaders and standing committee members of the Alliance face prosecution under the security law. Ex-lawmakers Lee Cheuk-yan and Albert Ho, along with barrister Chow Hang-tung, are accused of inciting subversion. The latter’s oratory in the courtroom remains of the few remaining public forums where the crackdown is mentioned. All three activists were denied bail.

Four former standing committee members, along with Chow, were charged with refusing to comply with a data probe by national security police. Two of them pleaded guilty and were sentenced to three months in jail.

Before 2020, Hong Kong was one of the very few places soil on Chinese where authorities allowed public commemorative events. Macau banned them on national security grounds in 2021, whilst Hong Kong cited Covid curbs on public gatherings to prohibit planned vigils in 2020 and last year.

But large crowds, including a number of prominent pro-democracy figures, turned out in 2020 in defiance of the ban. A total of 24 people, including media tycoon Jimmy Lai and activist Joshua Wong, were eventually brought to court and sentenced over the gathering.

In 2021, the police sealed off Victoria Park for the first time ahead of the vigil, but people gathered across the city to hold their own commemorations that evening.

Chow, the former vice-chairperson of the Alliance, was arrested on the morning of the 32nd anniversary, and was later jailed for 15 months for inciting others to take part in the banned commemoration.

Football pitches at Victoria Park, where crowds once gathered, have either been booked for other purposes on June 4 or have been placed “under maintenance.”

Catholic authorities in the city said last month that their churches would not hold commemorative masses, citing fears over the security legislation, but there might still be small-scale church masses. The Ward Memorial Methodist Church held a “prayer meeting for the peace for the people of the country” on Monday.

Overseas groups including Amnesty International have planned memorials and events across the globe.

Physical reminders of the 1989 clampdown have also been removed.

The June 4th Museum, managed by the defunct Alliance, was raided by national security police a day after the group’s leaders were arrested. Exhibits, including publications and leaflets from 1989, were taken away as evidence. The museum’s website was blocked in Hong Kong three days after the raid.

The museum was already closed at the time, following accusations several months previously that it was operating without a licence.

HKFP also found that 29 books about the crackdown were removed from the shelves of public libraries last year.

The University of Hong Kong (HKU) removed a statue known as the Pillar of Shame from its campus in December last year.

The Chinese University of Hong Kong (CUHK) took away a Goddess of Democracy statue and Lingnan University removed a commemorative relief the following day.

Swire Bridge, a section of pavement at HKU bearing a slogan dedicated to the victims of the crackdown, was covered up in January and later replaced with potted plants.

With Covid curbs on outside gatherings still in force and uncertainty over the security law’s “red lines,” Hong Kong is unlikely to see major public commemorations, though some anonymous student volunteers have hidden tiny Goddess of Democracy statues across CUHK’s campus.

Simon Leung, a former standing committee member of the Alliance, and one of the two who was jailed for three months over the data refusal case, told HKFP that while he would still mark the date, he had yet to decide how to do so.

“I still hope that [we] can still commemorate June 4th, especially when there is no one from the government saying that commemorating June 4th is illegal. I think [we] should not guess where the red lines are,” said Leung.

Chan Po-ying, chairperson of the League of Social Democrats, one of the few remaining active pro-democracy groups, told HKFP the group had yet to decide whether to hold any events.

“You can see that the government has been using a lot of different laws to restrict our freedom of expression and speech,” said Chan. “This year, apart from the national security law, there are also a lot of other laws. Of course we will have certain considerations.”