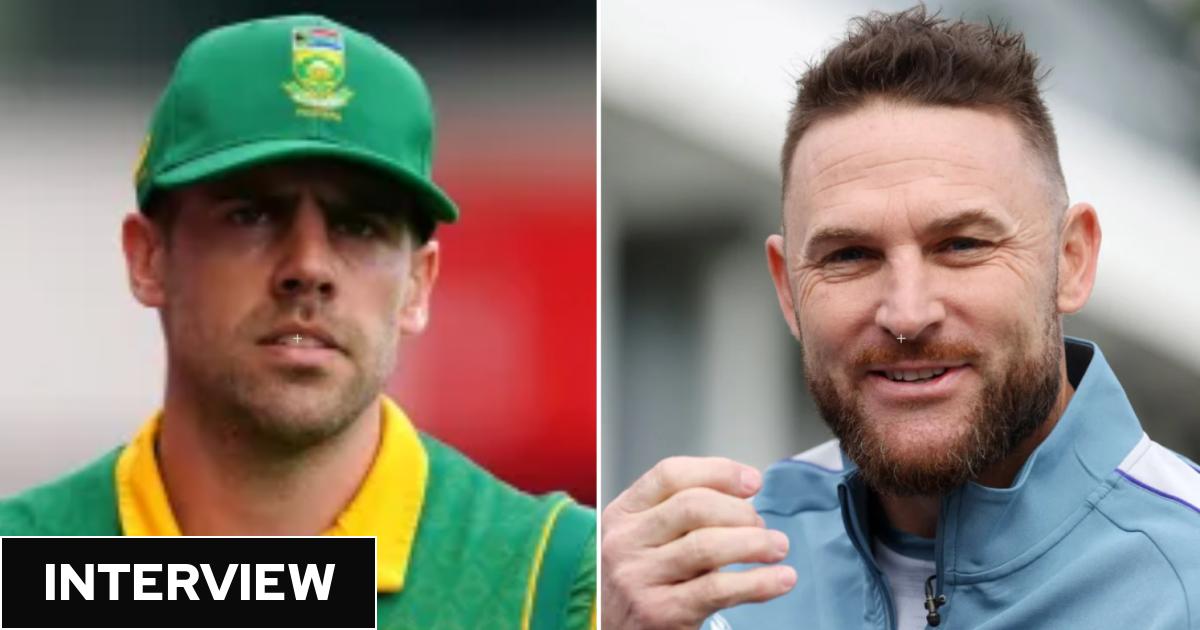 “I don’t know what you are talking about, you’re talking a totally different language.”

The reaction of Anrich Nortje made it clear that Bazball is a dirty word in the South Africa camp.

Nortje, a hulking fast bowler who has England in his sights ahead of next week’s first Test at Lord’s, is not a guy you want to annoy.

Unfortunately, that’s exactly what happened during our interview in Canterbury yesterday when the subject of England’s new aggressive style of Test cricket under coach Brendon McCullum came up. Otherwise polite, engaging and charming, the B-Word hit a nerve that gave this interviewer a taste of just what it’ll be like for England’s batters when Nortje fixes them with his ice-cold stare during the upcoming three-match series.

“We’re here to play Test cricket,” started his initial response as we chatted during the final day of South Africa’s warm-up defeat against England Lions.

England have chased down four hefty totals in as many matches this summer, including 378 in their last Test against India at Edgbaston last month. The Lions racked up 672 in equally cavalier fashion to set up a crushing innings-and 56-run win in a match Nortje was rested for.

So how do you counter that aggression as a bowler? Again, what about Bazball? “Don’t think about it, don’t care – sorry,” says Nortje. “We’re focussed on Test cricket like I say.”

“I’m saying we’re focussed on Test cricket. I don’t know what you are talking about, you’re talking a totally different language.”

Nortje was rather less forthcoming than Dean Elgar, his captain, who in an interview with Wisden Cricket Monthly stated that England’s aggression leaves them at risk of having “egg on their faces” at some point.

Elgar’s comments emerged on Thursday, the day South Africa’s bowlers were taken to the cleaners by the Lions in Canterbury.

In light of the timing, i understands, South Africa have unofficially forbidden their players from mentioning Bazball both internally and externally.

A Bazball ban? Not exactly but the term, one which even McCullum admits he doesn’t like, is something South Africa most certainly don’t want to buy into.

The feisty nature of the exchange gives a glimpse into the psyche of a bowler whose raw speed and aggression threatens to give England their toughest examination in Test cricket this summer.

Remarking that Nortje, the leading wicket-taker in the last series between these sides in South Africa during the winter of 2019-20, is the kind of bowler who relishes getting involved in on-field confrontations, the 28-year-old admits: “Yes, 100 per cent. When it starts getting tough that’s when that little bit of extra energy and adrenaline comes out. The way the summer has gone so far it’s most probably going to happen in most of the games. I’ll just have to get ready for those moments, identify them and get on top when I can.”

Nortje grew up in a town called Uitenhage – recently renamed Kariega – that lies 20 miles north of Port Elizabeth and is home to the largest Volkswagen plant in Africa. “There are lots of Polos,” he jokes.

No wonder he is obsessed with speed, admitting South Africa fast-bowling legend Dale Steyn was his hero growing up.

“I’ve always been bowling fast whatever age group it was,” says Nortje. “I always wanted to go faster and faster. I looked up to Dale, the aggression and the type of game he played. But I liked anyone who put some gas on, bowled good bouncers. They were just so exciting to watch.”

Nortje clocked the fastest ball in Indian Premier League history back in 2020 – a 97.1miles-per-hour delivery that Jos Buttler ramped for four to prove that pace doesn’t always win the day.

But it is Test cricket that remains king for the South African – a refreshing admission in the week that fellow fast bowler Trent Boult walked away from his New Zealand central contract.

And Nortje will be looking to make up for lost time when the series against England starts at Lord’s on Wednesday given it will be his first Test since June last year following hip and back injuries that kept him sidelined for much of the past year.

“Test cricket is the ultimate,” he says. “It’s hard on the body but I’m really excited to be playing again – it’s been a long time for me.”