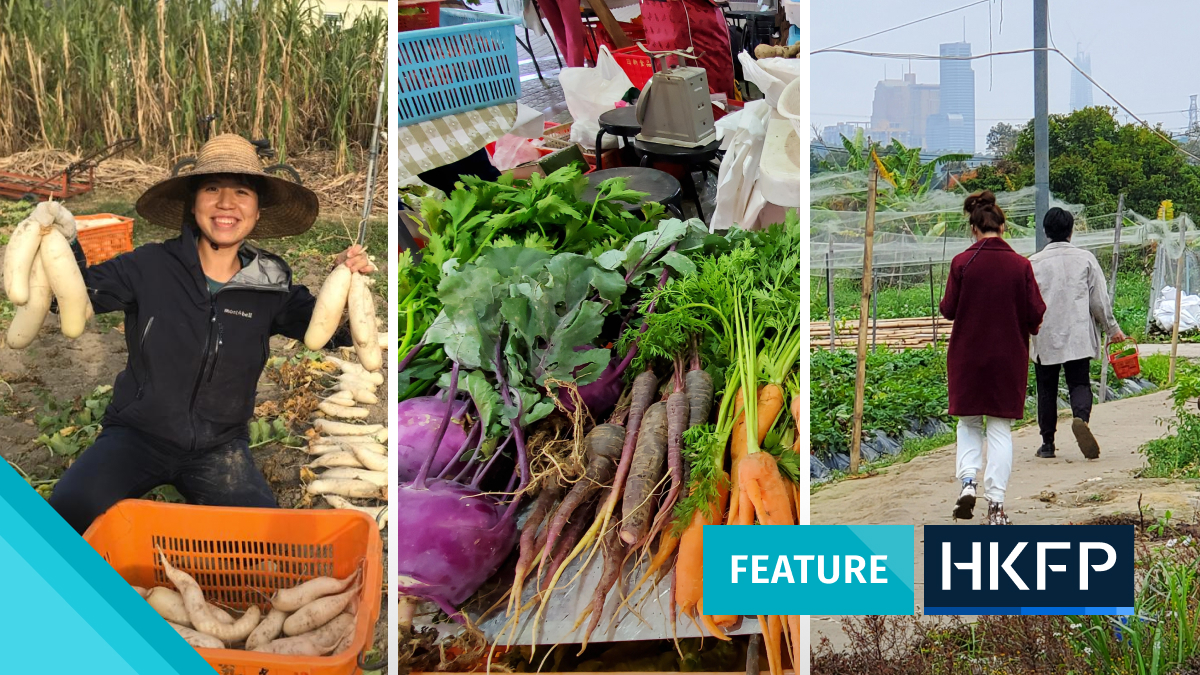 Sporting a face mask-induced sunburn and with a towel around her neck, Kelly Lau hacks away at the soil with a mattock.

The 25-year-old is digging a ditch at a farm in Pat Heung, a village in Yuen Long, to stop crops being flooded during the rainy season.

“Being a farmer is not romantic,” Lau tells HKFP on a balmy spring afternoon. “Try it and you would know. A red ant crawled into my pants just now and bit me.”

Lau has been working at AuLaw Organic Farm for just over two years. As a student at the Chinese University of Hong Kong, she joined a group promoting local agriculture out of curiosity. Her time there opened her eyes to the city’s farming industry, something she previously knew little about. After graduating in 2019, she did a short stint at an agricultural NGO – but quit because it was “quite boring.”

“At the time, I wanted to develop myself in the farming sector, but I needed to build a foundation and pick up skills and techniques,” she says. “So I came here to learn.”

Lau is not alone. Across Hong Kong’s rural districts, more and more young people – volunteering as farmhands or taking on the work full time – are showing an interest in farming.

Angus Lam, chairperson of the NGO Sustainable Ecological Ethical Development Foundation, says his organisation has been running farming 101-style courses for two decades. “Before 2010, it was mostly retirees who joined. But these few years, the proportion of young people joining has increased,” Lam tells HKFP.

Politics, he observes, is partly behind the phenomenon.

With protests quashed by Covid-19 rules and dozens of activists jailed under the Beijing-imposed national security law, people are moving from the streets that once saw mass marches to Hong Kong’s verdant hinterlands to cultivate a sense of local identity.

Lau began working at AuLaw Organic Farm in November 2019, during the heat of the anti-extradition protests. The unrest, she says, made her want to “do something” for Hong Kong.

“Everybody felt very down during that time. But on the farm, you feel like you can contribute a bit,” she says. “Not that I could change anything big, but on a daily basis I could water crops and grow vegetables for Hong Kong people to eat.”

Hong Kong is heavily reliant on mainland China for its food supply, with 92 per cent of its vegetables coming from across the border. The rejection of mainland produce in favour of buying – and growing – local has for some people become a way of expressing solidarity with the pro-democracy movement when few methods remain.

In February, as Covid-19 disruptions caused the price of mainland produce to soar, the vulnerability of Hong Kong’s vegetable supply chains were exposed for all to see. Hongkongers created a crowdsourced Google spreadsheet consolidating a list of physical stores, online shops and farmers’ markets offering local produce.

“When there is a crisis, that’s when you see where the weakest links are,” Lam says. “No matter how much a city modernises, it should maintain its own production so everyone can have a sense of safety.”

Made in Hong Kong

While the supply from the mainland has largely returned to normal, the owners of neighbourhood stores selling local produce say the shock of temporary shortages proved a “good educational opportunity.”

With two shops in Sheung Shui and Tai Wai, BeWater Mart has received more inquiries in recent months from people interested in purchasing vegetables, store founder Dream Law tells HKFP. Every day, he and his business partner take turns going to the farms they cooperate with to pick up produce.

“We’ve increased our stock by around three times,” Law says. In response to growing interest, the shop began offering vegetable delivery in April.

BeWater Mart – its name a nod to a 2019 protest mantra meaning to respond fluidly – sells almost exclusively Hong Kong-produced goods. Besides vegetables, the shops’ shelves are lined with everything from local craft beer to accessories to organic soap.

“I want to create a Hong Kong version of [Don Don] Donki,” the 30-year-old says, referring to a Japanese superstore that sells only Japan-made products.

Down a quiet Tuen Mun lane at the other end of the New Territories, Eric Chung and his business partner run Gaang One. The grocery store’s name is a Cantonese play on the word for “farming.”

On a Sunday afternoon, there is barely a quiet moment as customers come and go to collect their vegetable orders. The shop, about the size of a parking space, is too small to stock the variety of produce supplied by the dozen or so farms it works with. Gaang One runs a “pick up day” for customers to collect their produce, much of which spills out of the shop, every Sunday.

“Often, we say we love Hong Kong. But what does that mean?” Chung, 32, asks, adding that one’s consumption choices are strongly tied to identity.

Around 700 kilometres from Hong Kong, Elise Tsang is studying for her masters in agriculture in Taiwan. Her decision to pursue the degree was inspired by her year spent living in a village house in rural Sheung Shui, which she moved into in 2020 from her parents’ home. She was in the final year of her bachelor’s degree at the time.

There, the budding farmer helped out on farms and invited her friends, and friends of friends, to learn how to plant seeds, water crops and produce a harvest.

“Outside, everything was messy. There was the pandemic, and before that, the protests in 2019,” the 24-year-old tells HKFP.

“There’s a powerful message behind that saying. Those words can really move people, especially during these times.”