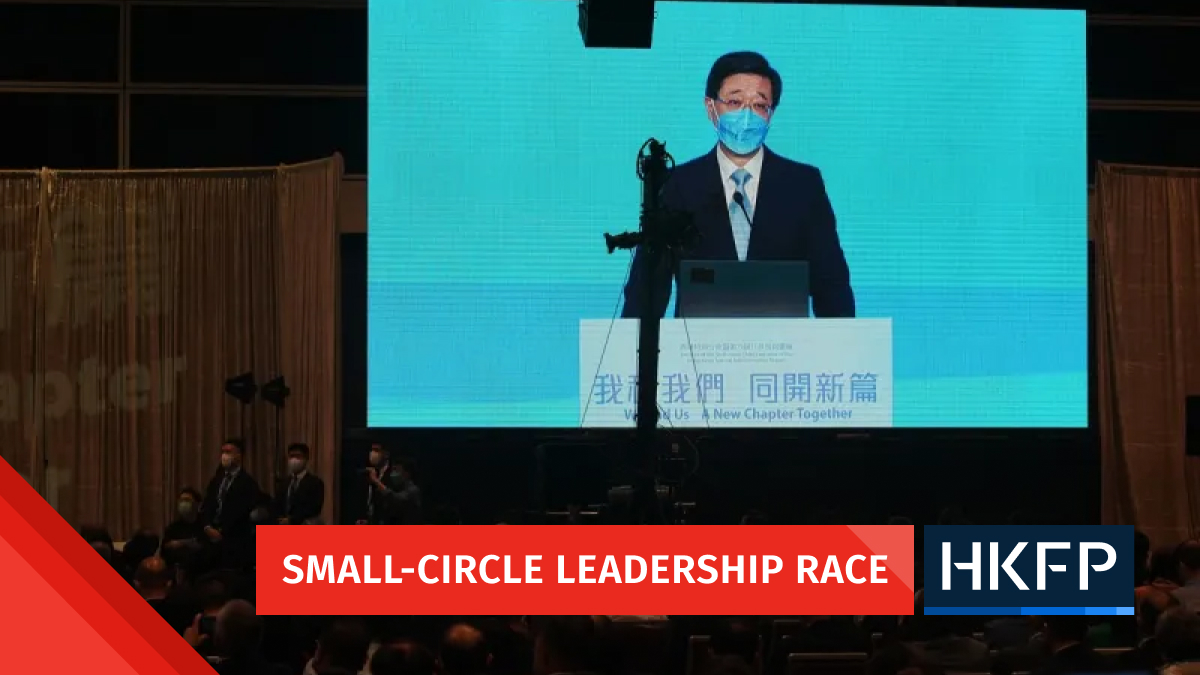 Hong Kong’s sole chief executive candidate held a closed-door rally on Friday, with more than 1,000 prominent Hong Kong figures, including business leaders and those who will vote in the small-circle race on Sunday in attendance.

Speakers at the event, including Lee and former chief executive Leung Chun-ying, emphasised the city’s stability and security, and urged the public to have a “collective mindset.”

At the start of the rally, Lee’s election campaign director Tam Yiu-chung praised the Election Committee members – who constituted the majority of the participants – as “role models for patriots.” They were installed under a “perfected electoral system,” Tam said, and were “broadly representative” of Hong Kong’s society.

Tam then invited six guests to talk about their hopes for the upcoming administration.

They were a secondary school student, the president of the India Club Nanu Lachman, former police commissioner Tang King-shing, table tennis athlete Doo Hoi Kem, the head of the University of Hong Kong-Shenzhen Hospital Lo Chung-mau, and David Wong, a member of the National People’s Congress.

All of the invited speakers either showed support for Lee’s election manifesto or spoke of the benefits brought to Hong Kong by mainland China. For instance, the student suggested the next administration introduce cooperation between enterprises and schools in the Greater Bay Area and financial hubs such as Shanghai, while Doo thanked the mainland for the support she received when training there before last year’s Tokyo Olympics.

Citing President Xi Jinping’s quote that “security is the prerequisite of development, while development is the protection for security,” Wong said Lee had “helped Hong Kong to restore order from chaos.” He said he believed that Lee could coordinate both security and development of the city, “leading Hong Kong from order to prosperity.”

Speaking just before Lee, Leung, who also acts as the chief convenor of the Election Committee, said the world was experiencing unprecedented changes and that such evolution would only accelerate in the future.

“Therefore, the entire society of Hong Kong needs to share the same will, reduce internal discord, be considerate of the bigger picture, have a collective mindset, be willing to contribute and mindful on dealing with the relation between self and the whole,” Leung added.

Before Lee’s appeared on the stage, the organisers of the event turned off the lighting in the venue and asked attendees to raise their phone torches to welcome the leadership candidate.

On stage, Lee spoke about what led him to join the city’s police force. He said he was robbed by some older schoolmates when he was a student and he was punched in the chest for having no money to offer them.

Lee said that was the first time he felt angry while not daring to speak up, prompting him to become a police officer to “protect the citizens and the underprivileged.”

He said he planned to “safeguard the core value of rule of law,” “protect the constitutional order,” “maintain a clean and efficient administration” and “establish a safe and stable environment for Hong Kong to raise its competitiveness in all aspects and step forward without any worries.”

The campaign rally was not open for the general public to join.

Among those invited to attend were the 1,461 Election Committee members who will cast their ballots on Sunday, and Lee’s campaign advisory groups consisting of around 150 prominent political and business figures.

Tam said on Thursday that all of the attendees had to undergo rapid Covid-19 tests beforehand and urged people who were not invited “not to attend.”

Members of the press had to go through two stages of security checks before entering the premises, including a police sniffer dog and an airport-style security check involving metal detectors.

Under current anti-epidemic measures, public group gatherings are limited to a maximum of four people.

However, Lee’s rally and other election-related indoor events were exempted because of “the exceptional circumstances” and them serving “the public interest of Hong Kong,” according to a government statement published on April 2.

The exception was granted by the chief secretary for administration – Lee himself – four days before he resigned from that position to run in the chief executive election.