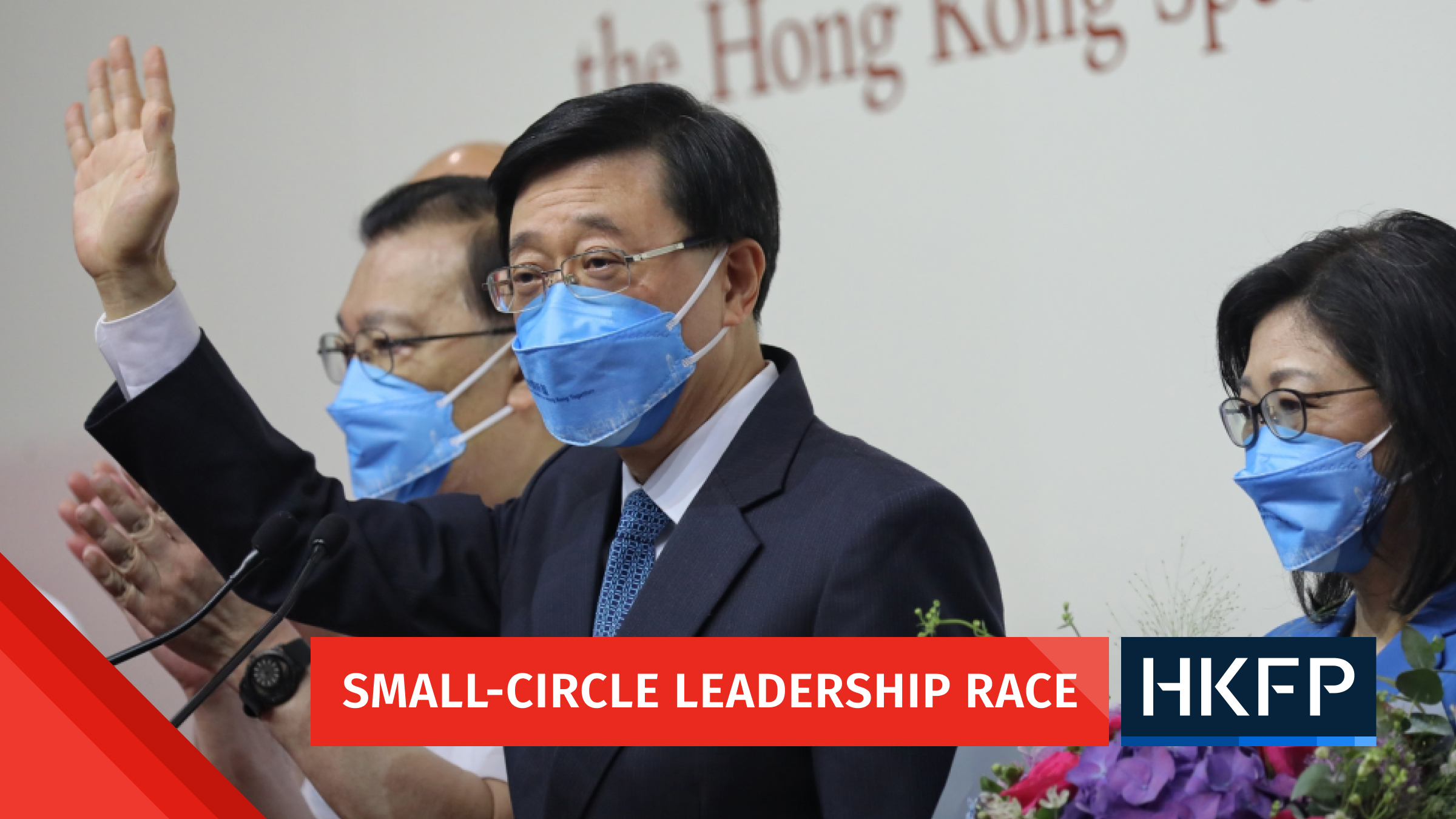 Hong Kong’s Chief Executive-elect John Lee has thanked Election Committee members for voting for him and said that he hopes Hong Kong will become more “caring, open and vibrant” under his leadership.

The 64-year-old, who was the sole candidate in Sunday’s small-circle race, was selected with 1,416 votes from members of the Election Committee, a group of 1,461 elites vetted by Lee as chief secretary. Lee received eight “not support” votes, and four blank votes were cast.

The Hong Kong public has never been allowed to elect its own leader, a right reserved for the Election Committee.

In his first press conference as Hong Kong’s next chief executive, Lee said he was “honoured” to have been selected to lead Hong Kong.

“I will take on this historic mission, this major responsibility, with loyalty and determination to unite and lead the 7 million people of Hong Kong,” he said.

Lee reiterated points in his political manifesto – which was only published last Friday – and said he would prioritise tackling Hong Kong’s deep-rooted housing shortage. He added that he also aims to improve healthcare systems and enhance social mobility for the city’s youth.

“It’s not that the many long-term problems in Hong Kong cannot be solved. It’s that the results [of policymaking in the past] have not met people’s expectations,” Lee said.

He said he would recruit a governing team with experienced, capable figures. It is unclear if, or how many of, the top officials in Carrie Lam’s administration will join Lee’s.

Sunday’s race was the first since the central government decreed an electoral overhaul last year.

See also: Explainer: Hong Kong’s Election Committee determines who leads the city – what is it and how does it work?

Under the changes to the system, the Election Committee was expanded from 1,200 to 1,500 seats, with the addition of a new sector consisting of figures with close mainland ties. The government says the elite voters are “broadly representative” and will ensure the city’s stability and prosperity, though they make up only 0.02 per cent of the population.

Critics of the overhaul said the dramatic changes further reduced the legitimacy of the race with the introduction of a vetting team – which was helmed by Lee himself before he stepped down from his chief secretary position to run for the role – to ensure only “patriots” could run.

In a statement published shortly after the race results were announced, incumbent Chief Executive Carrie Lam sent her “sincere congratulations” to Lee on his “successful election.”

“[L]ater today, I will submit a report of the election result to the Central People’s Government. The present-term government and I will ensure a seamless transition with the Chief Executive-elect. We will render all the support needed for the assumption of office by the new term of government,” she said.

Lee will take the reins from Lam on July 1. Local media has suggested that he will be sworn in by Chinese leader Xi Jinping, who also visited Hong Kong to install Lam in 2017.

Referring to the eight electors who did not vote to support him, Lee said he thanked them for coming out anyway.

“The chief executive election is an important thing. Their presence here signifies the importance of the elections,” he said.

Lee started his public service career in the police force when he was 20 years old. He climbed his way up in the force and served as the security secretary and the chief secretary before resigning to run for chief executive. Lee is the first former officer from the government’s security branch to lead post-colonial Hong Kong.

“I went from a nobody to [ascending to] such an important post to serve Hongkongers,” he said, adding that his experience of campaigning – which did not include engaging with members of the public – was “unforgettable.”