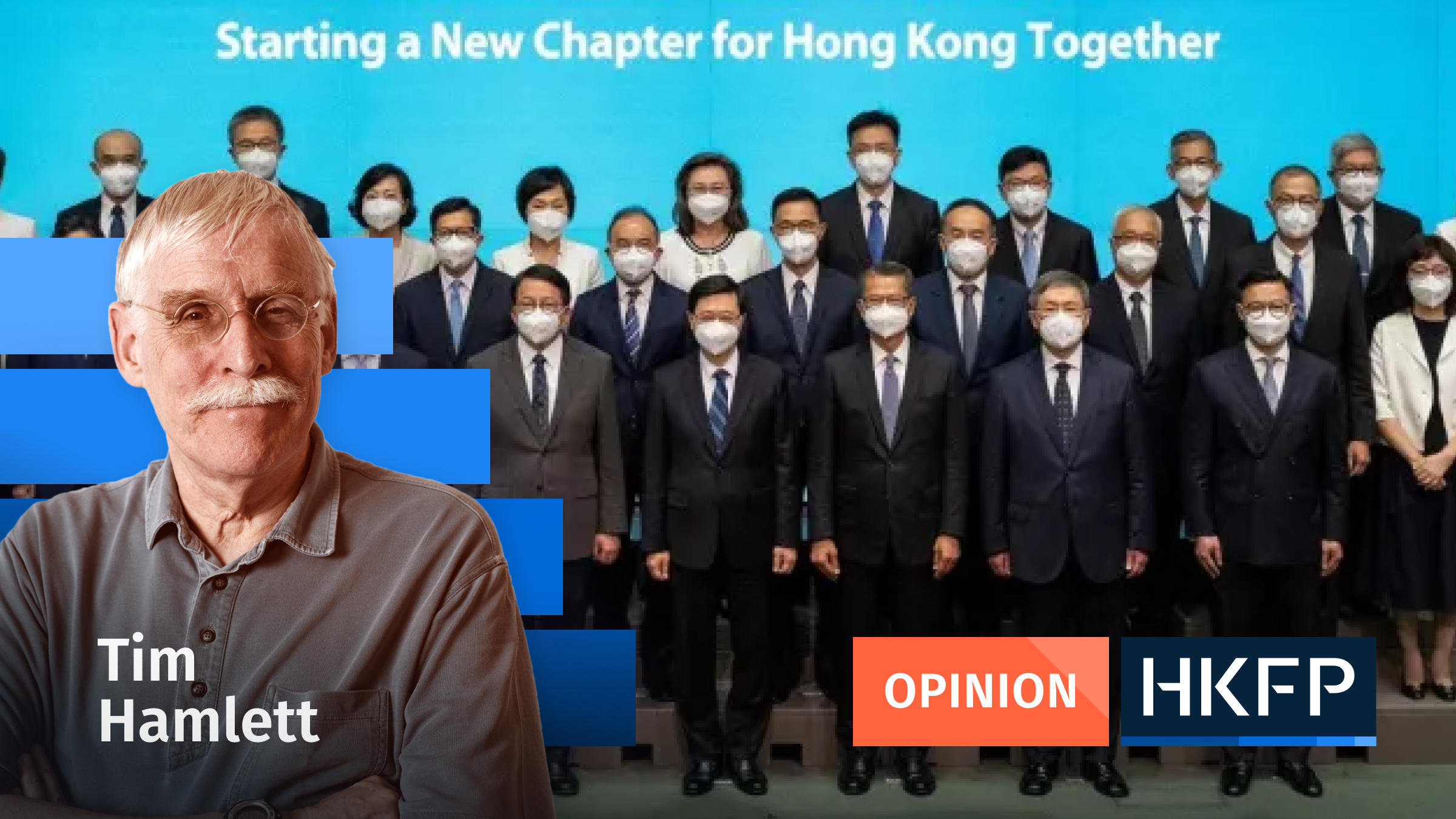 The inauguration of the chief executive’s new fleet of apparatchiks provided the occasion, as such events usually do, for some exceptionally depressing official photography. Here is John Lee’s new team, in the smaller version.

Several things stand out immediately. Firstly, the exalted reaches of government service are not a uniformed branch but somebody has done their best to make them look like one. Every visible male is wearing a standard single-breasted suit in shades of dark blue or black, except the chief secretary (dark grey) and the deputy secretary for justice (double breasted).

Every visible male is wearing black shoes (understandable given the suiting rules) a white shirt and a blue tie. Were orders given on this last point, one wonders? Is this a subliminal sign of support for our glorious cops? Face masks in any colour you like as long as it’s white.

All our males have one jacket button done up – the same one – and stand in the same pose: hands by sides, feet close together, toes slightly apart.

The women have been relegated to the back row, where they can barely be seen. Inclusivity was clearly not a major consideration in the selection process because only five of the 21 “political appointments” are women.

Somebody seems to have noticed that this was not a good look, because there is a second photo on the Government website, in which the number of victims rises to 28.

Two of the women from the back row of the first photograph have been moved to the second row – albeit on each end of it. The three remaining in the back row have been joined by two more, also on the ends of the row, bringing the gender balance to seven out of 28. This could be considered disappointing, at least if you had unreasonably high hopes.

Looking at the accompanying verbiage you can see the way in which an unchanging law can lead to very different outcomes. The Basic Law says that the central People’s Government shall appoint the “principal officials” of the Hong Kong SAR.

In 1997, if I remember correctly, this was interpreted to mean the chief secretary, the financial secretary and the secretary for justice. Other heads of departments and bureaux were civil servants who were allowed to swim up to the surface of the administrative cesspool in the usual way.

Lee thanked the Central authorities for accepting no less than 26 nominations. These comprised the 21 “political appointments”, who are supposed to work under the “accountability” system and are subject to the searching scrutiny of our tame LegCo, plus the heads of the disciplined services (police, fire, immigration) the Independent Commission Against Corruption and the audit office. Who’s next?

I notice also that in his speech Lee, in what may have been a Freudian slip rather than a premeditated change of policy, hailed the success of “one country” without putting the “two systems” on the end of it. Not much of a loss, perhaps. Many of us do not believe in that stuff any more.