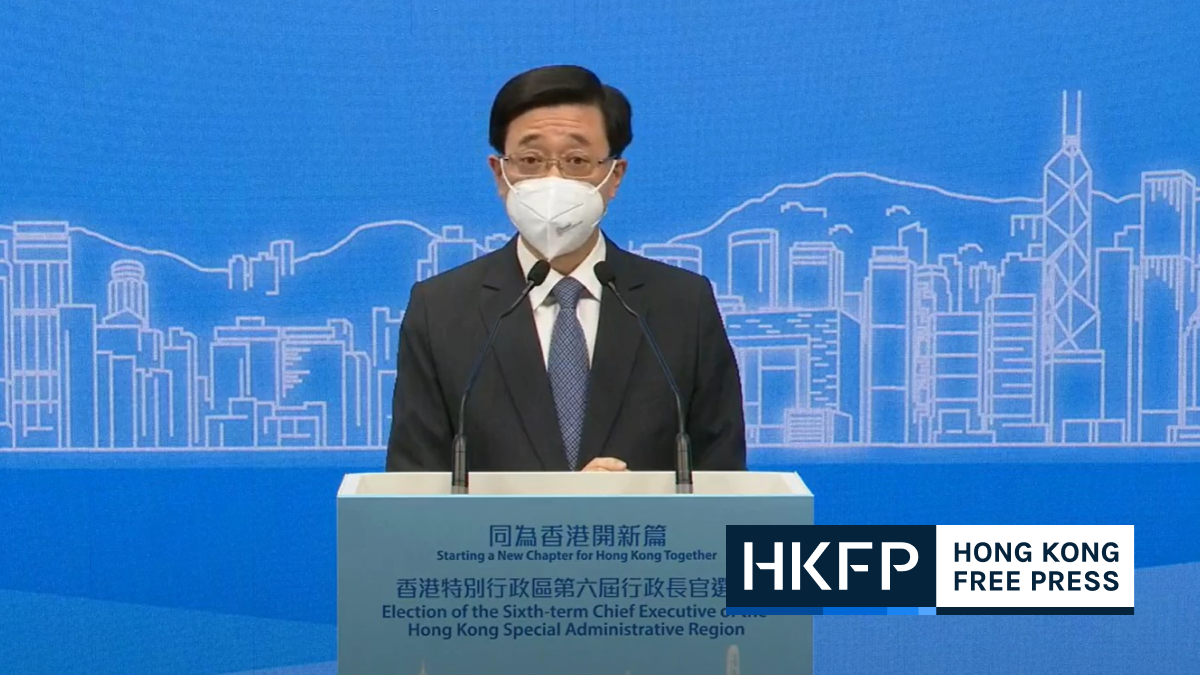 Hong Kong’s former number two official John Lee has formally announced his run in next month’s small-circle chief executive race, saying his decision was made out of “loyalty” to mainland China and Hong Kong.

“If successfully elected, I will lead the sixth-term government to openly, frankly and respectfully engage with the Hong Kong people and listen to their voices,” the 64-year-old said during an online press conference on Saturday.

During an eight-minute speech that was light on policies for how he would lead the city, Lee said he sought to resolve deep-rooted issues with a “results-oriented approach,” increase the territory’s competitiveness and “consolidate a firm foundation for Hong Kong’s development.”

When asked by a reporter about what a “results-oriented approach” entailed and how he would mend divisions in society, Lee did not answer directly.

“Of course, young people have their own views, and we understand that. I would suggest for everyone to use the results to see our sincerity,” he said, adding that results “represent everything” and are “the most objective.”

Hong Kong will hold its small-circle leadership race on May 8. The Election Committee, which consists of 1,462 largely pro-establishment figures, will decide who will govern Hong Kong for the next five years.

Lee, so far the only person expected to run in the May 8 election, made the announcement during an online press conference to which HKFP was not initially invited. Lee’s public relations team told a reporter on Saturday morning that attendance was limited to “mainstream media” and suggested watching the press conference live on Facebook or YouTube, where it would be livestreamed, instead.

Local independent outlet InMedia reported on Saturday that it had not been invited to attend the press conference, with the same “mainstream media” reason given. It is unclear if Lee’s public relations team eventually allowed InMedia to join.

During the question and answer session, only reporters from local and mainland Chinese media organisations were picked.

When Lee announced on Wednesday that he was resigning from his role as chief secretary, in which he was Hong Kong’s second in command, he did not take any questions.

Formerly the city’s security chief, Lee oversaw the police force’s response to the protests and unrest in 2019.

During the Saturday press conference, Lee – who began his career in public service as a police inspector and rose through the ranks in the Security Bureau – conceded that he lacked connections in other fields.

In response to a reporter’s question about not having business and political networks, Lee countered that not having these affiliations meant he had “no baggage,” and that the “most important thing as a chief executive is to be fair and just.”

He also said that his views on the Northern Metropolis – an ambitious development project proposed by the current administration – “are positive” and that he would consider anything that is “good and can bring prosperity to Hong Kong.” Introduced by Chief Executive Carrie Lam in the last policy address of her term, the plan aims to provide housing for 2.5 million people near the border with mainland China.

As part of the Beijing’s electoral overhaul to ensure that only “patriots” lead Hong Kong, chief executive election candidates are required to receive a minimum of 188 nominations from Election Committee members in order to run.

Tam Yiu-chung, director of Lee’s campaign team and Hong Kong’s delegate to China’s top legislative body, said on a Commercial Radio program on Saturday that he hoped the former chief secretary could get at least 500 nominations.

He said members of the team were writing up Lee’s political manifesto.

Former chief executive Leung Chun-ying expressed his support for Lee’s candidacy on Facebook, saying that Hong Kong’s future was “full of opportunities” thanks to the backing of the central government.