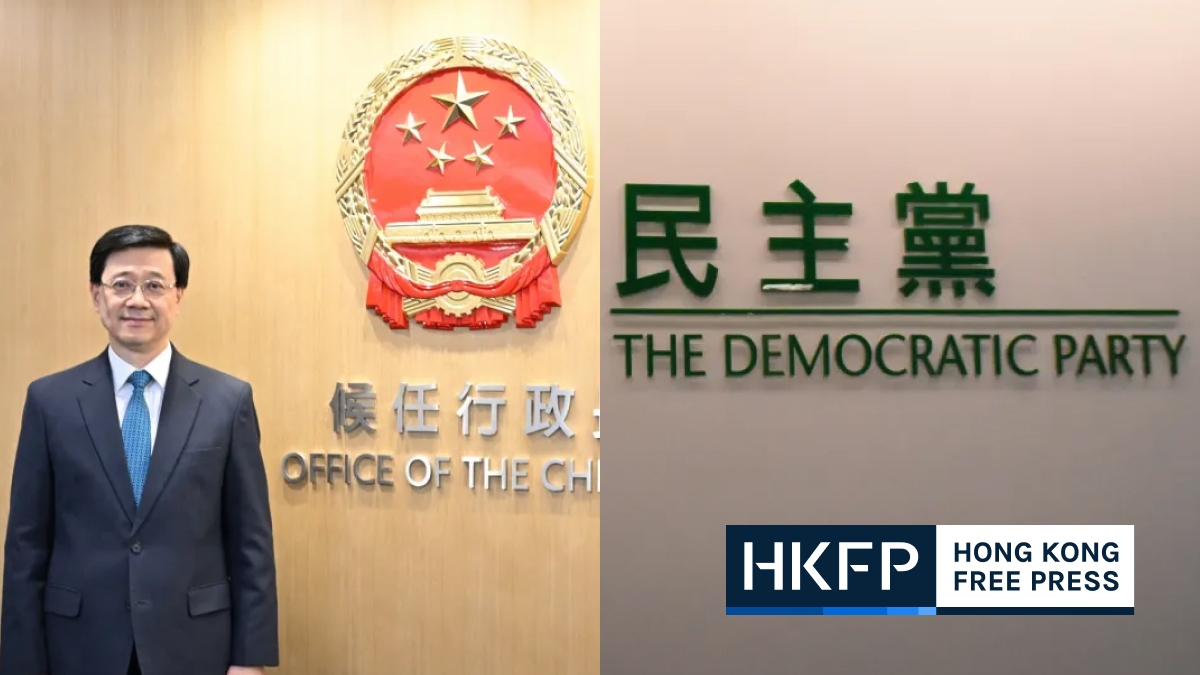 Hong Kong’s Democratic Party has urged Chief Executive-elect John Lee to rebuild relationships with the public, and in particular young people, by revoking the charges and sentences against those involved in the 2019 protests and unrest.

The 28-year-old pro-democracy group, which sent its suggestions to Lee’s office on Tuesday, said it was its “duty to the people of Hong Kong” to present its opinions, despite the “difficult social atmosphere nowadays.”

The Democratic Party is the city’s largest pro-democracy party, and held the second most number of seats behind the pro-Beijing DAB party in the three Legislative Council elections between 2008 and 2016.

But when four pro-democracy candidates were disqualified from the legislature in 2020, all incumbent Democratic Party lawmakers resigned in protest. In 2021, party representatives, including former chair Wu Chi-wai, were among those arrested under the national security law for participating in a primary election.

The Democratic Party did not participate in last December’s “patriots-only” legislative poll, which came after Beijing’s election overhaul that effectively barred opposition candidates from standing.

“We are holding on to the hope that down-to-earth observations and feelings, as well as rational analysis and suggestions, can still establish bonds in Hong Kong,” the party said in its letter to Lee.

The Democratic Party said Hong Kong’s next leader must ways to restore the interactions with the public, in particular the city’s youth, to rebuild trust.

“The new administration… cannot continue to rely solely on pro-establishment parties and organisations to assist its governance,” it added.

It advised Lee to implement universal suffrage for both the chief executive election and legislative poll, citing Hong Kong’s Basic Law, and listen to a wide spectrum of opinions for the proposed government restructuring.

In addition, the party said the next administration should clarify what was considered illegal under the national security law to reduce people’s doubts or concerns.

When addressing policies concerning younger residents, the Democratic Party said the government should consider revoking all charges related to the 2019 protests and unrest, as well as pardon those who had already been imprisoned.

“Otherwise, [the government] is suggesting to rebuild relationship on one hand and continuing to charge young people on the other. The administration’s determination to restore relations will not be convincing,” it said.

Protests erupted in June 2019 over a since-axed extradition bill. They escalated into sometimes violent displays of dissent against police behaviour, amid calls for democracy and anger over Beijing’s encroachment. Demonstrators demanded an independent probe into the police conduct, amnesty for those arrested and a halt to the characterisation of protests as “riots.”

The group also asked the upcoming administration to “respect the professionalism and autonomy in education,” and avoid interfering in learning.

Hong Kong’s next leader John Lee has not met with any figures from the pro-democracy camp since announcing his unopposed run for chief executive.

During visits to engage various pro-establishment parties while drafting his manifesto in April, Lee was asked by reporters if he would also be collecting the opinions of pro-democracy parties.

Lee said that he would consider listening to anyone’s views. “However, to be practical, as we only have a limited amount of time…[they] can express [their views] to us in written form,” he said.

HKFP has reached out to the Office of the Chief Executive-elect for comment.