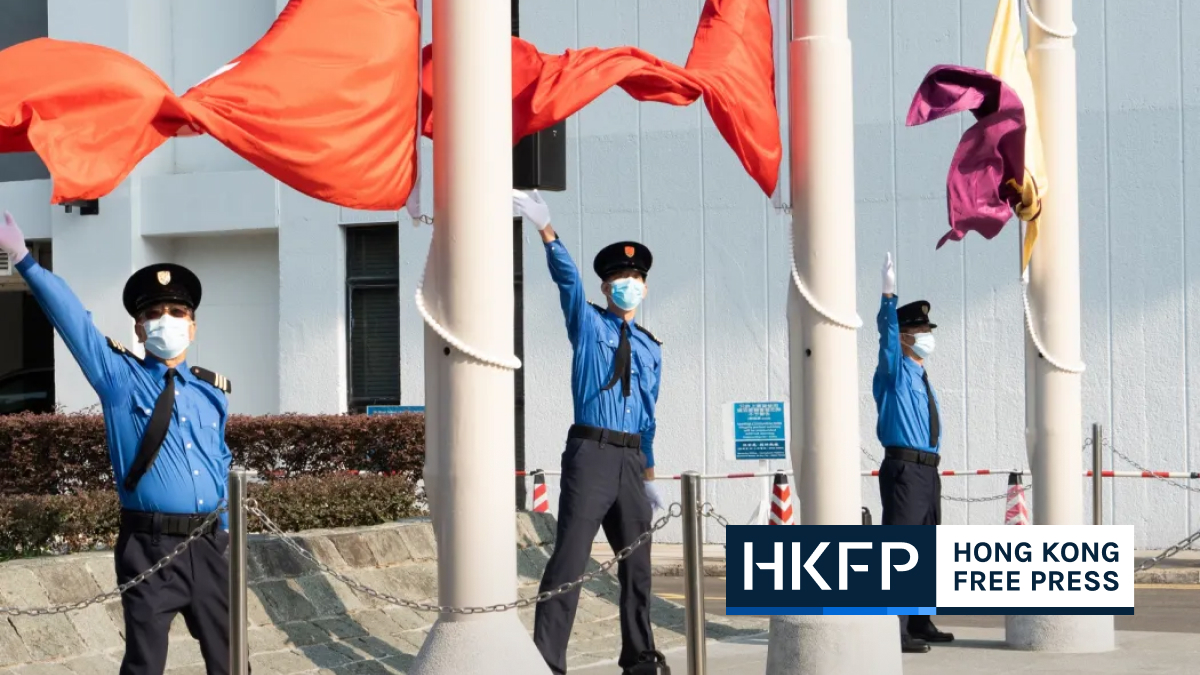 The Chinese University of Hong Kong (CUHK) has held its first weekly flag-raising ceremony “to promote national education” and enhance a sense of “national identity” among students, staff and alumni.

The event is part of a new Education Bureau ordinance that requires the city’s universities, secondary schools and primary schools to hold weekly flag-hoisting ceremony.”

Some of those present at CUHK’s Tuesday ceremony told HKFP that they were required to attend, while the university said that “all members attended the ceremony voluntarily.” The university declined to clarify the definition of “voluntarily.”

According to an internal university email seen by HKFP, college heads, deans of graduate schools and faculty deans were “requested to nominate members of your College / Faculty in a combination of students, staff and alumni to attend the ceremony.”

The email said that a flag-raising ceremony would be held every Monday morning of the academic calendar during term time, including the summer session, adding that the event aimed to “help students, staff and alumni develop a sense of belonging to the country, an affection for the Chinese people and enhance their sense of national identity.”

The first regular ceremony was postponed to Tuesday as Monday was a public holiday. About 50 attendees were present at the government-mandated event, which lasted for around 15 minutes. In the crowd were college heads, university staff and students, but not the university president Rocky Tuan.

When the ceremony ended, some staff clapped their hands and greeted each other.

One attendee, a PhD student who asked to go by AK, said he thought the ceremony was “meaningless” and “unnecessary.”

“Even when I have to stand here and watch them raising the national flag, I will still disagree with what I have always disagreed with – and vice versa,” he told HKFP. AK also claimed that he was required by his faculty to attend the event. “It is my [academic] duty… I have to fulfil a certain amount of hours,” he said.

He said the ceremony had occupied some of his studying time, but the attendance list would be renewed weekly so he did not have to attend the event again.

A group of mainland Chinese students also attended the event. Tom, a student from the group said he had voluntarily applied to join the ceremony as he wanted to witness the first time CUHK hoisted the national flag along with the school flag. The other three students were sent as student representatives by their faculties and colleges.

“I don’t think a flag-raising event could help with the patriotic education here,” Tom told HKFP, “but it has showed the attitude of CUHK. It’s a gesture, to show that it’s necessary for the school to work on patriotic education.”

Another mainland Chinese student, Cloudy, told HKFP that she thought the regular flag-raising ceremony was too frequent. “We have even more patriotic education back in the mainland, but it has kind of become a ritual too,” she said. The group suggested holding the flag-hoisting ceremony on holidays to make it more special.

In June 2020, Beijing inserted national security legislation directly into Hong Kong’s mini-constitution – bypassing the local legislature – following a year of pro-democracy protests and unrest. It criminalised subversion, secession, collusion with foreign forces and terrorist acts, which were broadly defined to include disruption to transport and other infrastructure. The move gave police sweeping new powers, alarming democrats, civil society groups and trade partners, as such laws have been used broadly to silence and punish dissidents in China. However, the authorities say it has restored stability and peace to the city.

The law also required schools to teach national security education, including regular flag-raising ceremonies and an emphasis on Chinese culture.

The Education Bureau also announced the release of the updated Primary Education Curriculum Guide last Thursday, which was launched on a pilot basis for use by schools in the current academic year, which began in early September.

According to the guide, the updated leaning goals for primary education include teaching students to understand their country and Chinese culture, and cultivate a sense of belonging and national identity towards through national education and national security education.

It also suggested that schools dedicate between 19 per cent and 25 per cent of the total lesson time to the task, allowing schools to promote diversified learning activities and strengthening students’ understanding of Chinese culture, the Constitution, the Basic Law and national security.

Throughout the Chinese version of the curriculum guide, the term “National Security” appeared 36 times, and “national education” 17 times.

The guide also mentioned the functions of holding flag-raising ceremonies “to deepen students’ sense of pride in being Chinese, to arouse their interest in traditional Chinese culture, customs and arts, and to enhance their knowledge of the country and national identity.”