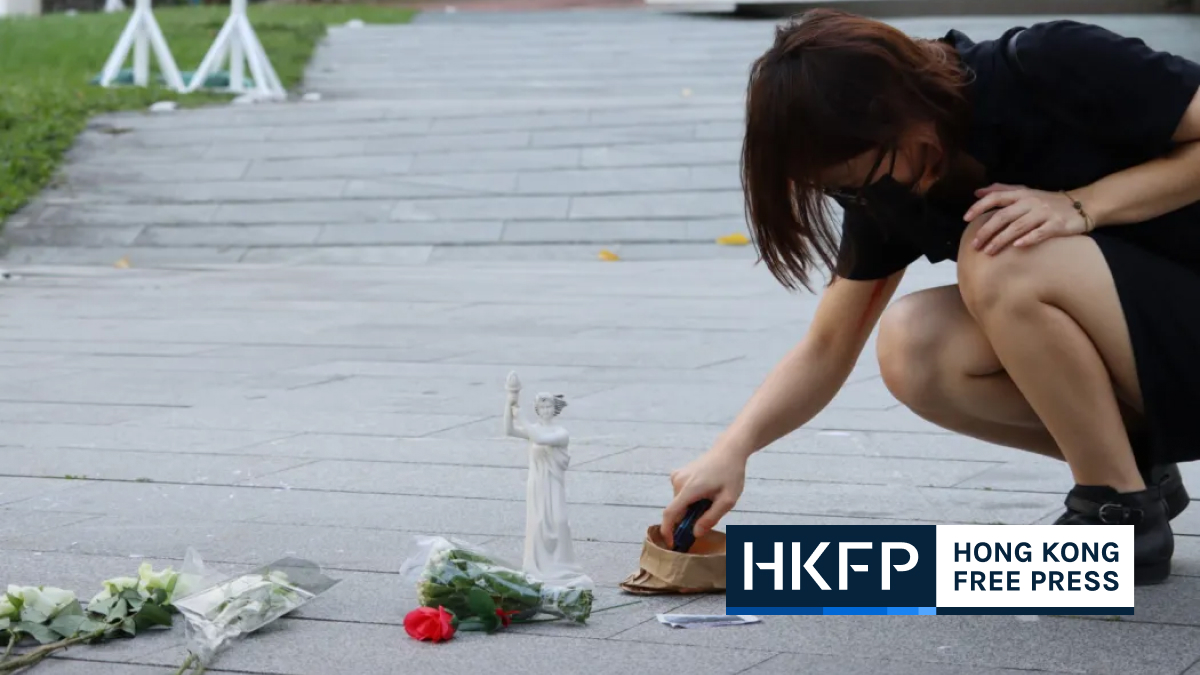 Students and a teacher at the Chinese University of Hong Kong (CUHK) have placed flowers, candles and a replica of the now-removed statue commemorating the Tiananmen crackdown on the spot where it once stood.

Saturday marks 33 years since the 1989 Tiananmen crackdown. However, this year, commemorative masses have been axed and police warned Hongkongers that they risk five years in prison if they illegally gather.

Last December, CUHK removed the Goddess of Democracy statue that once stood at near the entrance to its Tai Po campus. The statue was based on one erected by students in Tiananmen Square in 1989, before the military swept in, killing hundreds, perhaps thousands, of protesters.

In the early hours of Christmas Eve last year, CUHK removed the statue, a day after the University of Hong Kong removed the Pillar of Shame monument – another tribute to the 1989 dead.

On Saturday, Li – a final year CUHK theology undergraduate from mainland China – placed some white funeral flowers at the site of the now-removed statue. He told HKFP that he had bought the flowers when he was grocery shopping in Tai Po.

“I was worried about whether there would be police officers or security guards stopping me [from placing the flowers], ” Li said. “But when I came in and saw there were already flowers, I felt more relaxed – there are still like-minded people.”

Li said he was from Hubei and – although he knew there was a student movement in Tiananmen Square in 1989 – he was never told about the ensuing June 4 crackdown. It was only though dialogue, seminars and conversations with teaching staff at CUHK that he learned about the bloody incident.

“The more that I know… and when I want to act or express my defiance… it is unavoidable that there will be more worry in my heart,” Li said. But he added that these concerns were why “[we] have to fight for people’s freedom to not be threatened.”

Li said he will return to the mainland around a month after his course ends. He said he will continue to commemorate the 1989 crackdown on his own or in small groups.

Aside from flowers and candles, there was also a white miniature of the Goddess of Democracy placed on the spot where the statue once stood. It was left by Derek, a postgraduate philosophy student at CUHK.

The 25-year-old stood near the tiny statue and kept an eye on it for over three hours, HKFP observed.

The man, who wore a black t-shirt, mask and baseball cap told HKFP that the replica was gifted to him by a teacher in secondary school when they attended a Victoria Park vigil. He added that he wanted to stay at the campus to ensure the miniature was not taken away.

He said the removal of the original statue was “apparently the university’s fault,” adding that “we students cannot rectify the school – all I can do is to put [a replica] back here.”

Derek added that the monument was more than a tribute to the Tiananmen crackdown dead, as it was also “a symbol for freedom of speech at CUHK.”

From afternoon to dusk, the tributes were photographed by passers-by. Local media also reported that a history department teacher also visited the venue and placed white flowers.

Robert, a final year Chinese literature student from Armenia, also stopped by and captured the scene with his phone. He said he was “quite sad” when he saw the tributes, “especially the flowers.”

“The trauma people had in their hearts… it won’t disappear just by taking away the statue,” he said.

Robert said he came to Hong Kong to study in 2019 and he is about to leave this year. Witnessing what had happened on the campus in recent year, he said he “almost had a sense of guilt.”

He added that his generation has been struggling for democracy in Armenia for years and he has noted many similarities to China’s history.

From 4 to 8 p.m., HKFP noted three instances when police came near to the entrance of the campus and looked over to the former site of the statue.

One officer told HKFP that they were not responding to call, but were on a “normal patrol.”

During the third visit, a total of ten officers appeared near the exit of the campus wearing bulletproof vests.

Campus security also kept an eye on the area throughout the evening.