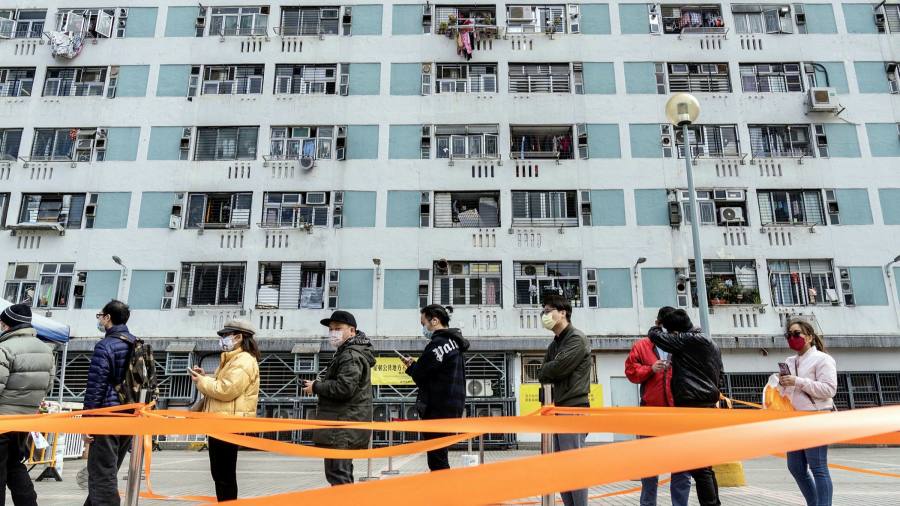 Hong Kong launched a new round of financial handouts as the city struggles to contain China’s biggest outbreak of coronavirus since the start of the pandemic, even as economists warned the city’s zero-Covid strategy was “unsustainable”.

Paul Chan, finance secretary, said the government would give spending vouchers of HK$10,000 (US$1,280) to 6.6mn adult residents, as the city reels from an outbreak of the Omicron coronavirus variant that has overwhelmed the healthcare system and government quarantine facilities.

The city has more than 8,000 isolation beds but more than 60,000 cases have been reported since January, including a record 8,674 on Wednesday, according to official data. Chan said the government would spend HK$54bn of its HK$170bn budget on anti-pandemic measures, including building new isolation facilities.

The subsidies, which will be given to permanent residents and some new immigrants, were announced a day after Hong Kong chief executive Carrie Lam said all 7.4mn residents would have to undergo mandatory testing next month as the government maintains its controversial zero-Covid strategy.

“Fighting the epidemic is our overriding mission,” Chan said in his annual budget speech, adding that the economy would grow between 2 per cent and 3.5 per cent in the first quarter of this year compared with the last three months of 2021.

Analysts believe the government’s economic projections are overly optimistic, with economists saying growth would slow in the first quarter, and that mandatory testing would affect labour productivity with those who test positive placed in isolation.

The latest financial support was unveiled after it was announced this week that stringent social-distancing measures — including a ban on dine-in services at restaurants after 6pm and the closure of some businesses — will last until at least April. The government on Wednesday announced a tightening of the restrictions, with masks now required during outdoor exercise and restaurant dining limited to two people rather than four.

Travel restrictions, which include mandatory quarantine for overseas arrivals of up to three weeks and flight bans to nine countries including the US and UK, have also made it increasingly difficult for global companies to operate in the city.

Hong Kong’s zero-Covid “approach is obviously unsustainable”, said Kevin Lai, chief economist for Asia excluding Japan at Daiwa Capital Markets. “You spend so much money on maintaining zero-Covid . . . and when the next wave of infections comes, you have to spend tens of billions again, sacrificing the city’s economy.”

Some analysts argued the government needed to consider the economic consequences of the tough measures.

“If a lockdown could reduce long-term costs for [containing the virus] or even [revive] some economic activities . . . it might be worth doing that to cut our losses,” said Iris Pang, chief economist for Greater China at ING.

Chan said the deficit would rise to HK$56bn for 2022-23, accounting for 1.9 per cent of gross domestic product, but he was confident that fiscal reserves would return to more than HK$1tn within the next five years from HK$950bn.

A deputy minister was among those who tested positive for Covid on Wednesday.