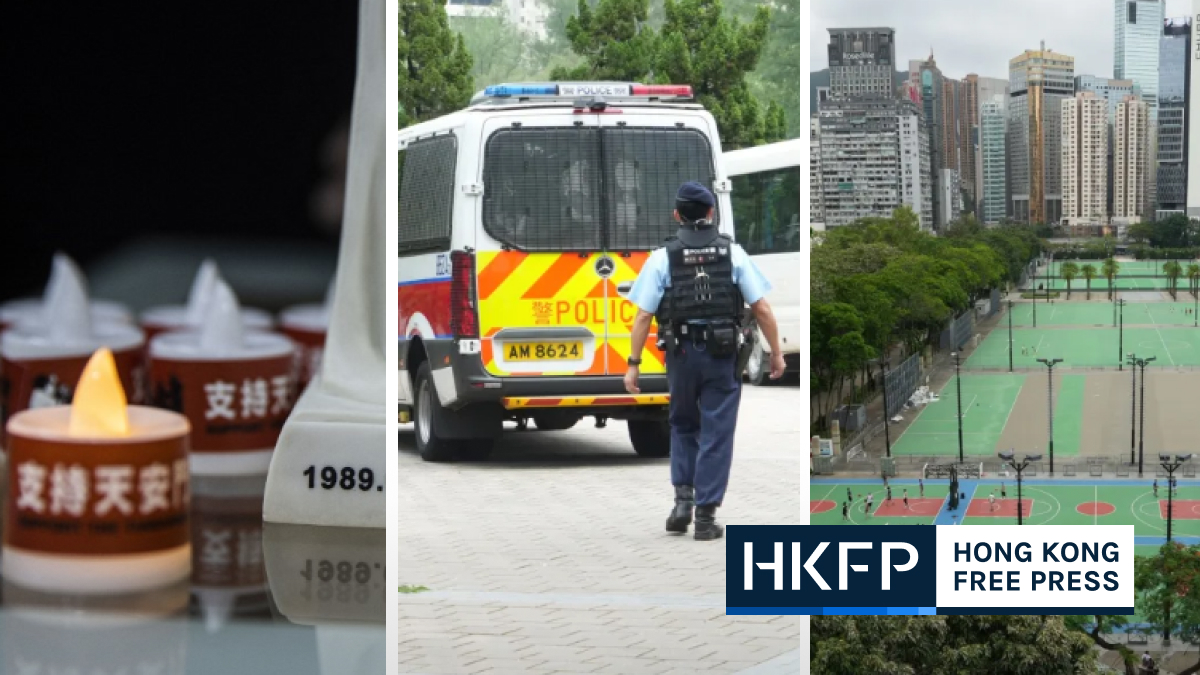 The Hong Kong government has announced it will temporarily shut down parts of Victoria Park, a day before the 33rd anniversary of the 1989 Tiananmen crackdown. Citing online calls that “incited” unauthorised assemblies on Saturday, the authorities said the closure was to ensure public order and prevent the spread of Covid-19.

The park in Causeway Bay has traditionally been the site of commemorative candlelit vigils.

The Leisure and Cultural Services Department (LCSD) said on Friday that the football pitches, basketball courts and central lawn at Victoria Park will be sealed off from 11 p.m. on Friday until 12.30 a.m. on Sunday. Some entrances will also be closed, while the public will not being able to use the fitness station and the jogging lane during that period.

It marked the second consecutive year that the Hong Kong authorities blocked access to the recreational venue in Causeway Bay on June 4. For more than three decades, thousands would attend a mass vigil for the victims of Beijing’s crackdown on a student-led democracy movement in June 1989.

The temporary shutdown announcement came a day after police warned citizens not to join gatherings on June 4, saying there were online posts that appeared to “incite” others to take part in an unauthorised assembly on Saturday.

On Friday, the LCSD citied police in stating that some people were using various channels to “incite the participation of unauthorised assemblies in the Victoria Park and its vicinity.”

It is unclear what public messages the authorities are referring to. Most online calls for commemorations of the 1989 crackdown appear to be related to overseas events, rather than calls to gather in Victoria Park.

“[It] may involve the use of the venue for illegal activities…” a spokesperson for the LCSD said, adding the decision was made to prevent public safety and public order from being affected, well as well to avoid the chance of spreading Covid-19.

An HKFP journalist was stopped by police and had their details recorded when reporting around Causeway Bay on Friday. When asked why they were stopped, an officer said they were told to take down such details as Saturday is June 4.

The football pitches in the park – where the annual vigil was held – are fully booked for June 4, according to the park’s timetable. Two of them have been closed since mid-May for maintenance work, and will only reopen to the public on June 16. The LCSD said people who rented the venue facilities would be informed of the closure arrangements.

When asked by HKFP why the maintenance was not carried out during Covid-19 shutdowns earlier in the year, the department said that re-surfacing of six soccer pitches had been underway since April 1.

“When planning the re-surfacing works of hardsurfaced soccer pitches at Victoria Park, the venue management has taken a number of factors into account including the schedule of mega events to be staged in the Park, the lead time for preparation work, impact on members of the public, the pandemic situation, etc…” a spokesperson said on Thursday.

Hongkongers had openly mourned the people who died in the crackdown for more than 30 years. But the city’s annual vigil, organised by the now-defunct Hong Kong Alliance in Support of Patriotic Democratic Movements of China, were banned by the police in 2020 and 2021 citing public health concerns amid the Covid-19 pandemic.

On June 4 last year, Victoria Park was empty for the first time in 32 years after police invoked section 17 of the Public Order Ordinance to seal off the central lawn, football pitches and basketball courts at the recreation venue. Hundreds of citizens, many dressed in black, roamed the streets around the park holding electronic candles or their mobile phones with the flashlight turned on.

The commemoration of the crackdown is expected to be muted this year, with former leaders of the alliance Lee Cheuk-yan, Albert Ho and Chow Hang-tung now behind bars for organising or participating in an unauthorised assembly. The three activists and the dissolved Alliance are also facing trial under the Beijing-imposed national security law for allegedly inciting subversion.

Senior Superintendent Liauw Ka-kei toid reporters on Thursday that it would not be an issue for citizens to “walk on the street, have meals and go to the cinema” on Saturday. Asked whether lighting up a candle at home was illegal, Liauw said he “could not see what laws it would violate,” adding there was no need to “over-speculate.”

Activists in countries including the US, the UK, Canada, Australia, Japan, Germany and France are set to hold gatherings to remember the crackdown. A full-scale replica of a eight-metre-tall Tiananmen statue – the Pillar of Shame – was also unveiled at Norway’s University of Oslo last week, after the original sculpture by Jens Galschiot was torn down and removed from the University of Hong Kong last December.