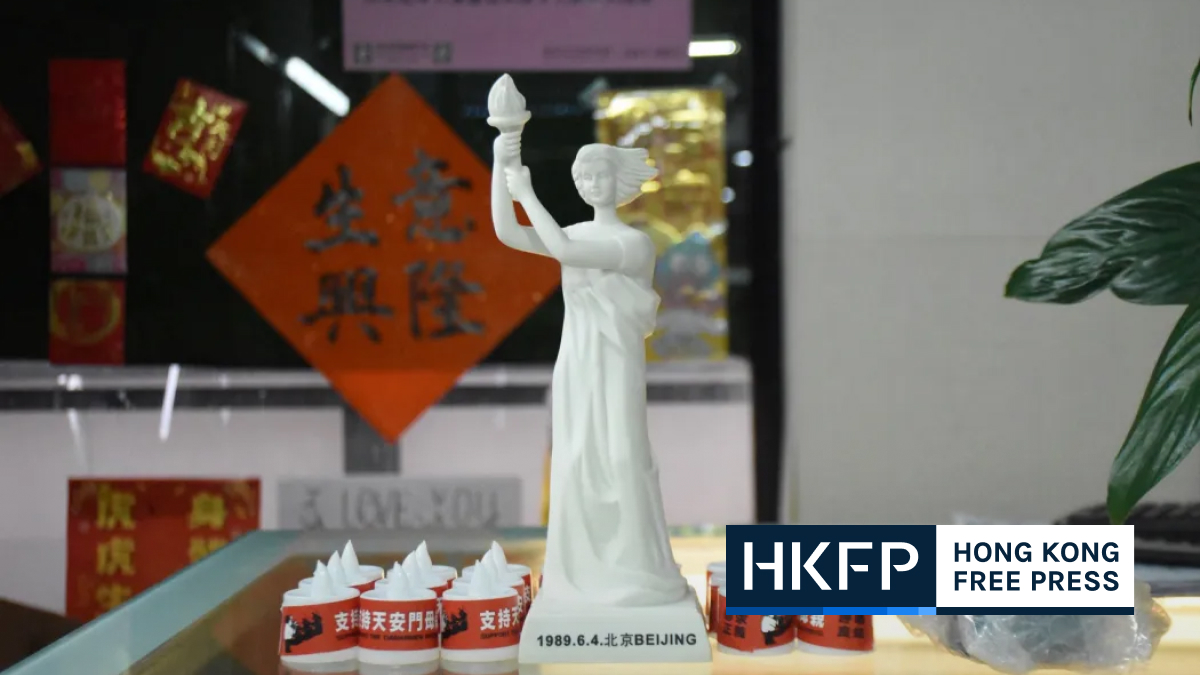 A former district councillor has distributed electric candles to commemorate the 33rd anniversary of the Tiananmen crackdown, as the city saw a heavy police deployment.

From his shop in Mong Kok, Chu Kong-wai prepared four boxes of white electric candles wrapped in red paper with the words “support the Tiananmen mothers.”

Chu told HKFP that around 100 candles had been given out by Saturday evening.

During HKFP’s 30-minute-long stay at Chu’s store, three people bought goods and collected candles. Chu also put out a miniature Goddess of Democracy figurine, the full-size statue of which was taken down from the Chinese University of Hong Kong last December.

Mrs Chan, a former reporter, told HKFP that she had come specifically to get a candle after reading about them on Facebook post and in local media reports.

“Sometimes commemoration does not mean going out and ‘sacrificing oneself,’ doing it at home can be the same,” said Chan.

Chu said he decided to give out candles in his store instead of on the streets after considering the risks for those wanting to take candles.

“After I was elected as a district councillor, I distributed candles in Mong Kok… for me, I have a huge emotional attachment,” said Chu.

“Although at one point, I felt these acts of ceremony were boring and repetitive, now at times of a low ebb, I felt these are specially important,” said the former district councillor.

Chu also said that he thought about the risks before deciding to continue giving out electric candles this year. In previous years, Hongkongers would gather at Victoria Park in Causeway Bay to honour those who died on June 4, 1989, when the People’s Liberation Army cracked down on protesters in Beijing.

However, the vigil was banned in 2020 and last year, on Covid-related grounds. A number of prominent veteran activists, such as Lee Cheuk-yan, Albert Ho and Chow Hang-tung, have been jailed for organising or taking part in an unauthorised assembly.

This year, Victoria Park’s football pitches were closed “for maintenance” or fully booked by residents, as police shut down the park on Friday and warned Hongkongers not to gather.

“It’s not a calculation, because there is no way for you to know whether you have stepped on shit,” Chu said.

“It’s more of a question to yourself: of what sort of danger you cannot bear… For example, if some police officer come up now and say ‘we will arrest you if you do not close down,’ then I will close down.”

“I will not choose a definite imprisonment for this act of remembrance, but if you say there is a possibility, and I am not in immediate danger, I will still continue to do so,” said Chu.

An HKFP reporter also saw at least three people dressed in black being stopped by the police on two separate occasions, with one man surrounded by around a dozen officers at one point.

When asked about the legality of public commemorations of the Tiananmen crackdown, Chief Executive Carrie Lam did not say whether they would be in violation of the Beijing-imposed national security law, but said that public gatherings must comply with the sweeping legislation, as well as Covid-19 social-distancing rules.