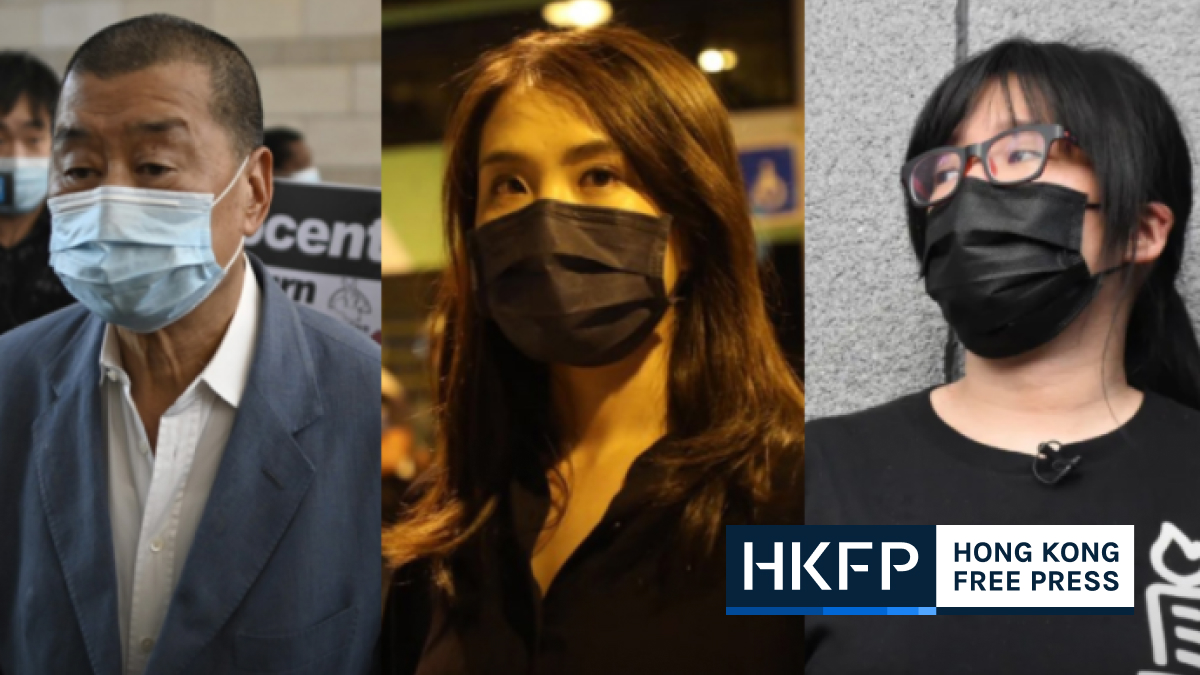 Lai, along with barrister and vice-chairperson of the now-defunct Hong Kong Alliance in Support of Patriotic Democratic Movements of China Chow Hang-tung, as well as activist Gwyneth Ho appeared in the District Court in front of Judge Amanda Woodcock on Thursday.

The trio were the only defendants who pleaded not guilty to the charges and went through trial. A total of 24 people were brought to the court, 16 of those who pleaded guilty had already been sentenced.

The founder of the now-defunct pro-democracy Apple Daily newspaper was already serving jail sentences over other charges and awaiting trial under the security law. Lai was convicted of inciting others to knowingly participate in an unauthorised assembly.

Chow was found guilty of inciting others to take part in the banned vigil, while Ho was convicted of knowingly taking part in the unauthorised assembly.

The commemorative vigil – which, for years, saw thousands pour into Victoria Park to remember the 1989 dead, was banned last year by the police citing Covid-19 health concerns. The defendants challenged the validity of the police ban in court, but the prosecution argued that they were not entitled to do so.

Close to 100 people, including family members of the defendants and former employees of Apple Daily, queued up inside the court building at least an hour before the court session was set to begin.

The representative for the 74-year-old media mogul argued during trial that his conviction would infringe upon his rights of freedom of assembly and of speech. Meanwhile, activist Ho argued during her testimony that she was there not to mourn the victims, but to show resistance to the police prohibition of the event.

The former vice-chair of the Alliance never asked the public to attend the commemoration Causeway Bay, Chow’s representative argued in court, adding that the barrister and other members of the Alliance entered the park that evening under “their own personal capacity.”

Hong Kong was one of the last remaining territories in China where the Tiananmen Massacre was openly mourned, until last year, when authorities banned the gathering.

The Tiananmen Massacre occurred on June 4, 1989 ending months of student-led demonstrations in China. It is estimated that hundreds, perhaps thousands, of people died when the People’s Liberation Army was deployed to crack down on protesters in Beijing.

The Alliance, as the organiser of the annual vigils, also faced increasing pressure from the government, and members voted to disband the group in September.

The judge read out a summary of her judgement in court. According to the written judgement, when Lai arrived at Water Fountain Plaza outside Victoria Park “to support Hong Kong Alliance,” he gave his “support to their aim and that was, in my findings, to hold an unauthorised assembly despite the police ban and incite others to join them.”

“His presence at that press conference was a deliberate act to rally support for and publicly spotlight the unauthorised assembly that followed. He need not use words of incitement to intend to incite others,” the reason for verdict read.

As for the case against Chow, aside from her handing out candles that evening, Woodcock wrote that the barrister’s Facebook post “clearly makes reference to those that will definitely join her in Victoria Park that night.”

“She does not specifically appeal or invite people to join her but implicitly that intention is there. She signs off with ‘see you tonight,’” the judgement read.

Woodcock also ruled that Chow’s evidence was “a weak attempt to deflect the truth and intention to publicly and openly defy the police ban. The undisputed and admitted evidence does not support her attempt to try and contradict or misrepresent it.”

For Chow and Ho’s participation charge, the judge wrote that she rejected their evidence as “frankly nonsensical.”

“They were both at times evasive and abstruse for the purposes of being provocative and argumentative. I repeat, even the admitted facts do not support the evidence given by either defendant. Their evidence was a poor attempt to either negate or repudiate evidence that was overwhelming and undisputed,” Woodcock wrote.

As for the constitutional challenges brought up by the defendants, the judge said that she was “bound by precedent and there were no grounds for a constitutional systemic challenge.”

While the defendants challenged the validity of the police ban during trial, the judge ruled that it was not “open to the defendants to challenge to the merits of the decision during the trial.”

“Firstly, the issue should have been resolved by the Appeal Board according to the statutory mechanism for aggrieved parties and then a Judicial Review,” the judge wrote. “However, I will add that even if it was relevant and I should consider the merits of the decision then I would, without hesitation, rule against the defence.”

Woodcock wrote that the advice and recommendation given by the Department of Health to the police “was very clear.”

She wrote that she “would have given weight” to the testimony of the department’s medical expert, Chen Hong in court that “even if all possible precautionary measures were implemented in Victoria Park during a public meeting of between 50,000 and 100,000 people, she would still be of the same professional opinion that a mass gathering of that nature of which she had had prior personal experience, would be a risk to public health at that material time.”

On Thursday, people in the public gallery stood up and waved, some shouted “happy birthday” to Lai, who turned 74 this week. The media tycoon was wearing a dark suit and white shirt, while both Chow and Ho were sporting pony tails. The barrister was in a black blazer, while Ho wore a pink blouse covered by a dark suit jacket.

A child sitting in the public gallery said to Chow “big sister I have come specifically to get to know you, we didn’t know each other before.” Chow laughed after hearing the young girl.

Outside the court building, close to a dozen uniformed and plain clothes police officers were on standby.

Veteran protester “Grandma Wong” was holding her signature yellow umbrella and a sign that reads “release all political prisoners immediately.” She was also draped in a Union Jack flag, and shouted slogans including “democracy will prevail,” “vindicate June 4th,” and “there are no rioters, only tyranny.”