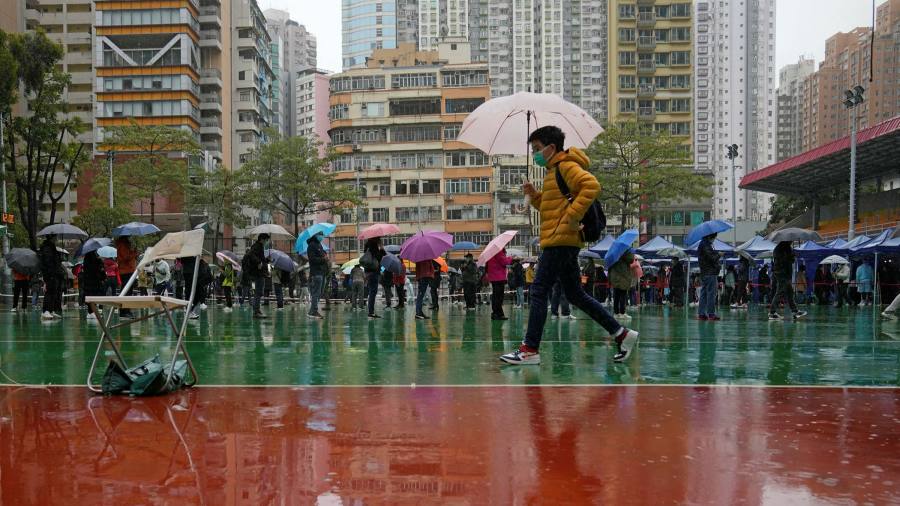 Hong Kong announced on Tuesday that all residents would have to undergo mandatory Covid-19 testing from next month, as the city reels from China’s worst outbreak since the start of the pandemic.

Carrie Lam, Hong Kong’s chief executive, announced the latest measures as experts warned that more than a third of residents will be in isolation within weeks and more than half will have had Covid by April unless containment policies were strengthened.

The government has been ordered by Chinese president Xi Jinping to adhere to Beijing’s “zero-Covid” policy, which requires local authorities to isolate infected patients — even if they have only mild symptoms or are asymptomatic — as well as close contacts.

“No matter what different political views you have, in the battle between humans and the virus . . . the most important thing is human lives,” Zhong Nanshan, one of China’s top medical advisers, said in a video released late on Monday night.

But health experts have warned that the city’s hospitals and quarantine facilities will soon be overwhelmed. Hong Kong has more than 8,000 isolation beds and is racing to complete facilities to provide another at least 40,000.

New daily Covid cases will peak at almost 183,000 in March and total cumulative infections could hit 4.5mn in the city of 7.4mn in April, according to research published by the University of Hong Kong (HKU) on Tuesday.

At the peak of the Omicron coronavirus outbreak, the number of people in isolation at the same time could reach 2.5mn, comprising 625,000 infected individuals and 1.9mn close contacts. The researchers forecast that total deaths from the pandemic could hit 3,200 by mid-May, up from the 350 that have died since the virus first emerged in Wuhan in early 2020.

“In the absence of much more intensive [restrictions], akin to a ‘lockdown’, the trajectory of the fifth wave is unlikely to change substantially from its current course,” the HKU researchers said.

Hong Kong had recorded relatively few infections or deaths for most of the pandemic. But the territory is now being pummelled by the Omicron coronavirus variant, logging more than 53,000 new infections since January. Many health experts warn that the actual number could be many times higher because of a testing backlog.

Authorities have imposed the toughest restrictions since the start of the pandemic to deal with the worst outbreak in China, making it increasingly difficult for global companies to operate in the financial centre. Tens of thousands of residents have left Hong Kong over the past month to escape the latest wave of infections.

“Hong Kong’s outbreak is of a scale that has not been seen in any city in [China],” said Leung Chi-chiu, a respiratory diseases expert. “We have to look at the challenges and adjust our containment measures accordingly . . . We need to use whatever way [we can] to slow down the spread of the virus.”

Gabriel Leung, dean of medicine at HKU who headed the research team and is a government pandemic adviser, said more stringent restrictions, including a lockdown, should be considered.

“We know that it is difficult to carry out a Wuhan-style lockdown, which is not feasible in Hong Kong,” Leung said. “But a lockdown [here] could be in the form of only allowing people to go out for work, shopping [for] groceries weekly or for critical reasons.”

Lam said residents would be tested three times but reiterated that she did not intend to impose a total lockdown on the city.

She also announced that the summer break for schools would be brought forward to March 4. Classes could resume in mid-April following the Easter break, in the hope that the worst of the latest wave had passed.