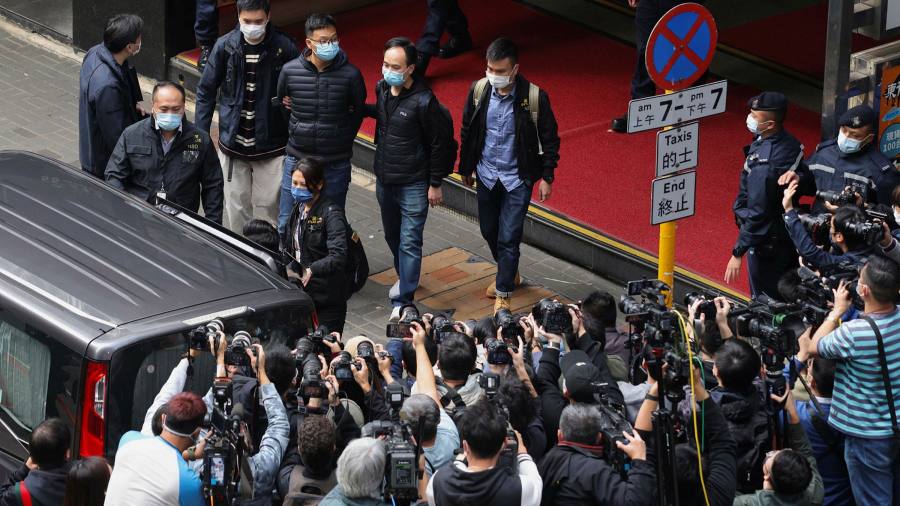 Hong Kong and Chinese authorities have hit back at international condemnation of a police raid on Stand News, after the pro-democracy media outlet was forced to closed and seven individuals were arrested.

“We call on [the People’s Republic of China] and Hong Kong authorities to cease targeting Hong Kong’s free and independent media and to immediately release those journalists and media executives who have been unjustly detained and charged,” he said.

“Freedom of expression, including media freedom, and access to information provided by an independent media are critical to prosperous and secure societies. These freedoms enabled Hong Kong to flourish as a global centre for finance, trade, education and culture.”

The comments drew a stern response from Hong Kong and Chinese authorities.

Carrie Lam, Hong Kong’s chief executive, insisted that the arrests had “nothing to do with so-called suppression of press freedom”.

Zhao Lijian, a spokesperson for China’s foreign ministry, accused the US of “hypocritical double standards”, saying “freedom of the press and freedom of expression cannot be used as a shield for criminal acts”.

“No country or organisation, as well as individuals, has the right to interfere in Hong Kong affairs,” he added.

Deeply concerned by the closure of Stand News and related arrests in Hong Kong. A confident government that is unafraid of the truth embraces a free press. We call on the Hong Kong authorities to stop targeting the independent media and release those unjustly detained.

Hundreds of police raided Stand News on Wednesday and arrested seven individuals, including the acting chief editor and former executives, on suspicion of “conspiracy to publish seditious publication” under the city’s British colonial-era laws.

Police accused the outlet of “inciting hatred” against the government through news reports involving interviews with pro-democracy figures and articles penned by activists.

The site, which was founded in 2014, said it would cease operations after HK$61m (US$8m) of its assets were frozen by authorities under a sweeping national security law imposed by Beijing in response to the citywide 2019 pro-democracy protests.

The arrested individuals included Denise Ho, a well-known Hong Kong singer and activist who is a Canadian citizen, and the barrister and former lawmaker Margaret Ng, both of whom are former board members of Stand News.

Ho and Ng were granted police bail and released from custody on Thursday.

Mélanie Joly, Canada’s foreign minister, said she was “deeply concerned by the arrests”, adding the country would “continue to speak out and denounce violations of these freedoms, in partnership with our international allies”.

Peter Stano, an EU external affairs spokesperson, said press freedom was guaranteed under the one country, two systems model that allowed Hong Kong a high degree of autonomy from Beijing for 50 years following the handover from British to Chinese sovereignty in 1997.

Pressure has been increasing on media seen as critical of the government and Beijing. Apple Daily, the pro-democracy newspaper, was forced to shut six months ago after its assets were frozen and founder Jimmy Lai and senior journalists were arrested.

Foreign reporters have been denied visa applications to work in the city and officials are considering a “fake news” law.

More than 70 per cent of respondents to a survey by the Foreign Correspondents’ Club of Hong Kong said they were concerned about being arrested or prosecuted by authorities for their journalism.

A Stand News journalist told the Financial Times that he felt “angry and sad” about the police raid and the forced closure and recalled that his colleagues were barred from filming the raid or using their electronic devices.

“We were doing serious journalism without any other intentions,” he said.