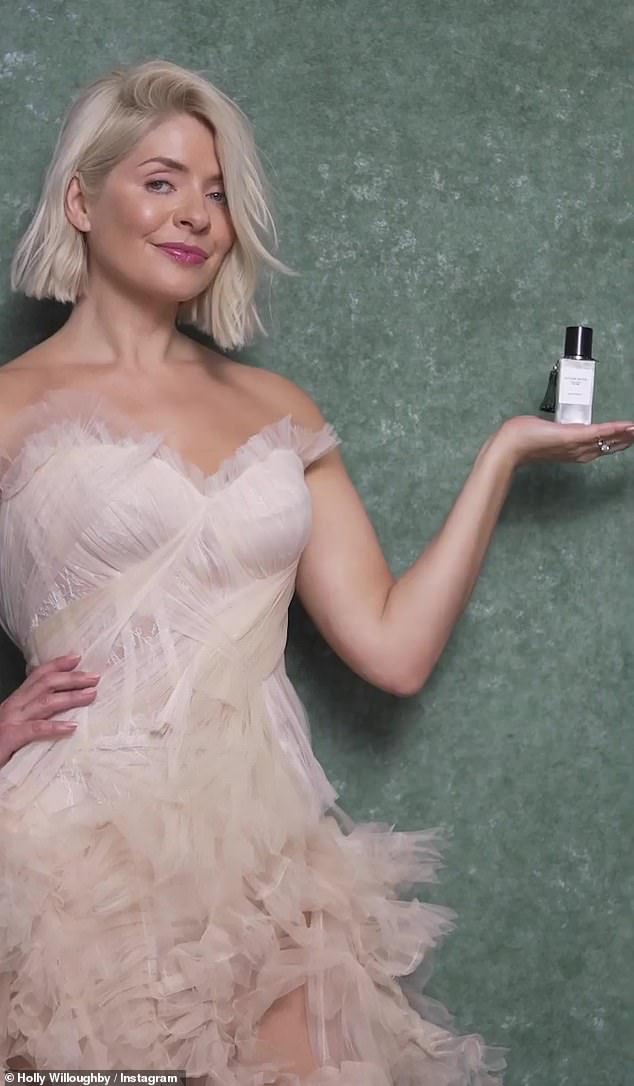 Holly Willoughby cut a glamorous figure while promoting her very first fragrance in a stunning photo shoot on Monday.

The TV presenter, 40, donned a figure-hugging white dress with a sweetheart neckline and sheer ruffle detail.

The garment also featured ruched decoration as Holly styled her locks into a bob for the shoot.

Wow: Holly Willoughby cut a glamorous figure in a sheer white dress as she promoted her very first perfume in a stunning photoshoot on Monday

The star accentuated her beauty with a light palette of makeup as she showed off her first perfume.

The product is part of Holly’s Wylde Moon lifestyle brand which she launched in September last year.

Alongside the clip, she wrote: ‘Tomorrow! My very first perfume…Discover a perfume to energize and animate your senses… 8am @wyldemoon 08.02.22 #borrowedfromthewild’.

Fragrance: The product is part of the Holly’s Wylde Moon lifestyle brand which she launched in September last year.

Explaining her hopes for her new website, Holly wrote for the launch: “I want WYLDE MOON to be a place where I can share the things I love, the lessons I’ve learned, the things I see and that I want to share instantly”. with the others.’

Holly’s latest newsletter for the site sees the star sharing her tips for “looking within” during a January retreat.

‘This month’s edition is all about creating little moments for yourself, whether it’s walking the dog; soak in the tub; read a book; meditate or listen to a podcast,” writes the mom of three.

“And let’s not forget, in this lunar month that straddles Valentine’s Day, love, and especially self-love, is paramount.”

Wow: Holly shared a behind-the-scenes look at the photoshoot on Sunday

It’s been a busy week for the star as she presented This Morning without her regular co-presenter Phillip Schofield, who is still in self-isolation with Covid.

Phil made a virtual appearance on Monday’s This Morning after revealing he had tested positive for the seventh day in a row.

Chatting with hosts Holly and Alison Hammond from her stylish home, Phillip, 59, shared: ‘I’m perfectly fine. A week ago I had a mild sore throat for an hour. I made my way through the boxes.

He added: “I cooked. I sat in the garden because the sun came out. I’m bored to death.

On screen: It’s been a busy week for the star as she presents This Morning without her regular co-presenter Phillip Schofield, who is still isolated with Covid

Phillip, who first announced he tested positive for the virus on January 31, continued: “I cleaned every closet, every surface, everything.”

He then turned his attention to Sunday night’s Dancing On Ice – which he was unable to host alongside Holly due to her positive test.

Of the show, which Holly hosted alongside stand-in presenter Stephen Mulhern, Phillip said, “By the way, Holly, that was really weird.” It was so weird to watch. I sat down with a gin and tonic.

Stephen was confirmed as Phillip’s replacement on Saturday with a statement from ITV reading: “This Sunday’s episode of Dancing on Ice will be hosted by Holly Willoughby and Stephen Mulhern as Phillip Schofield continues to self-isolate.”

Cheers: Phillip tuned in to watch Dancing On Ice on Sunday (Holly and Stephen Mulhern are pictured)