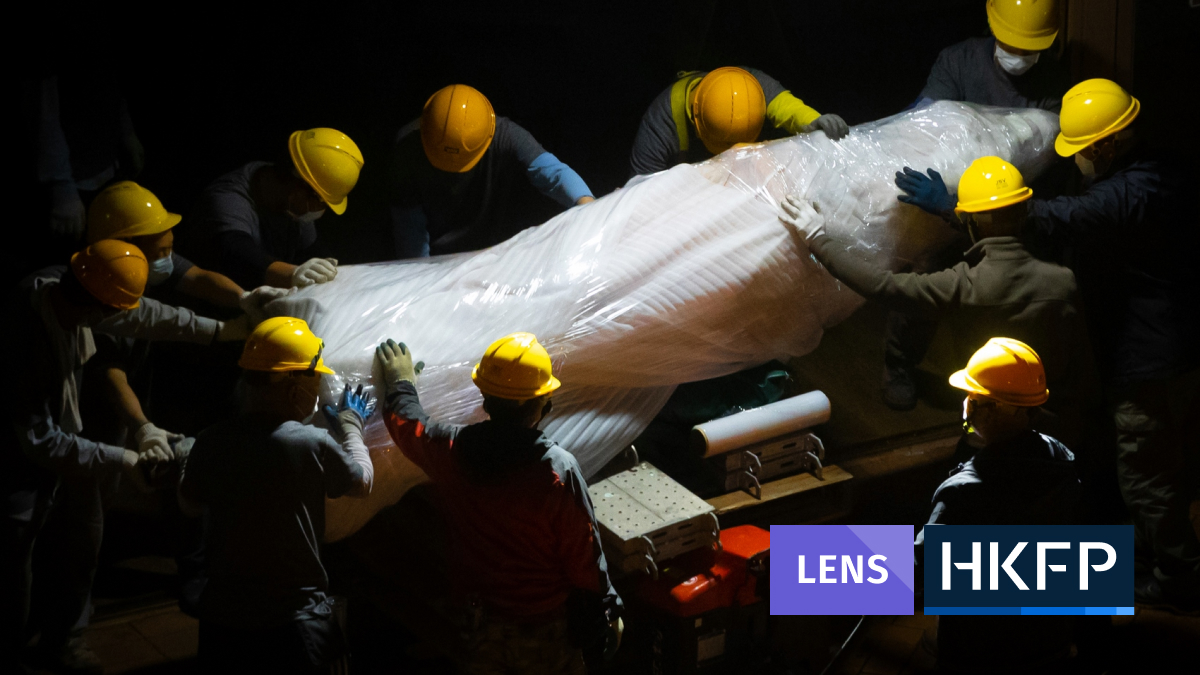 The Hong Kong Press Photographers Association (HKPPA) announced the winners of its annual Focus at the Frontline news photo contest on Sunday.

HK01 photojournalist Liu Ngan Hung won the Photo of the Year award for his picture of workers removing the Pillar of Shame – a statue that honoured those who died when the People’s Liberation Army cracked down on protesters in Beijing on June 4, 1989.

The monument stood at the University of Hong Kong for more than 20 years until it was removed in the early hours of December 23. The photograph also won the Spot News category.

The HKPPA said the image “symbolises the freedoms of thought and expression once cherished in Hong Kong being dispossessed.”

Photo of the Year

The 28-year-old photo competition is the city’s largest news photo contest. It aims to “showcase images with news and artistic values,” and recognise the hard work of photojournalists, according to the HKPPA, which received 949 photographs and 75 photo series from 82 contestants for this year’s awards.

Lam Oi Yee of Ming Pao came second in the Spot News category with an image showing people drinking on a street, metres away from a fatal car accident.

The second runner-up and two of the three honourable mentions in the Spot News category went to photographs taken on the 24th anniversary of the city’s handover, when a man stabbed a police officer in Causeway Bay and then took his own life.

Freelance photographer Leung Man Hei took the first prize in the General News category with a picture of a young Hongkonger bidding farewell to loved ones at the airport before departing the city for a new life in Canada.

The second prize was won by Reuters’ Tyrone Siu, who took a photo of children playing with a mock gun at a model MTR station at a Hong Kong Police College open day on April 15, 2021, which is also National Security Education Day.

Freelance photographer Louise Delmotte was third in the category with an image featuring China’s leader Xi Jinping on a screen at Hong Kong’s Tamar Park. He was making a speech to mark the centenary of the Chinese Communist Party.

Chan Kit-san, who worked for the defunct online media outlet Stand News, came in first in the Portrait category for his shot of Chow Hang-tung, a former leader of the organisation behind Hong Kong’s annual Tiananmen Crackdown vigils, which also disbanded last year. Chow is currently serving a 15-month jail term over the banned 2021 Tiananmen vigil.

The HKPPA awarded Ha Ka-Long, another Stand News photographer, for his photo of Luke Ching, an artist and labour rights activist who protests for low-paid MTR Corporation contractors.

The first prize in the Feature category went to Li Chi-wa at China News Service for his picture of pro-democracy singers Anthony Wong and Denise Ho. Wong was waiting for Ho to be released on police bail after being arrested in the Stand News case.

Ming Pao’s Tang Chung-wang was the first-runner-up in the Feature category. His photo showcased a pile of shredded paper in the headquarters of Apple Daily at the newspaper’s last night of operation.

Ming Pao photographer Yeung Pak Yin was awarded the first prize in the Sports category. His photo captured Edgar Cheung’s victory after beating world’s highest ranked fencer in the  round of 16 match of the Tokyo Olympics.