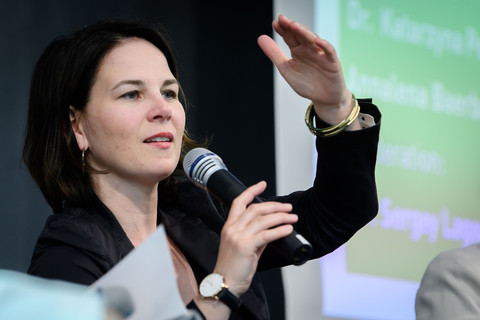 Germany’s foreign minister will boycott Beijing’s Winter Olympics on human-rights grounds, but the EU has a “cognitive split” on China, it said.

Neither the EU nor Germany have decided whether to formally snub China’s Olympic Games in February, German foreign minister Annalena Baerbock told the DPA news agency on Wednesday (29 December).

“But I definitely won’t be going to the Olympics at this time,” she added, in a personal decision.

The European Parliament was also right to be pushing for an EU import ban on goods produced using forced labour, she added, alluding to China’s well-documented exploitation of its Uighur minority.

“The European Parliament’s proposal to ban the import of goods produced with forced labor is, in my view, exactly right,” Baerbock said.

And the EU foreign service, also on Thursday, criticised China for its ongoing assault on Hong Kong’s democracy in violation of international treaties.

“The [Chinese] raid against Stand News [an independent media] … and the arrest of seven people mark a further deterioration in press freedom in Hong Kong,” an EU spokesman tweeted.

But for their part, other German politicians have indicated they want to mend ties with Beijing instead of defending EU values.

Scholz also said he hoped a new China-EU Investment Agreement “will take effect as soon as possible”, even though the EU Parliament has blocked this because China blacklisted dozens of MEPs and EU officials in a sanctions dispute.

“I’m very much confident in the value-based realism, which is represented by Olaf Scholz and the German government,” former German defence minister Rudolf Scharping also said in an interview with a Chinese state mouthpiece, the CGTN TV broadcaster.

For their part, France and Austria have indicated they would not support any EU-level Olympics boycott.

And Hungary, which has in the past vetoed critical EU statements on China, said the same.

“We maintain an open attitude toward China, focusing on issues that bring us together, instead of those pulling us apart,” Hungary’s ambassador to China, Máté Pesti, told another state mouthpiece, the Global Times, also this week.

“The only sentence that we should echo during the upcoming Olympic Games is “Team Hungary, Jiayou [Go for it]!”, he added.

When it comes to Lithuania, the EU Commission has also indicated it does not want to get involved despite Vilnius’ calls for European solidarity.

“So far, there has been no consistent, clear Chinese action. Most of the pressure measures are ‘under the table’, and it is very difficult to record them and say that the state has contributed to them,” Lithuania’s EU commissioner, Virginijus Sinkevičius, said on Wednesday.

“Isn’t over a thousand containers sitting in ports evidence? Isn’t the decrease in flows evidence? Isn’t the non-fulfilment of contracts evidence? All of this has been documented, and companies have sent it to our Foreign Ministry,” Rimas Varkulevičius, the president of the Lithuanian Association of Chambers of Commerce, Industry, and Crafts, retorted.

And for China’s foreign minister, Wang Yi, all that added up to what he called an EU “cognitive split” on Chinese policy.

“There seems to be some kind of ‘cognitive split’ in Europe’s China policy. It is hard to imagine that, on the one hand, it has established a comprehensive strategic partnership with China and on the other hand, it has positioned China as an institutional opponent,” Wang told state media on Thursday.

“We urge some external forces to respect the facts, follow the global trend, stop undermining the rule of law in [Hong Kong] … stop colluding with those suspected of endangering China’s national security, and stop interfering in China’s internal affairs including Hong Kong affairs under any pretext,” a Chinese Foreign Ministry spokesperson also said.